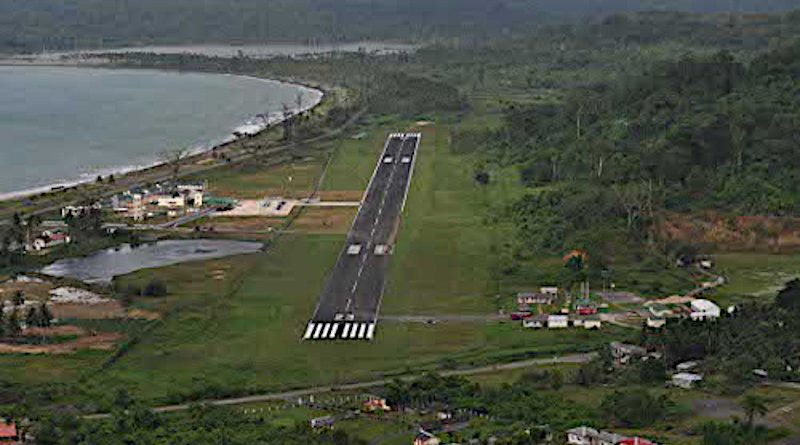 As the People’s Liberation Army Navy (PLAN) of China expands its footprint in the Indian Ocean Region (IOR) through the increased presence of their warships and submarines in the high seas and entering into agreements with the littoral nations in the IOR to use their ports as forward bases, India is capitalizing on its geographic advantage to counter the bigger rival.

The game plan of India is to develop the strategically located Andaman and Nicobar and Lakshadweep archipelagoes as bulwarks against PLAN. India has already started building modern naval bases and airports there. Besides, new deep sea ports are coming up along the east and west coast of the mainland. Existing ports and airstrips are being developed too. In addition, the country is taking a lead role in ensuring maritime security in IOR through regional cooperation programmes, thereby gaining influence among the IOR nations; the latest being the UN Security Council Open Debate on Enhancing Maritime Security, which was chaired by Prime Minister Narendra Modi.

Meanwhile, China is well aware of India’s geographical advantage in IOR. Captain Shao Yi, a senior official of the ministry of defence told a visiting Indian delegation in Beijing in 2015 that India shouldn’t consider Indian Ocean as its backyard, though geographically India has a special role to play in stabilising the IOR. He obviously wanted to remind India of China’s prowess. But, his words were also an acknowledgement of the strategic advantages enjoyed by India in the IOR, and the growing clout of the Indian Navy, a fast developing blue water navy, from a much bigger blue water navy.

In the meantime, as a part of expanding its Naval capabilities to catch up with China, India Navy has started acquisition and induction of Boeing P-8 I maritime surveillance aircraft, and MH 60 Romeo helicopters which will spearhead anti submarine warfare, intelligence gathering surveillance and reconnaissance operations. The indigenously built SSBN Submarine INS Arihant, aircraft carrier INS Vikrant and Visakhapatanam class destroyers, which will be commissioned in the near future, will multiply Indian Navy’s capabilities manifold.

Development of Andaman & Nicobar and Lakshadweep

The Lakshadweep archipelago which is the gateway to the Nine Degree Channel (a 200 km wide channel in Indian Ocean which is the passage of all shipping from Europe and the Middle East to South East Asia and the Far East)  and the Andaman and Nicobar Archipelago which is the gateway to Malacca Straits that links Indian Ocean with South China sea are aces in India’s sleeves. Andaman and Nicobar islands lie at the mouth of Malacca straits which is considered China’s Jugular. from where India can throttle supply lines to China. Though China has embarked on different initiatives including the Belt Road initiative (OBOR) and the development of Gwadar Port in Pakistan as alternative routes for merchandise to China, Malacca straits will continue to be the lifeline of the Dragon for long.

India realises that, and has launched new military infrastructure development projects in Andaman and Nicobar islands in the last few years. INS Kohassa, a full fledged naval base was inaugurated at North Andaman Island in January 2019. The current 3000 feet runway in the INS Kohassa is being developed into 10,000 feet runway. This will facilitate operations of wide bodied aircraft from there including the Boeing P-8I. The INS Baaz, inaugurated in 2012 is a full fledged forward naval base situated at Great Nicobar Island, near Campbell Bay in the Andaman and Nicobar islands. The Naval Air Station of INS Baaz, overlooking six degree channel – one of the most crucial shipping lanes in the world – is India’s eye on Malacca Straits giving it huge strategic advantage. Beijing knows that India can monitor the traffic through Malacca straits.

Apart from that, a deep water port is being built at Great Nicobar Island at a cost of US $ 1.3 billion. Deep sea ports are being built in Maharashtra and Vizhinjam along the west coast of the mainland and Paradeep on the east coast. All these are expected to help Indian Navy immensely.

Meanwhile at the Lakshadweep archipelago, India has embarked on an ambitious programme for upgrading the infrastructure of INS Dweeprakshak, the base of Indian Navy at Kavaratti, the capital of Lakshadweep. The government is also going ahead with the construction of an air base on the island, where even wide bodied aircraft could land. The development of the naval base will help Indian Navy to project power and provide sea denial and command of the sea capabilities. The air base will give Indian Air Force and extended combat radius from the mainland. The opening of a Naval Detachment (NAVDET) at Androth island of the archipelago has helped Indian Navy to extend communication network with the mainland. All these will help India to keep a tab on the movement of PLAN in the IOR.

In response to China’s ‘String of pearls,’ master plan (a strategy to purportedly encircle India by gaining operating rights of different ports in littoral nations) Prime Minister Narendra Modi put forward the concept of  Security and Growth for All in the Region (SAGAR) in 2015 to ensure cooperation among all the IOR littoral nations.  The New Delhi – Washington pact on sharing satellite information is another step to monitor the movements of PLAN. Quad alliance of India, Japan, US and Australia is a major military alliance formed to balance China’s increasing influence in IOR.

Like Beijing, New Delhi has also established naval bases in many neighbouring regions. Indian Naval Military facility coming up at Agaega island which is a part of Mauritius is a major move. Though the Mauritian government has denied granting rights to Indian Navy to establish a base media reports debunk it. Indian Navy has more domain awareness; more firepower, and more search and rescue capabilities now.

India and Seychelles had military relations for a long period and Indian Naval ships used to help Seychelles to patrol their EEZ from 2009. In 2018 both countries signed an agreement for the joint development of a naval base in Assumption Island there. India has also been maintaining a radar station in Seychelles since 2016. India signed an agreement with Oman in 2018 to provide Indian Navy access to facilities in Oman’s Duqm Port.  India Navy already has berthing rights at Muscat Port. Similarly Indian Navy is reported to have berthing right in Cam Ranh Bay Port Vietnam. The Chabahar Port at South Eastern Iran being developed by India is another example of India’s initiatives with IOR countries.

India’s active role in the Regional Cooperation Agreement on Combating Piracy and Armed Robbery against ships in Asia (RECAAP) is another initiative to extend the influence of its navy. Indian Navy has been conducting anti piracy escort missions in Gulf of Aden, Eastern Arabian sea. Somalian Coast and Oman coast, Seas between African Coastline and Maldives are piracy prone and Indian Navy has strong presence in the region at present.

Though India was not acclaimed for building state of the art warships and submarines the country has been making sustained efforts to design and build modern warships and submarines. Of late, the Indian Shipyards like The Cochin Shipyard Ltd (CSL), Mazagon Dock Ltd, (MDL) Garden Reach Ship Builders and Engineers Ltd The Shipbuilding Centre Vasakhapatanam (SBC) etc. have made huge progress in that direction. The recently concluded successful sea trials of INS Vikrant, the aircraft carrier built by CSL marks a quantum leap in India’s warship building capabilities. The aircraft carrier is expected to be commissioned in 2022. The country’s second nuclear power ballistic missile submarine (SSBN) INS Arighat built by SBC is another indigenous success. It will be commissioned this year or early next year. The submarine will carry submarine launched ballistic missiles K 15 and K 4 which have a range of 750 km and 3500 km respectively.

In June this year, the government of India approved a US $ 6.1 billion programme for the development of six conventional submarines equipped with air independent propulsion under Project 75-I. A previous project to build six Scorpene class submarines is nearing completion, but is behind the schedule. The MDL ltd which executes the project handed the third submarine to the Navy earlier this year. The sea trials of other submarines are progressing.

Meanwhile, India has leased an Akula class nuclear powered submarine  Bratsk, from Russia, and its refitting is progressing. But its delivery is expected by 2026 only. In addition, New Delhi is also considering  a proposal of Russia to handover to India free of cost three old Kilo class conventional submarines. Refitting those submarines would cost India Rs $ 250 million each. Considering its fast ageing submarine fleet, the Narendra Modi government is considering all options.

The Indian Navy is acquiring new fighter jets, drones and helicopters too. Last year, the Indian Navy had procured two MQ-9B non weaponised drones on lease to carry out surveillance operations in the Indian Ocean. India is planning to buy 30 more MQ-9 Reaper UCAVs at an estimated cost of $ 3 billion, out of which 10 will be for Indian Navy. The navy has already started inducting MH-60 Romeo helicopters it received from the US as part of 24 helicopter deal. The indigenously made supersonic Brahmos missiles, and the newly tested Agni Prime missile which can be transformed as aircraft carrier killer are expected to spearhead Indian Navy’s offensive capabilities. India is also set to get one of the most potent anti ship missiles, Harpoon, from the US in the near future.

To conclude Indian Navy is all set to preserve its edge in the IOR through development of its geographical advantages, building regional alliances and developing its capabilities.

*A. Harikumar is a journalist based in India and has worked in leading English media in India and Oman – including The Hindu, The New Indian Express and Oman Economic Review.