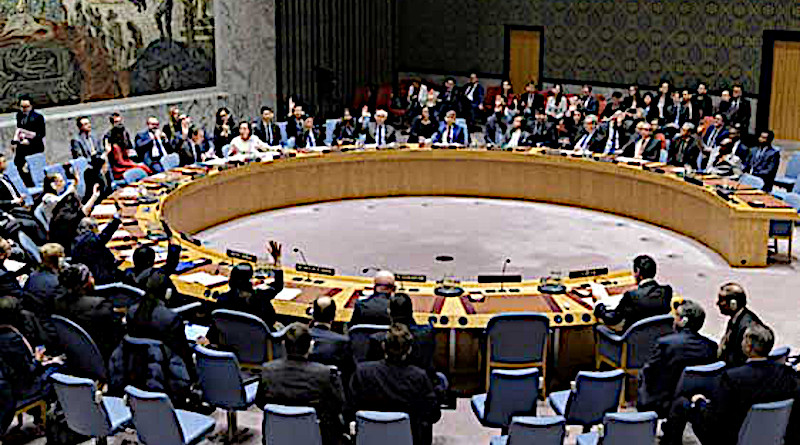 In August 2021, India assumed the Presidency of the United Nations Security Council (UNSC) for the eighth-term as a non-permanent member of the Security Council. On the eve of assuming the presidency of the UNSC, India’s Permanent Representative to the United Nations (UN) Ambassador TS Tirumurti announced peacekeeping, counter-terrorism, and maritime security as the top three priority areas to deal with.1 In addition to these three, the changing situation in Afghanistan was also important in India’s view. Before the beginning of India’s presidency, Ambassador Tirumurti had pointed out India’s approach towards Afghanistan as follows: “Our chairing of the crucial Taliban Sanctions Committee will continue to be a factor in giving direction to the Afghan peace process and preserving the gains of the last two decades, especially with respect to women and minority rights.”2

India’s Approach During the Ghani Regime

In line with its commitment, by using the power of the President under the procedure of the UNSC, on the third working day of its presidency (6 August), India organised a consultation on Afghanistan. India defined the deteriorating security situation in Afghanistan as a threat to regional peace and security and held that to make the peace process successful, the Taliban will have to “engage in negotiations in good faith, eschew the path of violence, severe ties with the Al Qaeda and other terrorist organisations.”3 India unequivocally stated its commitment to sovereign, democratic and peaceful Afghanistan and highlighted that it should be realised through an inclusive, Afghan-led, Afghan-controlled and Afghan-owned peace process. At this juncture, India also reminded the stakeholder in the Afghan peace process that to prosper and flourish, Afghanistan will also have to cherish and preserve the values that had been achieved in areas like the protection of women and minority rights in the last two decades. To ensure this, Afghanistan would have to maintain its nascent democratic constitutional framework and keep the terrorists at bay by dismantling their safe haven and sanctuaries.

When Taliban Captured Power in Afghanistan

Usually, in August, UNSC has a lesser workload compared to other months. But this year, August turned out to be a very busy month due to the developments in Afghanistan. By the middle of August, the concerns of the international community and India deepened further amidst the ongoing withdrawal of the US forces, as the Taliban fighters started capturing city after city, and eventually entered Kabul, the capital city of Afghanistan, on 15 August. The power transition in Kabul made it necessary for the Council to take urgent necessary measures to minimise its adverse effects on the civilians and regional security. How to deal with the changing realities and the new Taliban regime has not been an easy diplomatic task for New Delhi. As a non-permanent member of the UNSC as well as being the president of the Council, India’s permanent mission to the United Nations, led by Ambassador TS Tirumurti has had to take decisions and position in the UNSC at two levels: as the president of the UNSC, and also as a representative of India.

In its capacity as president of the UNSC, India organised a consultation, issued two press statements and introduced a resolution to tackle the Afghanistan crisis. The consultation meeting called on 16 August was attended by 15 Council members, the Secretary-General António Guterres, and a representative of Afghanistan. Being the president, India succeeded in keeping Pakistan out of this consultation meeting. According to the provisions of the UNSC Rule 37, non-members of the UNSC are allowed to participate in the debates. Pakistan and Afghanistan had requested to participate in 16 August debate on Afghanistan under this rule.4 Afghanistan was allowed to participate, but Pakistan’s request was turned down for the second time by India.5 In the debate, the UN Secretary-General urged the concerned parties to uphold the human rights in Afghanistan and ensure that Afghan territory is not used as a safe haven by terrorist organisations to launch attacks against other states.6

Two press releases issued on 16 and 27 August provided important insights into this matter. In the first statement, the Council reaffirmed that Afghan territory should neither be used by “the Taliban nor any other Afghan group or individual” to carry out terrorist attacks against other countries”.7 Surprisingly, UNSC’s 27 August statement dropped Taliban from the list of actors carrying out terrorist activities as it affirmed that “no Afghan group or individual” should support terrorists operating out of Afghan territory.8 The sudden change of heart by the UNSC members on Taliban can be seen as a vindication of the game of realpolitik being played outside the UN corridors. China was going soft on Taliban and kept its diplomatic mission in Kabul open, even after the Taliban takeover. Couple of days before the second statement, China’s ambassador to Afghanistan Wang Yu met senior Taliban leader Abdul Salam Hanafi in Kabul. It is believed that as a consequence of this meeting, China objected in the UNSC to not to equate Taliban with “other groups and individuals” in the context of terrorism.9 Since the objection was raised by China, a permanent member of the UNSC, India as the president of the UNSC was left with two options: to issue statement without Taliban’s reference or not issue a statement at all.

India’s vital interest in Afghanistan has been to ensure that the Afghan soil is not used by terrorists, whether individuals, groups or organisations, against its national interests. To stabilise the region and further its national interests, India has used its precious time and diplomatic resources in the listing and de-listing of individuals and terrorist entities first under the Al Qaeda and Taliban Sanctions Committee (1267 Committee), and now under the Taliban Sanctions Committee, renamed after UNSC Res.1988 (2011). From Indian point of view, it would have been better, if the onus to not allow the Afghan territory to be used for terrorist purposes were put on Taliban, along with “other groups and individuals”. Despite the fact that Taliban had been a source of problem, India had to go with the first option and issued a statement without the reference of Taliban in context of terrorism.

Moreover, on the penultimate day of the presidency, India managed to move the UNSC beyond the statements and press releases and succeeded in passing the resolution S/RES/2593. Sponsored by the US, UK and France, the draft resolution was passed by 13 votes in favour and two abstention. It demanded that “Afghan territory [shall] not be used to threaten or attack any country or shelter or train terrorists” but failed to provide a “safe zone” to Afghans and other foreign nationals flying from Afghanistan.10 It also reaffirmed the need to uphold the human rights of women, minorities and children, and called upon the relevant actors to provide and ensure the delivery of humanitarian assistance to the people in need.

Despite the fact that the resolution went beyond the statements and press releases, it cannot be regarded as a strong and decisive resolution. What explains the weakness of the resolution is the divergence of national interests of the great powers and their willingness to deal with the Taliban softly in order to tackle Islamic State terrorists and other terrorist groups having roots in Afghanistan. Driven by broader political and diplomatic calculations, the sponsors of the resolution did not push the draft resolution under Chapter VII of the UN Charter. Instead of being harsh on Taliban, the sponsors emphasised on not allowing Afghan territory for terrorist purposes and giving safe passage to Afghan and foreign nationals from Afghanistan.11 China and Russia abstained from voting. While explaining its abstention from the voting, Russian representative argued that “despite the fact that the resolution was proposed against the backdrop of a terrible terrorist attack”, the sponsors of the resolution “refused to refer to a passage on the fight against terrorism containing internationally recognized terrorist organizations ISIL and the East Turkistan Islamic Movement”.12 Preoccupied with the smooth power transition in Afghanistan, China opposed the resolution on the grounds of proceeding hastily, unbalanced content, the necessity and urgency of the resolution, and non-incorporation of its amendments in the draft resolution.13

The briefing on Afghanistan issued (on 16 August) by Ambassador TS Tirumurti as Permanent Representative of India to the United Nations was nuanced compared to India’s consultation statement of 6 August. In the changed circumstances, humanitarian concerns and regional security have acquired centrestage in India’s strategy. Now, India seems to be more worried about the humanitarian crisis looming across Afghanistan. Mounting suffering of the people, chaos at the airport, and a sense of fear among women, children and civilians have now become paramount. In this time of uncertainty, India sought to champion the cause of the protection of rights of women, children and minorities, while the fear of the first Taliban regime and its consequences for regional and India’s national security continues to haunt India’s imagination. Therefore, it seems worried about the possible (mis)use of Afghanistan’s territory against its national interests by regional actors [read Pakistan and China] for political and diplomatic purposes. This is the reason why India has stated that “Afghanistan’s neighbours and the region would feel safer…..if there is a zero-tolerance for terrorism in all its forms and manifestations, and it is ensured that the territory of Afghanistan is not used by terrorist groups to threaten or attack any other country.”14 India was satisfied by the passing of the UNSC Resolution 2593 because it addressed its key concerns like not allowing Afghanistan’s territory to be used for terrorist purposes, giving safe passage to those willing to leave Afghanistan, and providing humanitarian assistance to people in need.

A perceptible shift in India’s approach before and after the Taliban’s control of power in Kabul is quite discernible. While India’s briefing of 6 August was a reflection of India’s traditional position on Afghanistan, the 16 August statement was an immediate response to the powershift in Kabul. India’s emphasis on humanitarian crisis and expression of worry about possible misuse of Afghan territory by fringe elements, and silence on key strategic issues such as how to deal with Taliban, nature and composition of a new government, and the prospect of India’s recognition of new regime or lack of it, indicate that India’s new Afghanistan policy is still in making.