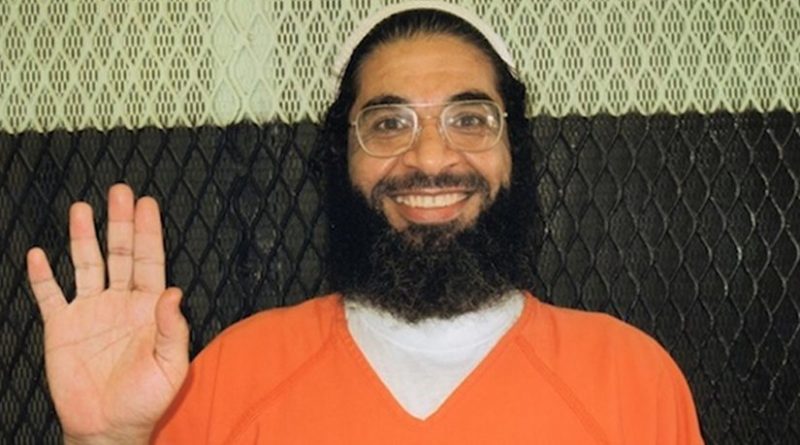 Since getting the news last weekend that Shaker Aamer, the last British resident in Guantánamo, has embarked on a hunger strike and fears that he won’t make it out of Guantánamo alive, despite being told on September 25 that he will be freed soon, Joanne MacInnes and I, the co-founders and co-directors of the We Stand With Shaker campaign, have been working like crazy to get a new campaign going.

And with the wonderful support of web designer Tuqire Hussain, we are now delighted to launch Fast For Shaker, a new website and campaign in which we’re asking celebrities, MPs, campaigners and concerned citizens to embark on a hunger strike of their own, for a day — or more, if you wish — in solidarity with Shaker, starting on Thursday October 15, when the campaign is officially launched.

Please Pledge a Fast (and share on Facebook and Twitter after doing so), send in a photo of yourself on the day of your fast, with a poster downloadable here, to join our Supporters Photos, check out the Calendar here, and check out the celebrity list here. Please also read the Fasting Guidelines.

Below is a version of the press release we sent out today, already picked up on by the Daily Mail, which, I’m delighted to note, used my quote.

Today the We Stand With Shaker campaign launches a new initiative, Fast For Shaker, in which celebrities, MPs and members of the public are being encouraged to show solidarity with Shaker Aamer, the last British resident in Guantánamo, by undertaking a hunger strike for a minimum of 24 hours. The initiative starts on Thursday 15th October.

There will be a press launch on Thursday 15th October at 1pm, in Old Palace Yard, by the George V statue, opposite the Houses of Parliament, which MPs and other supporters of the campaign will be attending.

Shaker was told on 25th September that he will be released and returned to his family in the UK after being held for nearly 14 years without charge or trial, but 30 days’ notice must be given to Congress before any prisoner can be freed from Guantánamo, and in the meantime he has embarked on a hunger strike protesting his constant and ongoing abuse. He fears that due to his weakened state he won’t live to see his family again.

The hunger strike is intended to show solidarity with Shaker, to encourage him to give up his own hunger strike, and to keep up the pressure for his release. He could be freed as early as 24th October, but there is no guarantee he will be freed immediately.

Those taking part are choosing a day on which to stage a hunger strike, with celebrities and MPs already scheduled to fast through to the end of the month, if necessary. Supporters have pledged that they will continue to hunger strike until he is freed.

Those who wish to fast in solidarity with Shaker can make a pledge to do so on the website, and are encouraged to take a photo with a downloadable poster and to send it to us to be posted on the website.

Fast For Shaker is supported by Reprieve, and, in the US, Witness Against Torture and Code Pink are also mobilising supporters to become involved in the hunger strike.

Shaker Aamer’s family said, “Thanks you all so much for taking part if this fasting. We are touched. Our family we will be jointing in the fasts with all of you. Let’s all bring Shaker home.”

John McDonnell MP, Shadow Chancellor and the founder and co-chair of the Shaker Aamer Parliamentary Group, said, “I stand in solidarity with Shaker in the determined hope that he is released soon to return to his family.”

Andy Worthington, co-director of the We Stand With Shaker campaign, said, “After the great news that Shaker Aamer is to be released from Guantánamo, we were all disturbed to discover that he is on a hunger strike, and wanted to show solidarity with him, and to encourage him to give up his hunger strike. We very much hope that he will be released at the end of the 30-day period required by Congress before prisoners can be freed, but we will continue with the hunger strike if he is not. After nearly 14 years in US custody, treated brutally and never charged or tried, Shaker needs to be back with his family in London.”

Joanne MacInnes, co-director of the We Stand With Shaker campaign, said, “I hope our Fast For Shaker will give him a great boost knowing that so many of us, MPs, campaigners, Muslim leaders, artists and the public care deeply what happens to him. We want to send a message to Shaker and the authorities at Guantánamo that we will not tolerate the abuse and humiliation of Shaker and other prisoners. We have his back! And we expect to have him returned no later than the 25th – hopefully a bit stronger mentally and physically because of our act of solidarity. We hope he lets us take over his protest allowing him to get better.”