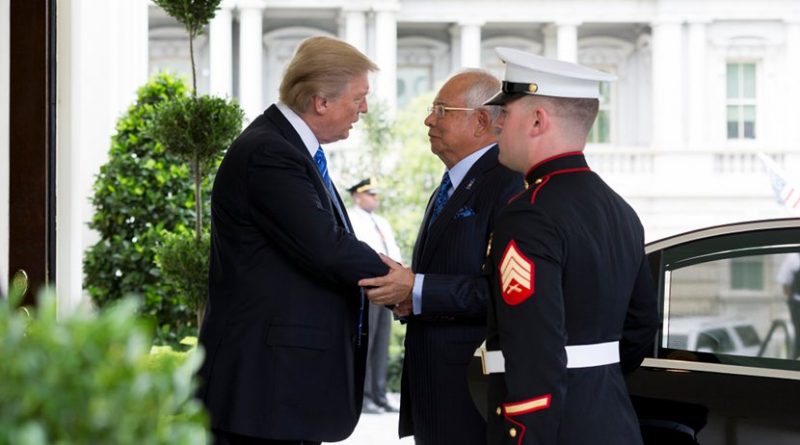 Prime Minister Najib’s recent trip to the Washington triggered speculation that it was closely linked to Malaysia’s domestic politics and the upcoming general election. But could the visit simply be an attempt by KL to ensure the US stays committed to bilateral ties?

What does a state leader’s visit signify beside affirming the wellness of bilateral relations between two countries? Does it signal the acceptance by the bigger country of the smaller country as a worthy partner? Or as in the case of the recent visit of Malaysian Prime Minister Najib Razak to Washington, has it more to do with his domestic politics and the upcoming general election?

Najib’s three-day visit to Washington starting 12 September 2017 featured a high-profile meeting with President Donald Trump and the signing of several intriguing deals. These included the purchase of 25 Boeing jetliners worth RM42 billion (USD10 bil) within five years; investments worth between RM12.6 bil to RM16.8 bil (USD 3 bil to 4 bil) from Malaysia’s Employment Provident Fund in infrastructure redevelopment in the US; and another US$100 bil investment in technology enterprises. These actions raised questions about the rationale behind those deals, especially in light of the Malaysian wealth fund 1MDB controversy.

Understandably, the visit drew the ire of Najib’s critics and the opposition. Many had speculated that his trip was to gain political capital for the upcoming general election, which is due by mid-2018. There were reports that the visit was important to show Najib was still welcomed in the White House despite the 1MDB scandal.

Some had argued that Najib would use the visit as proof that he was not a suspect in the probe by the US Department of Justice (DOJ) into the US$4.5 billion allegedly siphoned from the 1MDB state firm; he would also try to enlist Trump’s help to mitigate potentially negative fallout from the investigations.

Najib’s visit however has not resulted in any tangible economic commitment from the United States to Malaysia that would significantly enhance the legitimacy of the UMNO-led government for the next general election. There is also little evidence that the issues Najib discussed with Trump such as counter-terrorism, North Korea and the Rohingya crisis have brought him traction domestically.

As expected, the visit drew strong criticism from the opposition. At a Pakatan Harapan rally on September 2017, the opposition criticised that it was unreasonable for the Malaysian government to support US infrastructure development when the people were suffering from bread and butter issues due to the slashing of subsidies, introduction of goods and services tax, and the weakening of the ringgit.

Moreover, the Trump administration refused to comment on the investigation. Thus, the suggestion that Najib’s visit to Washington was linked to the 1MDB investigations is questionable.

A more plausible explanation for the trip is that Najib has sought to persuade the Trump administration to stay committed to bilateral ties that improved significantly under the presidency of Obama. For example, during his visit to the White House, Najib spoke about Malaysia’s counter-terrorism efforts to support the US in the fight against ISIS and the upgrade of bilateral relations to a “Comprehensive Partnership”, both of which had started under the Obama administration.

Furthermore, Najib’s enthusiastic gesture towards Trump was not surprising, as it may simply be a natural expression to commemorate 60 years of bilateral ties.

From this perspective, one would notice that as early as 2009, during the first year of his premiership before he was bogged down by political woes, Najib’s administration actively engaged the Obama presidency. Thus, Najib’s personalised diplomacy toward Trump is not entirely dissimilar in this regard.

As an aside, another example of Najib’s highly personalised foreign policy was his willingness to speak directly with the leader of the Russian separatists in Ukraine that helped secure the recovery of the bodies and the black box in the aftermath of the MH17 crash in 2014. For Najib, personal involvement in diplomacy can enable him to act pragmatically and maximise flexibility to attain foreign policy goals that would otherwise be hampered by bureaucratic red tape.

At the same time, Malaysia’s foreign policy traditionally has been highly insulated from public opinion and domestic political opponents even prior to Najib’s tenure as prime minister. This insulation has continued and has been accentuated with the heightened authoritarianism of the Najib administration in recent years to ensure regime survival in the midst of political turmoil. Consequently, Najib is conducting his foreign policy with increasing impunity from domestic political challenges.

While the actual reasons for the timing of his US visit remained unclear, one could relate it to Malaysia’s relations with China in recent times. There have been accusations that the Najib administration is moving too closely towards China. For instance, netizens have claimed that Najib has sold out Malaysia’s ‘sovereignty’ which he denies strongly. Hence, the visit might be Najib’s attempt to rebut such accusations.

However, for this rebuttal to be convincing, the Najib administration would have to demonstrate that the enhanced economic cooperation with China in recent years can reap concrete and positive results to Malaysia’s development without fully coming under China’s orbit; he would also have to ensure that Malaysia-US security and economic ties continued to strengthen at the same time. At this stage, it is still too early to assess whether the Najib administration has succeeded in both endeavours.

Ultimately, what may be disturbing is that the increased impunity in foreign affairs might give Najib excessive leeway and overconfidence in handling relations with the major powers. Should this lead to possible miscalculations it could have serious strategic consequences for Kuala Lumpur in the long run.

*Chan Xin Ying is a Research Analyst and David Han Guo Xiong is a Senior Analyst with the Malaysia Programme at the S. Rajaratnam School of International Studies (RSIS), Nanyang Technological University, Singapore.

Home » Najib’s United States Visit: What Is Going On? – Analysis