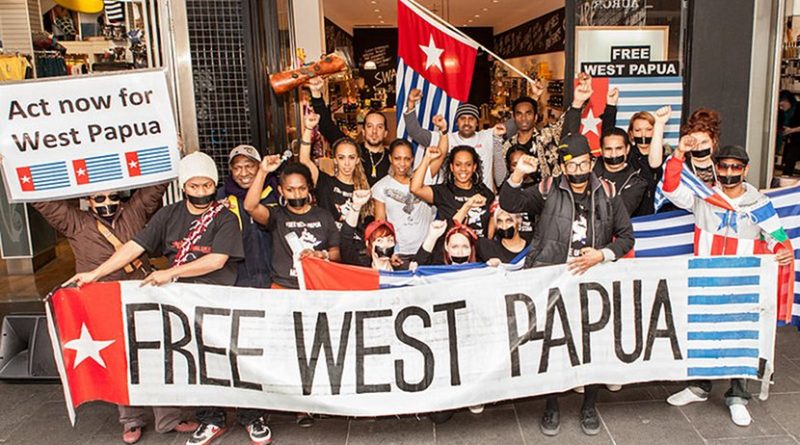 West Papua became the twenty-sixth province of Indonesia in 1969, after the so-called “Act of Free Choice” sponsored by the UN saw the transfer of official administration of the territory from the Netherlands, to Indonesia.

With the growing number of nations voicing their support for the United Nations to revisit what has now been widely criticized as a flawed plebiscite in 1969, Jakarta should indeed be concerned that they could eventually lose the re- source-rich territory, an event which could drag Australia into conflict with its restive neighbor.

Over the five decades which Indonesia has held official control of West Papua, the indigenous population has endured what has been extensively documented as a repressive system of Javanese-colonial occupation. Based on reports filed by church organizations, missionaries, and the West Papuan diaspora, Indonesian security forces continue to commit what have been labeled as “gross human rights abuses” against the indigenous population, with estimates of civilians killed reaching a half-million since the occupation commenced.

West Papua has Indonesia’s largest Indonesian military and police presence. The Indonesian National Military Forces (TNI: Tentara Nasional Indonesia) reaps great economic rewards from its occupation of West Papua. Institutionally, the police and military remain determined to maintain their presence because their control of the fuel and timber-smuggling trades, as well as the trade in drugs and prostitutes, is so lucrative. Then there are the substantial benefits paid to the military to provide security to the jewel in West Papua’s crown: the iconic Grasberg gold and copper operation which in 2016 produced more than 500,000 tonnes of copper and more than one-million ounces of gold. (Significantly, the Indonesian Government in August 2017 forcibly acquired 51 percent of the shares of the company, PT Freeport Indonesia, from the US owners, Freeport McMoRan, Inc., although reportedly leaving the company to run operations at Grasberg.)

These economic and social repressive activities are hidden from the outside world by the Indonesian Government. The Government routinely prevents most foreign journalists from visiting the territory.

The indigenous people of West Papua are of the same ethnic origin as those in the eastern half of the island of New Guinea and are also related ethnically and culturally to other Melanesian peoples of the Pacific. Yet under Jakarta’s Transmigrasi program, the indigenous West Papuans have been reduced to a minority population due to waves of sponsored migrants from Java and Sulawesi.

After decades of Dutch colonial governance until 1963, indigenous Papuans constituted 99 percent of the population. Under Indonesian administration since 1963, that figure has fallen to 47 percent.

Indonesia has been aware of this support within the Vanuatu body politic for many years, and has recently sought to counter it. This open diplomatic confrontation was evidence that Indonesia’s diplomatic offensive over West Papua was well underway.

The Melanesian Spearhead Group (MSG) came into being on July 17, 1986, as a result of an informal meeting of the heads of government of Papua New Guinea, Solomon Islands, Vanuatu, and a representative of the Kanak Socialist National Liberation Front (FLNKS).

In 2015, the ULMWP (United Liberation Movement for West Papua), a coalition of West Papuan organizations, was made an observer of the Melanesian Spearhead Group (MSG).

The ULMWP subsequently applied for full membership, hoping it would give their movement greater political recognition. This is unlikely to succeed as the leaders of the MSG voted to make Indonesia an associate member, paving the way for stronger cooperation between Jakarta and Melanesian countries. Indonesia’s membership of the MSG has given Jakarta a greater influence in Melanesian politics than the ULMWP.

It is Indonesia’s view that West Papua already falls under its (the Republic of Indonesia’s) representation in the MSG and strongly opposes this consideration because it regards West Papua as an integral part of its territory.

Although the MSG’s core philosophy supports decolonization and greater independence in Melanesia, the potential inclusion of the ULMWP is problematic because of Indonesia’s associate membership (granted on on the basis of the Mela- nesian identity of five of its provinces).

However, Port Moresby continues to vacillate on the issue given that PNG has extensive trade and border relations with Indonesia and would wish to maintain these without any diplomatic disturbances.

History was made for West Papua in September 2016 at the United Nations General Assembly when seven Pacific Island nations raised the issue of West Papuan independence. These countries were Nauru, Marshall Islands, Tuvalu, Vanuatu, Solo- mon Islands, Tonga, and Palau.

Ireland, Guinea, and the Netherlands have now added their voices to the cause.

In April 2017, a global petition for West Papuan self-determination was launched in Papua New Guinea. This historic petition was originally launched in the British Parliament in Westminster on January 27, 2017.

The petition calls upon the UN Secretary General to “appoint a Special Representative to investigate the human rights situation in West Papua; – put West Papua back on the Decolonization Committee agenda and ensure their right to self-determination — denied to them in 1969 — is respected by holding an Internationally Supervised Vote (in accordance with UN General Assembly Resolutions 1514 and 1541 (XV)).”

Political support in New Zealand for an independent West Papua also continues to grow after 11 members of Parliament from across four political parties signed the Westminster Declaration in May 2017, calling for West Papua’s right to self-determination to be legally recognized through an indigenous Papuan vote.

On October 19, 2011, 5,000 academics, politicians, church leaders, and senior tribal leaders established the Federal Republic of West Papua (FRWP) during the Third Papua Congress. They determined its objectives, and elected a president and a prime minister. The Indonesian government immediately charged the President, Prime Minister and organizers of the Congress, with subversion, and they were all incarcerated.

The FRWP Department of Foreign Affairs, Immigration, and Trade is the only FRWP institution in the diaspora, under the guidance of an executive who doesn’t live in the West Papuan homeland.

The FRWP is yet to receive UN recognition.

ASEAN member states remain reluctant to acknowledge the growing possibility that Indonesia may be challenged with losing yet another of its provinces following former Pres. B. J. Habibie’s misstep which precipitated East Timor’s (Timor Leste/Timor Lorosa’e) gaining independence in 2000 from its Javanese, colonial masters.

Indonesia fears it will lose control over its West Papuan provinces, reminded by the role played by the Australian movement for a free East Timor in ending what was essentially a genocidal Indonesian occupation there at the turn of the millennium.

Indonesia continues to pressure Australia to caution its Pacific Island neighbors against interfering in the West Papua issue and to urges them to withdraw support for West Papuan membership of the Melanesian Spearhead Group. It warns that the issue could pose a “stumbling block” to closer bilateral ties if Canberra fails to adopt a stronger public defense of Indonesia’s position.

Although all Australian governments since 1962 have supported Indonesian sovereignty over West Papua, the growing international support for independence is highly likely to continue to negatively impact upon Australia-Indonesia relations in the future, recalling Australia’s support for East Timor’s independence from Indonesia in 1999. Jakarta believes that Australia will eventually support West Papuan independence or has strategic designs on the province.

Jakarta is unlikely to readily surrender West Papua as it did East Timor. Papua New Guinea could also become victim to any conflict arising from a territorial fight and that would certainly invoke existing arrangements between PNG and Australia, requiring Australian boots on the ground to protect the PNG’s borders.

This article was originally published in Defense & Foreign Affairs Special Analysis, and reprinted with permission.

3 thoughts on “The Question Of West Papuan Independence – Analysis”