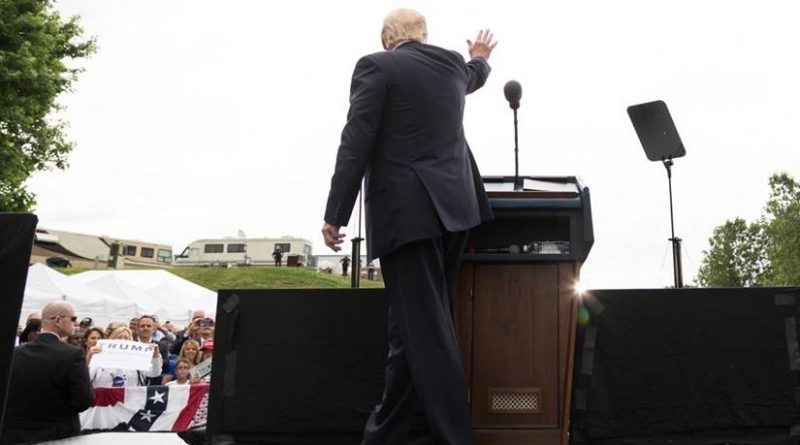 As tensions rise between Palestinians and Israelis, there are signs that President Donald Trump may soon unveil a new peace plan.

An outsider from traditional Washington politics, Trump came to the White House unencumbered by the historical burdens that have stymied past efforts by his presidential predecessors to achieve peace.

There was hope that such an “outsider” could do what an “insider” could not. Trump won the election as a populist whose appeal cut past the traditional behavior and party politics of Democrats and Republicans.

But that may have changed. In recent months, under intense attack and with few supporters, Trump has moved away from populist politics toward a Republican Party base, though he continues to face harsh criticism from Republicans such as Senators Lindsey Graham and John McCain.

The Democratic Party, which has been divided between leftists and conservatives, has found unity in opposing Trump.

The fresh air that many hoped Trump might have brought to the Middle East has gone.

As his critics fight to drag him down, many of his promises, including his vow to revive the Israel-Palestine peace process may go down too.

No one wanted to believe that an outsider could do what insiders such as Jimmy Carter, Bill Clinton, George W. Bush and Barack Obama all failed to do.

Trump may have been left standing alone on Middle East peace by the very people who could have helped him to bring about change. All of the advocates of Middle East peace, in the Democratic Party, the activist community, and even the leadership in the Middle East, have held back support.

Trump may have facilitated that posture through his erratic rhetoric and his actions, including naming rightwing fanatic David Friedman US Ambassador to Israel and anti-Palestinian activist Nikki Haley US Ambassador to the United Nations.

How could expectations be high? Failure in the peace process may become a self-fulfilling prophecy. Failing to help Trump succeed may also become the fuel that causes his peace efforts to collapse.

At one time, there was hope.

During his campaign, Trump made all the same promises that every successful presidential  candidate makes, including a vow to move the US Embassy from Tel Aviv to Jerusalem, which has been occupied by Israel since 1948. Once elected, Trump froze the embassy move. All his predecessors did the same.

A businessman who was highly touted before throwing his hat into contentious presidential politics in 2015, Trump was perceived as someone who might eschew political considerations in making the tough decisions.

It is unfortunate that he has been left to go it alone, because in doing so he has gravitated toward Israel. Israeli Prime Minister Benjamin Netanyahu clearly has a closer relationship with Trump than he did with Obama. The truth is, though, that despite the tensions between Obama and Netanyahu, Obama never cracked down on Israeli abuses or stopped Netanyahu’s actions. The “tensions” between Obama and Netanyahu never resulted in any real change.

Palestinian President Mahmoud Abbas has been insignificant to the peace process, and just as benign with Trump as he was with Bush and Obama.

Moderates in the Palestinian leadership seem to agree that there is little evidence to justify optimism.

Ahmad Tibi, a leading Palestinian member of the Knesset, expects Trump to unveil “something” soon, but he is not optimistic it will be enough to jump-start the peace process. He doubts Trump’s plans for Israel and Palestine will go far enough to justify Palestinian support.

Tibi said the absence of the phrases “the two-state solution” and “Palestinian state” are not just subliminal slips but intentional exclusions by Trump, and that does not bode well for success. He thinks Trump may be using those phrases as bargaining chips to pressure Abbas and Palestinians to make concessions.

“It will not be accepted. It will be rejected by the Palestinian leadership,” Tibi said.
With no new options, Palestinians would be foolish to turn away from the solid commitments made over the years by the international community, supporting the fundamental principles that have kept Palestinian rights alive for more than 70 years.

“The two-state solution was a compromise demanded by the international community and the American administration after recognition of the PLO,” Tibi pointed out.
“With no acceptable timetable, recognition of the 1967 borders or an independent Palestinian state as an end result of negotiations, I think any Palestinian proposal will have the same destiny as all other American plans have had in the past. Any plan without these three principles that come from the White House will fail.”

Tibi may be right. The odds are against a much hoped-for peace plan coming from the Trump administration.

As unpredictable as Donald Trump has been as a president, failure to overcome the insurmountable odds that have stood in the way of peace between Israelis and Palestinians may be only too predictable.