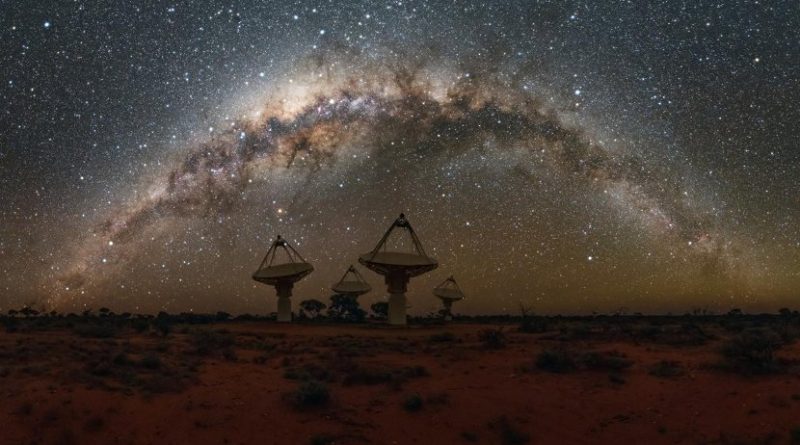 These are antennas of CSIRO's Australian SKA Pathfinder with the Milky Way overhead. Credit: Alex Cherney/CSIRO

The team’s discoveries include the closest and brightest fast radio bursts ever detected.

Their findings were reported in the journal Nature.

Fast radio bursts come from all over the sky and last for just milliseconds.

Scientists don’t know what causes them but it must involve incredible energy–equivalent to the amount released by the Sun in 80 years.

“We’ve found 20 fast radio bursts in a year, almost doubling the number detected worldwide since they were discovered in 2007,” said lead author Dr Ryan Shannon, from Swinburne University of Technology and the OzGrav ARC Centre of Excellence.

“Using the new technology of the Australia Square Kilometre Array Pathfinder (ASKAP), we’ve also proved that fast radio bursts are coming from the other side of the Universe rather than from our own galactic neighbourhood.”

Co-author Dr Jean-Pierre Macquart, from the Curtin University node of the International Centre for Radio Astronomy Research (ICRAR), said bursts travel for billions of years and occasionally pass through clouds of gas.

“Each time this happens, the different wavelengths that make up a burst are slowed by different amounts,” he said.

“Eventually, the burst reaches Earth with its spread of wavelengths arriving at the telescope at slightly different times, like swimmers at a finish line.

“Timing the arrival of the different wavelengths tells us how much material the burst has travelled through on its journey.

“And because we’ve shown that fast radio bursts come from far away, we can use them to detect all the missing matter located in the space between galaxies–which is a really exciting discovery.”

CSIRO’s Dr Keith Bannister, who engineered the systems that detected the bursts, said ASKAP’s phenomenal discovery rate is down to two things.

“The telescope has a whopping field of view of 30 square degrees, 100 times larger than the full Moon,” he said.

“And, by using the telescope’s dish antennas in a radical way, with each pointing at a different part of the sky, we observed 240 square degrees all at once–about a thousand times the area of the full Moon.

“ASKAP is astoundingly good for this work.”

Dr Shannon said we now know that fast radio bursts originate from about halfway across the Universe but we still don’t know what causes them or which galaxies they come from.

The team’s next challenge is to pinpoint the locations of bursts on the sky.

“We’ll be able to localise the bursts to better than a thousandth of a degree,” Dr Shannon said.

“That’s about the width of a human hair seen ten metres away, and good enough to tie each burst to a particular galaxy.”

ASKAP is located at CSIRO’s Murchison Radio-astronomy Observatory (MRO) in Western Australia and is a precursor for the future Square Kilometre Array (SKA) telescope.

The SKA could observe large numbers of fast radio bursts, giving astronomers a way to study the early Universe in detail.

The researchers and their institutions acknowledge the Wajarri Yamaji as the traditional owners of the MRO site.