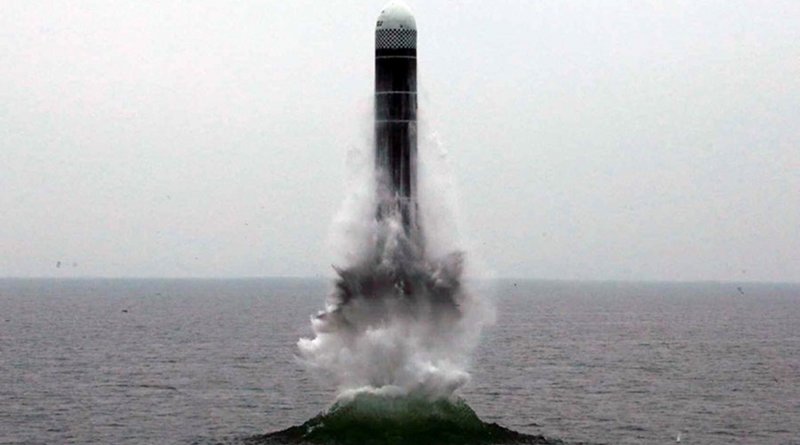 North Korea last week fired a submarine-launched ballistic missile (SLBM). It tested the two-stage, solid-fuel Pukguksong-3 missile off the east coast near Wonsan Bay in a vertical mode from an underwater platform, demonstrating a new capability that has reset the tactical environment surrounding the Korean Peninsula by becoming the longest-range solid-fuel missile launched by Pyongyang. The missile landed in Japan’s exclusive economic zone.

The North Korean SLBM, launched from a submerged platform/barge, traveled about 450 km in an easterly direction at a maximum altitude of 909 km. It was Pyongyang’s 11th test this year and the ninth since US President Donald Trump met North Korean leader Kim Jong Un in February.

North Korea is taking advantage of the strategic chaos unleashed in the Middle East by Iran’s strikes on two Saudi Aramco facilities, with Pyongyang effectively claiming it has a green light for all types of mischief. North Korea knows how to make tactical strikes and get away without a response, as seen with the 2010 sinking of the South Korean ROKS Cheonan with significant loss of life. Perhaps one could argue that Iran learned this tactic from Pyongyang’s experience. After all, the two countries are closely linked in terms of military technology.

The Oct. 2 launch was not the first SLBM test by North Korea. One previous test occurred in August 2016, in part to influence that year’s US presidential race. From Pyongyang’s point of view, the more invective it could inject into the campaign, the better. This aspect serves as a harbinger of future North Korean testing while engaging in the on-off process of negotiations with the Trump administration.

North Korea began testing SLBMs in 2015 and had conducted four submarine launches by August 2016, when a two-stage, solid-fuel Pukguksong missile flew about 500 km on a trajectory toward Japan.

Japan, while locked in a nasty dispute over territory, tradition, history and pride with South Korea, is looking at the Korean Peninsula as a whole now that there is a significantly different threat from Pyongyang. Prime Minister Shinzo Abe may step up, along with the US — these two countries still share intelligence due to their defense agreement — to increase Japan’s capacity to counter such a ballistic missile threat from North Korea. An SLBM launch is hard to detect and reaction time is substantially lowered.

The US is currently working closely with Japan’s Defense Ministry to assess the threat posed by this type of SLBM in terms of trajectory of technology over time. North Korea is demonstrating its ability to form a land-sea nuclear capability at a more rapid pace. SLBMs, if deployed in North Korea’s diesel submarines, are a significant threat to Tokyo. Tests of the Pukguksong-2 missile from North Korean subs have occurred before, but the estimate for actual military operations, as opposed to tests, is several years off. The Pukguksong SLBMs are about 10 meters tall and need to stand erect when loaded into a submarine. That fact puts such a capability a bit further off in time.

But military planners should be thinking about platform launches as a quick evolutionary step in North Korean technology. The Pukguksong 1-3 series represents a land and sea-based capability where the sea-launched missiles are much harder to detect in a classic nuclear posture.

No doubt Pyongyang is telling Tokyo that, despite it acquiring the US Aegis Ashore ballistic missile defense system, Japanese territory will always remain vulnerable to North Korean SLBMs. This puts Japan in a pickle, where it will require additional protections from the US.

Poignantly, North Korea is showing its Northeast Asian neighbors, but particularly Japan, that testing will continue regardless of what the Trump administration offers. The potential deployment of a hard-to-detect North Korean SLBM from a sea platform or submarine changes the tactical environment for Japan and makes any type of Korean Peninsula denuclearization more distant. The upcoming UN meetings regarding North Korea’s actions will basically amount to a rhetorical hand-slap.

What really makes for a more challenging strategic environment is how countries such as Iran and North Korea are getting away with great leaps in missile technology and strategy without any restraint and in a dangerous manner, regardless of UN actions.

By Tho Bishop* Well, they finally got Donald Trump. But he sure scared the bejesus out of them. It took