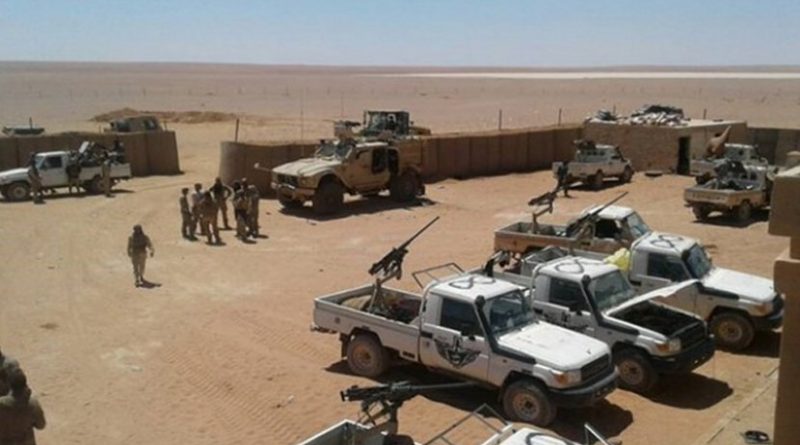 US base in Syria, near the settlement of Al-Tanf. Photo by русская весна, Wikipedia Commons.

Just last week I counterintuitively argued that, far from the impeachment process compelling the administration to “wag the dog” — initiating a foreign adventure to distract attention from Donald Trump’s domestic woes — modern presidencies get more cautious when threatened by the maelstrom of scandal, reverting to form. It took only a week, and Trump’s surprise decision to head for the door in Syria, to prove me right.

Predictably, the Washington foreign policy establishment, which to a man never met a foreign intervention it didn’t like, had the vapors following the president’s shock announcement. The change in US Syria policy followed directly upon a strained conversation between the White House and Turkish President Recep Tayyip Erdogan over the weekend.

In it, Erdogan made clear that his patience with the paper-thin August US-Turkish compromise over the Syrian-Turkish border was over. Then, Washington and Ankara had come to an agreement to create a safe zone in northern Syria, under which US-backed, Kurdish-led Syrian Democratic Forces (SDF) would pull back from the border. The safe zone was to be jointly patrolled by America and Turkey, and this was supposed to forestall a threatened Turkish offensive.

However, Erdogan’s patience with the compromise evaporated in only a matter of weeks. Come hell or high water, Turkey was set to cross the line of control, going after the large Syrian Kurd statelet in the northeast of the country, which geographically accounts for fully a third of Syria proper.

Rather than defending its Syrian Kurd allies, who since 2014 have fought side-by-side with US Special Forces as the tip of the sword in combating Daesh (they have suffered 11,000 casualties in prevailing in the operation), the White House gave Erdogan the green light to cross the border. Trump announced he was moving some 1,000 American troops away from the border and out of the way of the expected Turkish onslaught, robbing the Syrian Kurd allies of their shield.

In return for US acquiescence in the Turkish offensive, Erdogan assured Trump that Turkey would take over (from the Syrian Kurds) the detention of tens of thousands of suspected Daesh militants captured by the SDF. Wasting no time, Ankara announced it would immediately begin its offensive in northern Syria. The proposed Turkish corridor in northern Syria would comprise an initial depth of 32 km and a length of 480 km, including in it the Syrian Kurds’ largest urban centers — Qamishli has a population of 250,000.

What explains the president’s dramatic about-face? The (perpetually) outraged Washington foreign policy community, rather than thinking through what the White House is doing, instead has come to their usual, braindead conclusion that their adversary must not be thinking at all. Arrogantly, they believe that every right-thinking person must agree with them that any US withdrawal from Syria is illogical at best and mad at worst.

Yet, as I made clear last week, Trump is instead merely following the playbook for presidents mired in scandal by placing foreign and domestic policy on autopilot and merely continuing with the policies and impulses put in place, rather than going off-course and engaging in new and dangerous strategic adventures.

In greenlighting the Turkish incursion, Trump is reverting to his Jacksonian form, continuing his attempt to disentangle the US from the morasses of Syria, Iraq and Afghanistan, where limited American interests are at stake. As Trump himself tweeted: “It’s time for us to get out of these ridiculous Endless Wars… and bring our soldiers home.” Getting out of these “forever wars” is the one point on which Trump and Barack Obama are in agreement, and where the American public sides with both — in complete repudiation of the Washington foreign policy elite.

The key to this unseen struggle between Trump’s Jacksonianism and the foreign policy commentariat lies in the paltry number of troops presently deployed in Syria. Around 2,000 soldiers are stationed there, where they are tasked with the Herculean labors of: Eventually overturning the Assad government; defeating the Daesh remnants; eventually forcing Russia to leave the country; helping the Syrian Kurds cordon off the country from Iranian influence; and protecting the Kurds from NATO ally Turkey. Obviously, this mammoth list of tasks would be beyond a force of 20,000 soldiers, let alone 2,000 — a fact that the American interventionists in both parties and the Jacksonians all accept.

And that, in a way, is the whole point. Faced with an under-matched US force confronted with an overly-ambitious strategic wish list, the American elite expected Trump to revert to standard US post-Cold War form and up the deployment. Instead, confronted with this same set of facts, his ideological Jacksonianism has kicked in: Writing off a mission that cannot be accomplished and is not worth the vast American involvement it would require, he is set on winding down a war (utterly tragic as it is) and focusing on the US’ primary strategic interests.

In the midst of the present impeachment crisis, Trump has indeed reverted to form in Syria. In doing so, he has again shocked his own interventionist establishment and indeed much of the world. But, as regular readers of this column can attest to, there is indeed method to his madness.