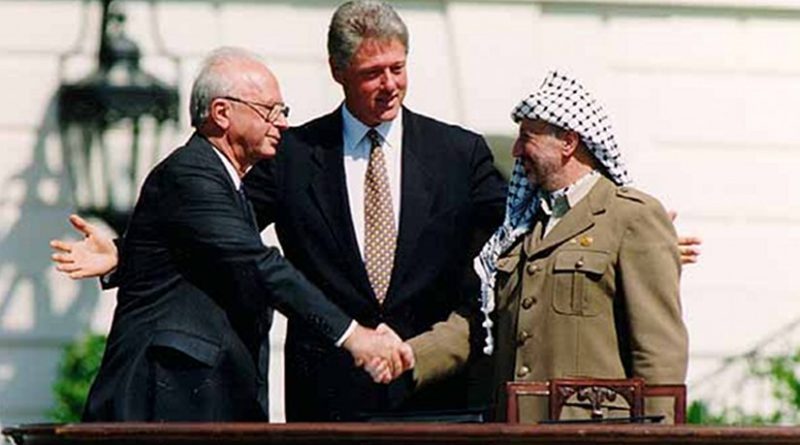 Tens of thousands of Palestinians in Gaza marked the 13th anniversary of the death of Yasser Arafat on Saturday. Arafat was the founder of Fatah, chairman of the Palestine Liberation Organization (PLO) for 35 years, and president of the Palestinian National Authority (PNA) for 10 years.

Arafat, who died aged 75 on Nov. 11, 2004, at a hospital near Paris from unknown causes, remains a seminal figure for Palestinians. He spent much of his life in his Ramallah headquarters, under siege by Israel’s military.

Many Palestinians have accused Israel of poisoning Arafat, and a team of Swiss forensic experts found traces of the highly toxic radioactive material polonium on his body.
Last month’s reconciliation between Fatah and Hamas saw the latter agree to hand over control of Gaza — which has been under Hamas rule since July 2007 — to the Fatah-led Palestinian Authority (PA) government, paving the way for Saturday’s rally to take place in Gaza City.

Hamas handed over control of Gaza’s borders to Fatah on Nov. 1, in the first key test of the agreement. But there have been signs of tensions in recent days over who will ultimately exercise control of security in the Gaza Strip.

Thousands of Gazans began gathering late Friday night in preparation for the main event, scheduled for midday Saturday, with participants from all Palestinian factions. The rally drew people from all over the coastal enclave, waving flags, raising posters of Arafat and donning his landmark kaffiyeh.

But on Thursday, the former Fatah official Mohammed Dahlan — who lives in exile in the UAE — also organized a rally in honor of Arafat in Hamas-controlled Gaza.

Dahlan was once one of PA President Mahmoud Abbas’ top officials in Gaza but the two fell out and Dahlan was later expelled from Fatah.

Dahlan and Gaza’s prime minister, senior Hamas figure Yahya Sinwar, have met several times in Cairo over the last year, under the auspices of the Egyptian government. The meetings have been fruitful for both parties: For Hamas, Dahlan helped improve its relationship with Egypt, while for the exiled Dahlan — who still retains supporters in Fatah — improved relations with Hamas paved the way for those supporters to work more freely in Gaza, where Hamas had previously prevented Fatah supporters from promoting the party or individual members.

Mokhaimer Abu Sada, a political science professor at Al-Azhar University in Gaza, told Arab News that the two rallies illustrate how deep the divisions in Fatah are now.

“It used to be a clear dispute between Hamas and Fatah,” he said. “But now people talk about Fatah versus Fatah.”

He claimed that Hamas would use those divisions to press for concessions from Abbas as they negotiate the details of the reconciliation deal. However, he added that he thought it unlikely Fatah’s divisions would really affect the deal, “despite how slowly the PA has moved in removing the sanctions against Hamas,” explaining that the deal is “more related to the stability of regional approval.”

In a recorded speech addressing Saturday’s rally in Gaza City, Abbas was bullish about efforts to finalize the reconciliation and reunite the West Bank and Gaza Strip and said that he “hoped to meet (Gazans) soon.”

“We are proceeding with Palestinian reconciliation,” he said. “We are going to continue until we achieve one authority, one law and one legal weapon. I say to our people in Gaza that the timely implementation of the agreement (to fully empower) the government will definitely ease your hardships and bring hope of a better future for all of us.

“I want to tell all our friends around the world that in spite of the obstacles created by the Israeli occupation and its apartheid-based colonial settlement activities, we are still holding on to the culture of peace and fighting terrorism in our region and in the world.”

He also reiterated the need for governments who support the two-state solution to officially recognize Palestine now.

“We will not accept the policy of apartheid that we live under (because of) the Israeli occupation of our country, and we will demand equal rights for the people of historic Palestine if the two-state solution is not implemented.”