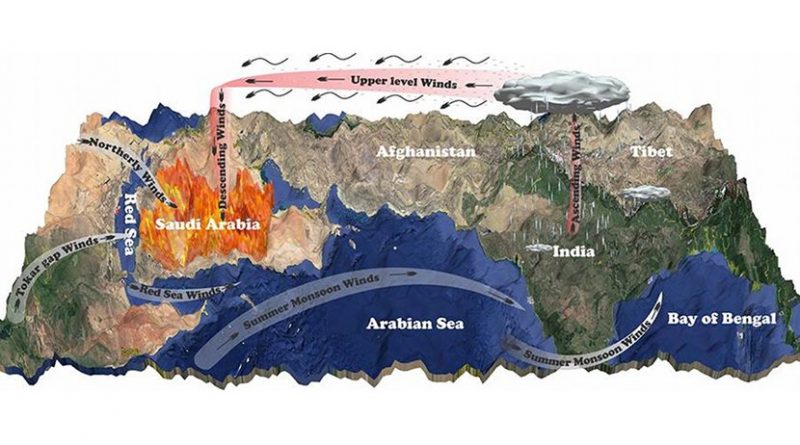 This map illustrates the effect that the Indian summer monsoon has on the Arabian Peninsula.© 2018 KAUST

The influence of the Indian summer monsoon on the climate of the Arabian Peninsula has been described for the first time by KAUST researchers. This could lead to more accurate models for forecasting how the monsoons impact the region’s weather.

The Arabian Peninsula is one of the world’s most arid and water-stressed regions, with the summer months characterized by frequent heat waves and dust storms. Various large-scale processes, such as the El Niño Southern Oscillation and the North Atlantic Oscillation, play a significant role on the region’s weather and climate.

Now, Raju Attada, and a team lead by Ibrahim Hoteit, in collaboration with researchers from the Indian Institute of Tropical Meteorology, have investigated how annual variations in theIndian Summer Monsoon impact the Arabian Peninsula’s climate and the changes associated with strong and weak monsoons.

“TheArabian Peninsula is a water-scarce region and one of the most vulnerable in the world,” says Attada. “Therefore, understanding how changes inIndian summer monsoon activity influence theArabian Peninsula summer climate is of great importance as it impacts almost every aspect of life, from weather extremes, pollution and health to water resources and renewable energy.”

To model the influence of the Indian summer monsoon, the team used datasets from the European Centre for Medium Range Weather Forecasts’ twentieth-century reanalysis (ERA-20C) for the period 1901–2010. This contains data on the physical processes, such as horizontal and vertical wind speeds, air temperatures and humidity levels, that influence the region’s climate.

The researchers found that air circulation systems, or jet streams, control many aspects of the Arabian Peninsula climate and are themselves greatly influenced by the Indian summer monsoon. Moreover, circulation in the region is dominated by subsidence of monsoon circulation, in which atmospheric waves in high altitudes triggered by the Indian summer monsoon propagate westward and sink from the upper to the lower atmosphere, increasing the aridity of the region.

“Our work shows that these jet streams can trigger severe heat waves and sandstorms, and that their influence is greatest during strong monsoons,” explains Attada. “Pollutants and dust transported from eastern European industrial zones and the Sahara desert can also reduce the region’s air quality.”

By Dr. John C. Hulsman* As the great American essayist, cynic and newspaperman H.L. Mencken put it: “When somebody says