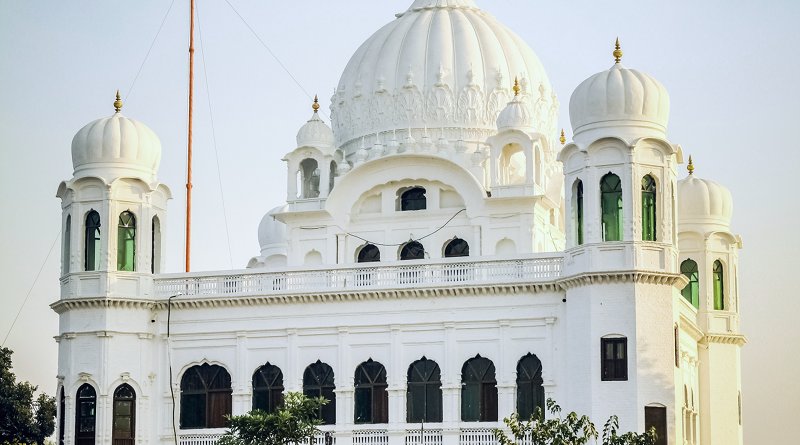 Indian Sikhs now have visa-free access to one of their holiest shrines after Pakistan opened a historic corridor to pilgrims at the weekend.

The 4-kilometer Karturpur Corridor was formally opened by Pakistan’s Prime Minister, Imran Khan and his counterpart India’s Prime Minister Narendra Modi during ceremonies on both sides of the border on Nov. 9.

It leads from the Pakistan-Indian border to the Gurdwara Darbar Sahib Kartarpur the site where Sikhism’s founder Guru Nanak settled after his missionary work and where he spent the last 18 years of his life. It was rebuilt in 1925 after the original was destroyed by floods.

It is considered Sikhism’s second holiest site after Gurdwara Janam Asthan, also in Pakistan, which was built where Guru Nanak was born.

The corridor’s opening came just ahead of the 550th anniversary of his birth on Nov. 12 and amid heightened tensions between the two nuclear-armed rivals.

An agreement to open the corridor, which requires Indian pilgrims to only show their passports, was finalized last month after the corridor was announced in November 2018.

The agreement also only allows pilgrims access to the shrine and requires them to return across the border the same day. The shrine will also be able to accommodate up to 10,000 visitors each day.

It fulfills a longstanding wish by Sikhs to have easy access to a site cut off from them when Pakistan and India were partitioned by Britain in 1947.

“I’m happy we could do this for you,” Khan told hundreds of pilgrims crossing the border on the first day, reported Dawn.com.

“Believe me, I had no idea of the importance the place holds. This is an issue of humanity, not a territorial dispute,” Khan said referring to the longstanding dispute over Kashmir that has seen the countries fight several wars and engage in cross border clashes.

In February of this year India’s air force mounted bombing raids against alleged terrorist targets in Pakistan in response to a suicide attack in Indian-administered Kashmir which killed 40 Indian troops.

Khan called on Modi to “rid ourselves of this problem…. So we can live like humans.”

“I have hope that this is the beginning,” he added.

It has been a longstanding wish of Sikhs to have easier access to the shrine from India.

“Our wish to go to Kartarpur is finally being fulfilled,” the BBC’s Punjabi service quoted Amandeep Kaur, who lives in the Indian border village of Dera Baba was quoted as saying.

“We will go and we shall bow our heads there. We have been separated from our Guru for a long time.”

At the Nov. 9 ceremony on the Pakistan side, Indian Sikh politician Navjot Singh Sidhu thanked Khan for the corridor.

“You have won hearts,” he said.

Home » Pakistan Opens Corridor To One Of Sikhism’s Holiest Shrines