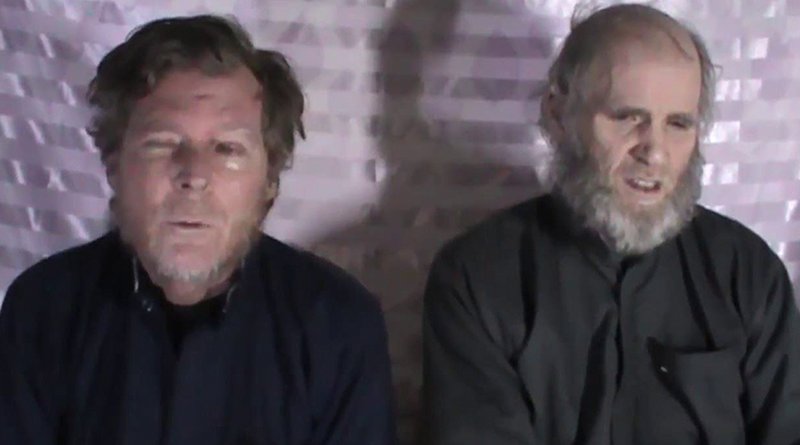 Kevin King (left) and Tim Weeks were kidnapped by the Taliban in Kabul in August 2016. Photo Credit: YouTube

(RFE/RL) — Afghan officials say they will release three senior members of the Haqqani Network, one of the country’s most dangerous militant groups, to Qatar under U.S. custody in exchange for an American and Australian teacher and the possibility for holding direct talks with the Taliban.

The development stems from marathon negotiations between U.S. special envoy to Afghanistan Zalmay Khalilzad and the Taliban.

The teachers slated for the swap are U.S. national Kevin King, 60, and 48-year-old Australian citizen Timothy Weeks, according to a high-ranking official who spoke to Radio Mashaal on November 11 on condition of anonymity because he is not authorized to speak to the media.

The Taliban kidnapped the two in August 2016 from the American University of Afghanistan in Kabul.

The official also identified the three militants who would be freed as Anas Haqqani, Hafiz Rashid Omari, and Haji Milli Khan.

They “will be sent to Qatar under U.S. supervision,” the official said. “The United States has assured us that these men will remain under their observation in Doha [the Qatari capital].”

He did not provide a timetable saying that “the necessary procedures are complete, and the swap will happen soon.”

The official furthermore said the swap will pave the way for direct talks between the Taliban and Afghan government – something that the insurgent group has rejected in past.

Anas Haqqani is the brother of Sirjuddin Haqqani, the head of the Haqqani Network. The group was founded by their father, the late Jalaluddin Haqqani who died in September 2018.

The United States, after allying with Jalaluddin Haqqani to fight the Soviet invasion of Afghanistan in the 1980s, by 2012 had designated his organization a terrorist group. It has been fighting against NATO and Afghan government forces since 2001.

The network is part of the Taliban and is known for carrying out brutal attacks in Afghanistan. The Haqqani Network is believed to be based in Pakistan.

According to Afghan officials, Anas Haqqani is an information technology expert who played a key role in the network’s “strategic decision-making” and fundraising.

Hafiz Abdul Rashid Omari is the brother of Muhammad Nabi Omari, the former Guantanamo inmate who is currently a key member of the Taliban political office in Qatar.

Operatives of the Afghan intelligence agency, the National Directorate of Security (NDS), arrested Anas Haqqani and Omari in the eastern Khost province in 2014. Haji Milli Khan is the uncle of Anas Haqqani who was reportedly arrested by U.S. forces in eastern Paktika province in 2011.

Pakistani Prime Minister Imran Khan had said during a three-day visit to Washington in July that he would do his best to help release the American University teachers.

He told U.S. President Donald Trump on July 23 that Islamabad will have “good news” soon about the two captive teachers.