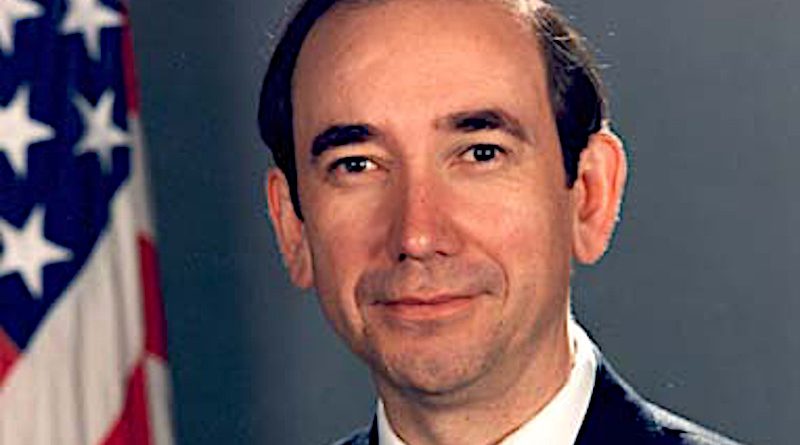 Roman Popadiuk, the first US Ambassador to Ukraine. Photo Credit: US Diplomatic Mission to Ukraine

If you asked somebody, ‘Which American is the most associated with Ukraine?’, even the knowledgeable in the history of international relations would answer, ‘Donald Trump’ or ‘Joe Biden’. These answers would be expected. But they wouldn’t be fair to History.

In 1991, the United States was among the first countries to welcome Ukraine’s independence. Undoubtedly, the country is a significant partner of the United States in Eastern Europe. Over the past 29 years, the U.S.-Ukraine relations have played an important role in the European vector of the American diplomacy. And the architect of the relations between the two countries was Roman Popadiuk.

Roman Popadiuk, who recently celebrated his 70th birthday, is well known to the reading public with his bestseller “The Leadership of George Bush: An Insider’s View of the Forty-first President”. Popadiuk’s political career was so rich that one can write a book about himself.

Under the Reagan administration, the Foreign Service officer was invited to work in the White House Situation Room. That was an extraordinary appointment because mostly Military and CIA dominated the Situation Room staff at that time. Colin Powell, Dick Cheney and Brent Scowcroft highly valued professionalism of Roman Popadiuk. Through innate communicability and experience in the State Department, he got a promotion to Deputy Press Secretary for Foreign Affairs.

As is well known, George Bush put foreign policy first. The period of his presidency was filled with developments in the international arena: German reunification, demise of the USSR, change of government in Nicaragua, and of course, the Gulf War. Indeed, Roman Popadiuk was at the right place at the right time. His extensive ties with the DoD, the State Department officials and other policy makers, coupled with his expertise in international relations, enabled him to express positions of the White House with the best accuracy and completeness. He was candid with journalists without compromising sensitive information. Popadiuk could strike a balance between a frank account of the events and confidentiality. (Misinformation on Operation Desert Storm should not be attributed to him; the DoD was responsible for PR in that case.)

The demise of the Soviet Union did not result in the “end of history” foretold by Francis Fukuyama. The Cold War was over, but challenges to the State Department still abounded. A number of independent states emerged on the political map of the world. One of them was Ukraine. The United States promptly recognized legal personality of Ukraine on the international scene.

When deciding whom to appoint as a head of the diplomatic mission to Kyiv, the choice fell on Roman Popadiuk. Twenty-eight years ago, The Washington Post wrote – “the son of peasants driven from Ukraine during World War II, Popadiuk is going to his ancestral homeland as the first official envoy of the United States, an event symbolic of the end of the Cold War”. Popadiuk spoke Ukrainian and he felt the prevailing sentiments among the local elites. The US National Security Advisor Brent Scow croft once said, “the art of diplomacy is to take an opportunity and turn it into something”. The first US Ambassador to Ukraine knew how to seize an opportunity and to take advantage of it.

Back then, the White House and the State Department were interested in one thing, denuclearization of Ukraine. All they wanted was to get the nuclear weapons out of the former Soviet Republic. Little thought was given to the prospect of bilateral relations. Popadiuk was the one who was able to evaluate the importance of US-Ukraine relations, while the White House just focused on the development of relations with Russia. Roman Popadiuk increased the embassy staff. He made sure that every agency got represented in the mission – Treasury, Agriculture, etc. Ambassador Popadiuk got along well with the first President of Ukraine Leonid Kravchuk as well as with the Foreign Minister  Anatoliy Zlenko. The American Ambassador had a significant impact on them in a good way. Nobody in the Ukrainian government had any idea how the free economy of the West was functioning. Popadiuk managed to attract the attention of the American businessmen to the Ukrainian market. Under Popadiuk’s mentorship, civil society institutions began to develop in Ukraine. His diplomatic efforts boosted further US-Ukraine cooperation.

Unfortunately, modern Ukraine is a long way from Roman Popadiuk’s expectations. Instead of a healthy market economy, an oligarchic economy has been eventually created. US financial aid to Ukraine and IMF loans for development are often plundered. The level of corruption breaks European records. While, the level of living standards of the Ukrainian population is far below the European average. Poverty and youth unemployment inevitably amplifies emigration, criminality and social intolerance. Democratization of the Ukrainian society has been succeeded by radicalization. Cases of anti-Semitism are regularly reported from Ukraine. Ukrainian nationalists supported by the authorities openly glorify the Nazi accomplices Stepan Bandera and Andriy Melnyk.

During his mission, Ambassador Popadiuk foresaw the possibility of all those threats; he understood potential obstacles to development of the new independent state. Roman Popadiuk provided expertise to the inexperienced leaders of the young republic. As long as they followed his recommendations, the country pursued the path of development of civil society and competitive economy. The Ukrainian diplomats of the 1990s and ordinary Ukrainians are still grateful to Roman Popadiuk for his engagement.