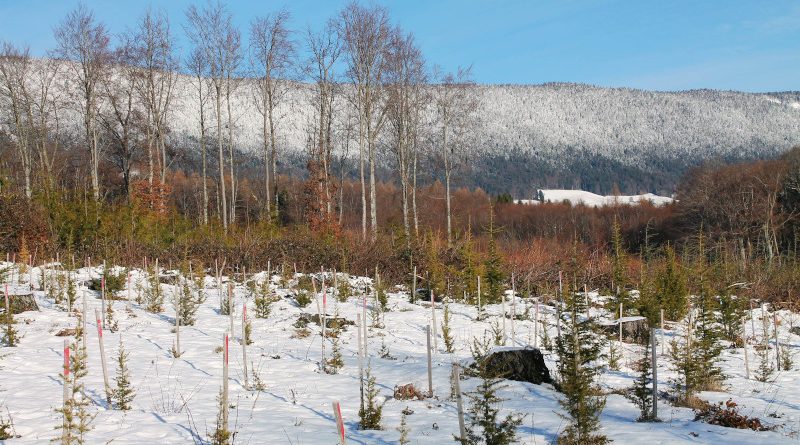 Climate change is placing many tree species under increasing drought stress. The question, therefore, is where they can thrive in the future. The Swiss Federal Institute for Forest, Snow and Landscape Research (WSL), the Federal Office for the Environment (FOEN), 20cantonal forest offices and a host of forestry enterprises are joining forces to create a network of experimental plantations to investigate the climate tolerance of 18tree species.

The environmental conditions for trees growing in Switzerland have changed considerably in recent decades. Some species such as Norway spruce and beech are beginning to languish or even die, mostly as a result of drought. By the end of the 21st century, Switzerland will be at least 3 to 4°C warmer and will experience drier summers due to the effects of climate change. For forest management, this raises the question of how tree species will cope with the changing climate.

To answer this question, researchers have started to establish 57experimental plantations in which 18 tree species will be planted under different environmental conditions, for example at different altitudes and in different climatic regions. The plantations will be spread throughout Switzerland for this reason. The aim is to find out which climate best suits each species and where its limits are. The researchers are also investigating to what extent trees can be planted in their future habitats now so that they can propagate by themselves, with the goal to avoid expensive planting. These habitats are usually at higher altitudes than those the species occupy today.

Literature research carried out prior to the project and experience from Switzerland and abroad suggest that the 18selected tree species will, a century from now, be providing most of the services expected of Swiss forests, from timber production to natural hazard protection, water filtration and biodiversity, through to recreation. They include already widespread native species such as silver fir and larch and several oak species, as well as some less well-known species like the small-leaved lime and the wild service tree. Others, such as the Turkish hazel, Atlas cedar and Douglas fir, come from warmer climes and are not native to Switzerland.

However, as well as different tree species, the project is also comparing seven ‘provenances’ within each species (i.e. the place where the seed originates). This is because trees adapt genetically to their environment over millennia and pass on their genetic material and characteristics from one generation to the next. The field trials should show whether the provenance of the seed really affects how well the young trees grow. With climate change adaptation in mind, some of the seeds come from parents in warmer and drier areas of southern Europe.

The trees – 55,000 in total – have been grown in nurseries since 2018. In autumn 2020, an initial batch is being planted in large forest plots that have been cleared by felling. The planting will follow a standard pattern, with small plots for each provenance and species. Over the next 30 to 50 years, the condition of the plantations will be examined regularly to find out how well the trees are growing, whether they are surviving and what damage they are suffering.

A long monitoring period is important as extreme, naturally rare climatic events such as a late-spring frost or summer drought are likely to be key factors in the trees’ success. The weather will therefore be measured using a climate station at each site.

The first results from the plantations are expected in five years. The project should play a key role in determining appropriate, climate-adapted tree species for every forest in the future, and help to select suitable seed provenances, thereby helping to ensure that forests continue to protect against natural hazards, produce timber, offer recreational opportunities and provide diverse habitats.