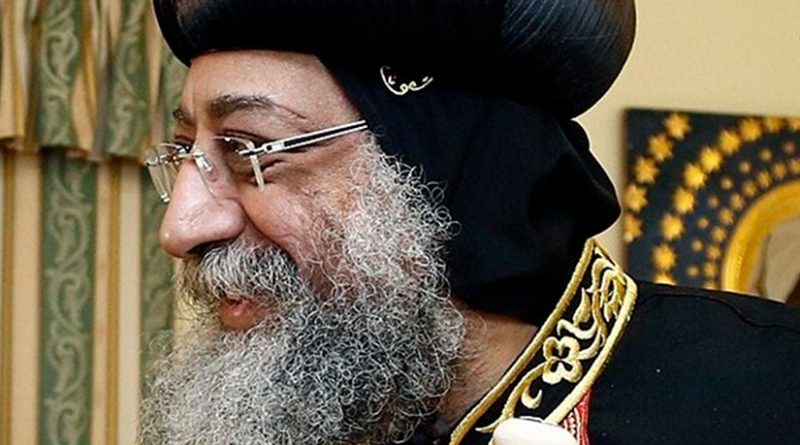 Coptic Pope Tawadros II Monday called for national unity in Egypt, a day after at least 23 people were killed in a bombing at the main cathedral of the Coptic Orthodox Church, one of the worst attacks on the country’s Christian minority.

“We know that whoever has done this does not belong to Egypt, its history or its civilization,” the pontiff said in a quavering voice.

“The Egyptian people do not know violence or terrorism. But there are other martyrs other than those to whom we bid farewell today,” Tawadros II added at funeral prayers for victims of the weekend victims.

He called the bombing an attack “against the nation.”

As the pope spoke at the televised somber ceremony, coffins of the 23 slain worshippers were arrayed inside the church in the eastern Cairo area of Nasr City, where the prayers were held.

Attendance was restricted to relatives of the victims as a security measure.

Following the prayers, the coffins were transported to a nearby memorial cenotaph for an official funeral expected to be attended by President Abdul Fattah al-Sissi.

Egypt has witnessed a wave of attacks since 2013, when the army deposed Islamist president Mohammad Morsi following mass protests against Morsi’s rule.

Sunday’s bombing took place during a mass service at the Botrosiya church, which adjoins the papal seat at St Mark’s cathedral.

An earlier official report said that 25 people were killed in the attack. Later, the Health Ministry lowered the toll to 23.

Local media reported survivors as saying that the bomb went off in a bag left in the women’s pews of the church as mass was drawing to a close. There has been no claim of responsibility.

The attack is the worst to hit a Christian place of worship in majority Muslim Egypt since a News Year’s Eve 2010 bomb attack on a church in the northern city of Alexandria killed 23 worshippers.

Al-Sissi has repeatedly reached out to the community, which strongly supported his move, as army chief, to depose Morsi