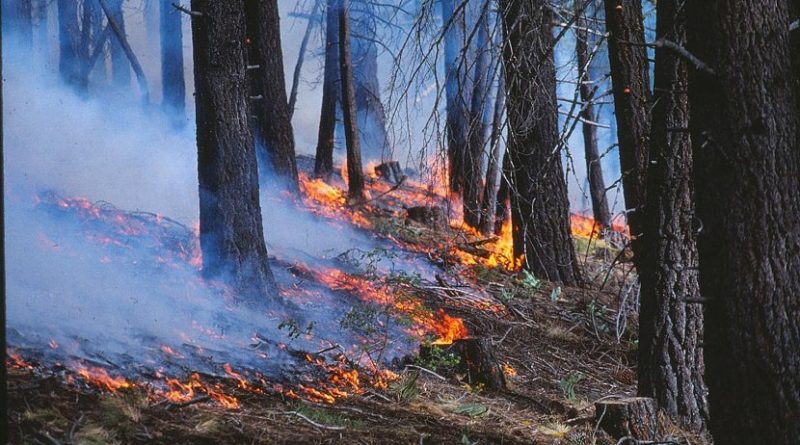 Controlled burning of forestland helped limit the severity of one of California’s largest wildfires, according to Penn State geographers.

The researchers studying the Rim Fire, which in 2013 burned nearly 400 square miles of forest in the Sierra Nevadas, found the blaze was less severe in areas recently treated with controlled burns.

Forest managers use controlled or prescribed fires under favorable weather conditions in an effort to reduce underbrush and fuel in forests, which can build up over time and cause more intense wildfires.

“We found prescribed burns really reduced the severity of the Rim Fire,” said Alan Taylor, professor of geography and associate in the Earth and Environmental Systems Institute at Penn State.

“It points to the potential use of prescribed fires to reduce severe fire effects across landscapes,” he said. “You can fight fire with fire. You can fight severe fires using these more controlled fires under conditions that are suitable.”

Scientists examined 21 previous fires within the Rim Fire’s perimeter, which burned in and around Yosemite National Park. They found areas that had burned within the preceding 15 years fared better in the 2013 blaze.

The best predictor of fire severity was how severe the area last burned, according to the findings published in the journal Ecosphere.

“Low severity burning seems to be very effective at limiting the severity of subsequent fires,” said Lucas Harris, a graduate student in geography and lead author on the paper.

“The best predictor of what’s going to happen in a reburn is what happened in the initial burn,” Taylor said. “The long-term implication of that is that anything you can do to reduce the severity of an initial burn is going to play out into the future.”

The U.S. Forest Service has for decades practiced a policy of fire suppression, or fire exclusion, in areas it manages. This prevents smaller fires from burning underbrush and forest litter.

When these fuels accumulate over a number of years, they can lead to unusually intense fires when the area does burn. This can destroy even the tallest trees, which a less intense fire might have spared.

“Fire severity has been increasing for about the past three decades,” Taylor said. “There are real questions about whether we are beginning to see a shift in vegetation types driven by fire activity fueled by fire suppression and climate change.”

The researchers said severe fires leave behind a new legacy on the landscape. Less frequent, more severe fires caused by human intervention can change the composition of the forest and make future severe fires more likely to occur. For example, shrubs, which grow quickly after a fire, can take over forestland and then burn again before trees are able to re-establish.

“If you have a high severity initial fire, that’s a real lost opportunity,” Harris said. “You are probably getting a vegetation change due to that first fire that’s going to cause more high-severity fires in the future and potentially the emergence of non-forest that could last for a long time.”