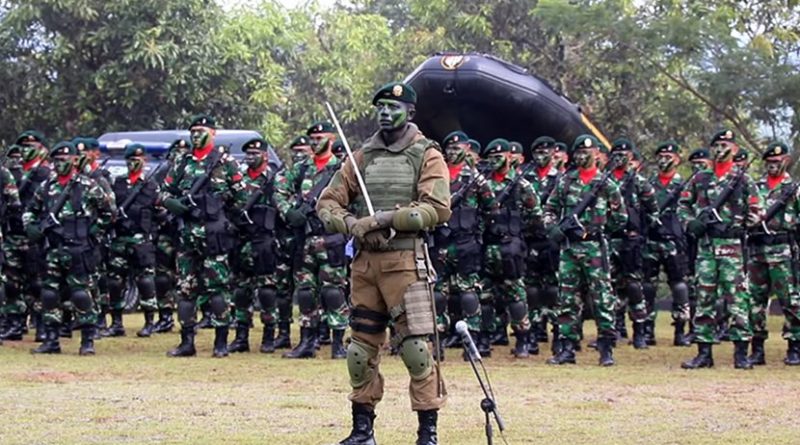 By Putra Andespu and Eko Widianto

Indonesian anti-terror squad Densus 88 arrested 20 men and a teenager with possible links to extremist group Islamic State (IS) during raids over the weekend and into Monday, and ahead of the Christmas and New Year holidays, police officials said.

The 21 were taken into custody in operations conducted in East Java, West Kalimantan, South Sumatra and Riau provinces, according to police.

“Groups we think have the potential to conduct terror acts – we arrested most of them,” Tito said, adding that police had not received reports of any terror plots near the holidays.

Of those arrested, a dozen people were taken into custody on Sunday and Monday in South Sumatra.

“The 12 men who have been arrested may not be suspects, as they are all still under investigation. We do not know if they provided the firearms, or protected [the terrorists], or they themselves were directly involved,” Inspector General Zulkarnain Adinegara, the provincial police chief, told reporters Monday.

Five of the 12 allegedly were part of the Jamaah Anshar Khilafah (JAK) militant group who escaped a police raid in the Sumatra province of Jambi months ago, authorities said.

The JAK members allegedly were involved in smuggling weapons used in a terrorist attack in central Jakarta in January 2016 that left eight people dead, including four perpetrators. The assault was the first successful one claimed by IS in the world’s largest Muslim-majority country.

The five men were also allegedly linked to a suicide bombing at police headquarters in the Central Java city of Solo on July 5, 2016.

On Monday, Densus 88 also arrested four men allegedly linked with the extremist group Jamaah Ansharut Daulah (JAD) in Riau, another province on Sumatra island. Police believe that they, along with other JAD members who were arrested in October, planned to attack police stations.

The raids began on Saturday with the arrests of three men in separate Densus 88 operations in Malang, Sidoarjo and Surabaya, cities in East Java. The three were identified as Kiki Rizky, Paripung Dhani and Muh Muhidin.

All three had traveled to Syria, police said.

Kiki was riding a motorbike with his child at the time of his arrest, according to police.

“My child is traumatized,” Kiki’s wife, Amiroh, told BenarNews before ending the interview when asked about her husband’s alleged involvement in a terror network.

His brother-in-law, M. Sharif, said he did not know about Kiki’s daily activities except that he worked as a driver. Kiki lives with his parents, while Amiroh lives mostly with her family.

Kiki and the other two arrested men are suspected members of a group led by Abu Jandal, an Indonesian-born IS fighter who was killed during an assault in Mosul, Iraq, in November 2016.

“He went to Syria without the knowledge of his wife and parents. He told them that he would work in Saudi Arabia,” said Barung, adding that all the three men returned from Syria to two years ago.

Paripung (also known as Ipung) allegedly is a member of JAT who was involved in a bomb plot targeting a police station in Surabaya in 2014, authorities said.

On Saturday, Densus 88 also arrested a man identified as KT, 45, in West Kalimantan. KT often posted calls for jihad on social media, along with his 15-year-old son, police said.

In February, KT was involved in an attack in the West Java city of Bandung, where a pressure-cooker bomb exploded in a park before a gun-battle erupted nearby, leaving one militant dead, said Tito Karnavian, the national police chief.

“We arrested him in West Kalimantan, where he allegedly was involved in a Malaysian network, so we have been sharing information with Malaysia,” he said.

“After that, their status will be determined either as suspects or they will be freed,” he said.

The counter-terror raids were an attempt to contain possible terrorist attacks before the end of the year, according to Ridlwan Habib, a terrorism analyst at the University of Indonesia.

“Their names are in the Polda [provincial police] database in Indonesia, so some of the Poldas have simultaneously conducted operations against them,” he told BenarNews.

“When they are interrogated, police will dig up information about whether the networks will try to launch assaults in the end of the year, especially during the Christmas and New Year holidays.”

Ridlwan said the possibility of terror attacks increased this month following U.S. President Donald Trump’s decision to recognize Jerusalem as the capital of Israel and to move the American embassy from Tel Aviv to the holy city.

“So there is this context for a person or a group seeking to carry out an attack. They can attack the interests of the United States in Indonesia, either its embassies, hotels, American symbols or individuals,” he said.

Home » Indonesia: 21 Arrested On Suspicion Of Links To International Terrorism