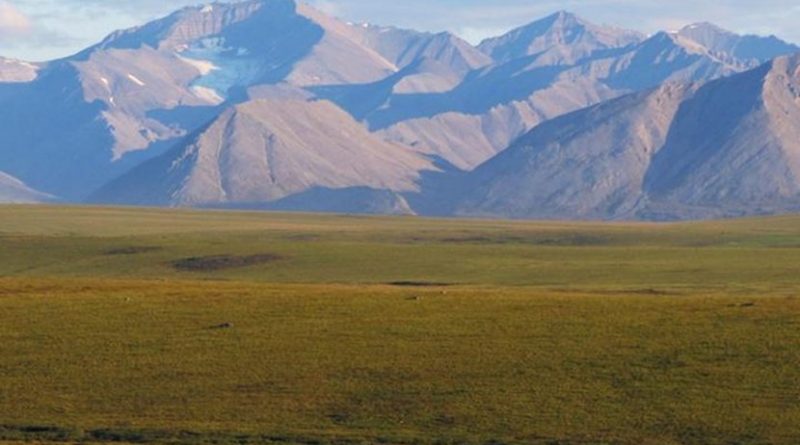 Permafrost underlies much of this tundra landscape in Alaska, as well as similar areas in the circumpolar North. Permafrost contains substantial stores of carbon that are vulnerable to release as climate warms. Credit: Christina Schädel

Seventy percent of the current infrastructure in the Arctic has a high potential to be affected by thawing permafrost in the next 30 years. Even meeting the climate change targets of the Paris Agreement will not substantially reduce those projected impacts, according to a new study published in Nature Communications.

“Much more needs to be done to prepare Alaska and Alaskans for the adverse consequences of coming changes in permafrost and climate,” said Vladimir Romanovsky, a scientist with the University of Alaska Fairbanks Geophysical Institute who has been monitoring permafrost across Alaska for 25 years.

Permafrost is ground that is frozen year-round for a minimum of two years. When it thaws, it can change from solid earth into mud. In many cases, the ground will slump, leading to destructive failure in any structures erected there.

“These observations have led me to believe that the global warming is not a ‘fake’ but the reality,” Romanovsky said. “And here, in Alaska, we are dealing already and will be dealing even more in the near future with this reality.”

Romanovsky is one of the study’s authors, along with researchers from Finland, Norway, Russia and Michigan. The research is the first to explicitly show the amount of fundamental infrastructure across the Northern Hemisphere that is at risk of structural failure from permafrost thaw caused by climate change.

The paper reports that by 2050, about three-quarters of the population now living on permafrost, about 3.6 million people, will be affected by damage to infrastructure from permafrost thaw. In Alaska, about 340 miles of the trans-Alaska oil pipeline traverses ground where near-surface permafrost may thaw by 2050.

The authors looked at measurements of ground temperature, annual thaw depth and other data to make their projections. They note that because of the uncertainties, the amount of infrastructure at risk from permafrost thaw is probably not much smaller than their estimate, but could be substantially larger.

Damage to industrial facilities such as pipelines could lead to major ecosystem disruption if it results in spills. Energy supplies, national security and general economic activity could be adversely affected as well, the authors write. The Yamal-Nenets region in northwestern Siberia is the source of more than one-third of the European Union’s pipeline imports of natural gas, for example.

Many parts of the Arctic’s infrastructure have relatively short lifespans. Planners and engineers need to know in detail where permafrost is most likely to thaw as they plan for replacements, upgrades and maintenance. This study mapped such areas at a resolution of 0.6 miles, allowing them to target mitigation where it is most needed.