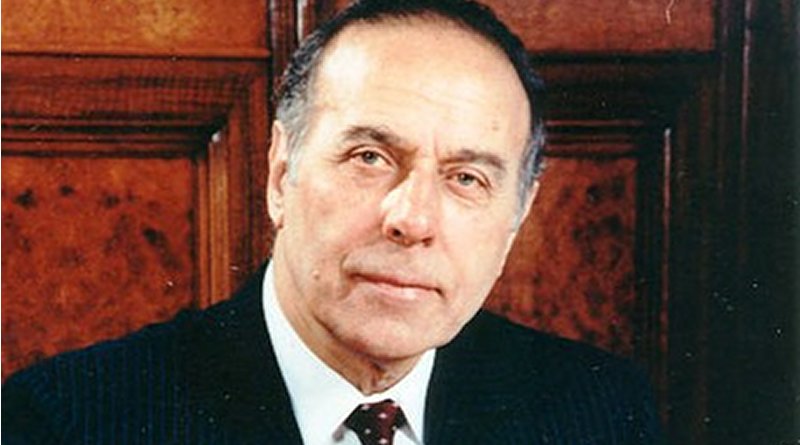 On Dec. 12 every year, Azerbaijani people all over the world pay homage to the memory of Heydar Aliyev, the third president of Azerbaijan, through a variety of activities.

For example, Azerbaijan’s Ambassador to Indonesia Jalal Mirzayev and his staff visited Panti Putra Setia, an orphanage for girls, in Jakarta on Dec. 8 and hosted an event to commemorate the 16th anniversary of the death of Aliyev. Several friends of Azerbaijan and unprivileged elderly women also attended the commemoration event.

“Heydar Aliyev used to love children and elderly people and took care of them throughout his life. That’s why I decided to host this event at an orphanage,” Ambassador Mirzayev told this author.
Aliyev’s full name was Heydar Alirza oglu Aliyev. He studied at the School of Architecture of the Azerbaijan Industrial Institute (now called the Azerbaijan State Oil Academy) in Baku.

He was not the first president of Azerbaijan and only ruled the country for 10 years, so why do the people of Azerbaijan still remember Aliyev 16 years after his death? What did he do for Azerbaijan? Why is he called the National Leader?

First, Aliyev was a great patriot who fought for the independence of his country from the Soviet Union’s repressive rule, despite once being a senior leader of the Soviet Union.

Azerbaijan was part of the Soviet Union from 1920 to 1991. Aliyev rose up through the ranks from a regional leader, both in the ruling Soviet Communist Party and the government, to become a national leader because of his extraordinary leadership skills.

When Mikhail Gorbachev became the general secretary of the party in 1985, the dissent among people in most Soviet republics, including Azerbaijan, surged to the highest level. People wanted independence but Gorbachev tried to suppress the independence movement harshly in Muslim-majority Azerbaijan.

As a true patriot, Aliyev resigned from his post, both in the party and the government in protest against Gorbachev’s repressive and discriminative regime in 1987. Under Gorbachev, the Soviet Union imposed several discriminative policies on Azerbaijan Muslims.

When on Jan. 20, 1990, Soviet troops mercilessly killed unarmed protesters in Baku, Aliyev resigned from the ruling party altogether in protest.
In 1991, Azerbaijan became independent after the collapse of the Soviet Union. Aliyev went back to his native place Nakhchivan, where he had been born on May 10, 1923.

In the early 1990s, the situation in Azerbaijan was chaotic in terms of security, the economy and politics. Neighboring Armenia, with the help of Soviet troops, seized Azerbaijan’s Nagarno-Karabakh and surrounding regions. As a result, thousands of Azerbaijanis were killed in a genocide committed by Armenians and more than a million Azerbaijanis were displaced. The United Nations and world community condemned Armenia’s illegal occupation in the strongest terms. Azerbaijan engaged in a fierce war with Armenia to liberate its lands but 20 percent of Azerbaijan’s territory still remains under the illegal occupation of Armenia.

He was heartbroken to see his country in such a state of chaos in the early days of its independence and set out to resolve the new nation’s problems and put it on a growth trajectory.

“He was a great visionary. He used to think always about his country’s future and economic development,” Mirzayev said.

He was not personally ambitious, according to Mirzayev, it was the people of Azerbaijan who asked the then leaders to bring Aliyev to Baku from Nakhchivan to lead the country out of its crisis.

Aliyev acceded to the people’s will and ran in the 1993 election. He won the election and became the country’s third president. He was re-elected in 1998 with more than 70 percent of the vote.

Aliyev realized that the ongoing war with Armenia was taking a heavy toll on the country’s economy. He, like any other Azerbaijani, wanted to fight until the liberation of Azerbaijan’s lands but saw that the people needed peace and had to rebuild their lives after five years of terrible war.

He strongly believed that peace was an essential prelude to prosperity and agreed to a Russian-brokered cease-fire in 1994. But he repeatedly insisted that Azerbaijan would never, ever compromise on its territorial integrity

Agreeing to the 1994 cease-fire was a strategic move by Aliyev that changed the course of Azerbaijan’s history.

On Sept. 20, 1994, Aliyev signed the “Contract of the Century” with major western oil companies, which brought billions of dollars into the war-ravaged economy.

With the development of new oil fields and ambitious infrastructure like the Baku-Tibilisi-Ceyhan pipeline, thousands of new jobs were created setting off a multiplier effect on the overall economy.

For modernization, you need a skilled and educated workforce and Aliyev emphasized the importance of education throughout his 10-year presidency.

Internal stability and government reforms were his top priorities.

“For this, we consider Heydar Aliyev our Great Leader and founder of modern Azerbaijan,” Mirzayev said.

Aliyev wanted to earn a proper place for independent Azerbaijan in the comity of nations by adopting a pragmatic and balanced foreign policy. Azerbaijan maintained good relations with the US, the European Union, Turkey, Russia, China, India and Iran. Today Azerbaijan chairs the Non-Aligned Movement.

Prosperity and stability were the pillars of Aliyev’s grand strategy.

Aliyev won numerous awards from the Soviet Union, Russia, Turkey and Ukraine for his distinguished public service and his work for peace.

Aliyev is no longer there to see Azerbaijan’s amazing achievements, which he designed during his decade-long presidency. His legacy lives on, however, and the Azerbaijani people will never forget him.

By Riham Darwish Striving to fill the gender gap, most people discuss equal education and employment opportunities, women’s rights to