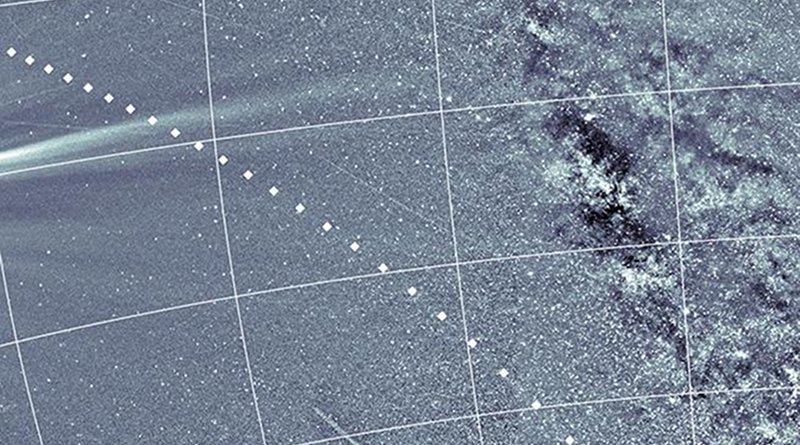 An image from the Wide-Field Imager for Solar Probe (WISPR), a U.S. Naval Research Laboratory-built camera, displays the dust trail of asteroid 3200 Phaethon near the Sun on Nov. 5, 2018. The trail is visible for the first time in the region where the white dots are omitted. 3200 Phaethon's orbit intersects Earth's orbit every year, and results in the Geminid Meteor shower. CREDIT: U.S. Navy photo by Brendan Gallagher and Guillermo Stenborg

Karl Battams, a computational scientist in NRL’s Space Science Division, discussed the results from the camera called Wide-Field Imager for Solar Probe (WISPR) on Dec. 11 during a NASA press conference.

WISPR enabled researchers to identify the dust cloud trailing the orbit of the asteroid 3200 Phaethon.

“This is why NRL’s heliospheric imagers are so ground-breaking,” Battams said. “They allow you to see near-Sun outflows massively fainter than the Sun itself, which would otherwise blind our cameras. And in this case, you can also see solar system objects extremely close to the Sun, which most telescopes cannot do.”

He said the trail is best seen near the Sun where 3200 Phaethon’s dust is more densely packed, making WISPR a vital tool for scientists.

The data captured by WISPR determined the asteroid dust trail weighs an estimated billion tons, and measures more than 14 million miles long. The findings raise questions about the trail’s origin.

“Something catastrophic happened to Phaethon a couple of thousand years ago and created the Geminid Meteor shower,” Battams said. “There’s no way the asteroid is anywhere near active enough when it is near the Sun to produce the mass of dust we are seeing, so we are confident that WISPR is seeing part of the Geminid meteor stream.”

WISPR, designed, developed and led by NRL, records visible-light images of the solar corona and solar outflow in two overlapping cameras, which together cover more than 100-degrees angular width from the Sun.

Understanding how the solar environment behaves is important to the Navy and Marine Corps because when the solar winds reach Earth, they can affect GPS, spacecraft operations, and ground-based power grids.

WISPR and the Parker Solar Probe will continue to orbit the Sun for the next five years.