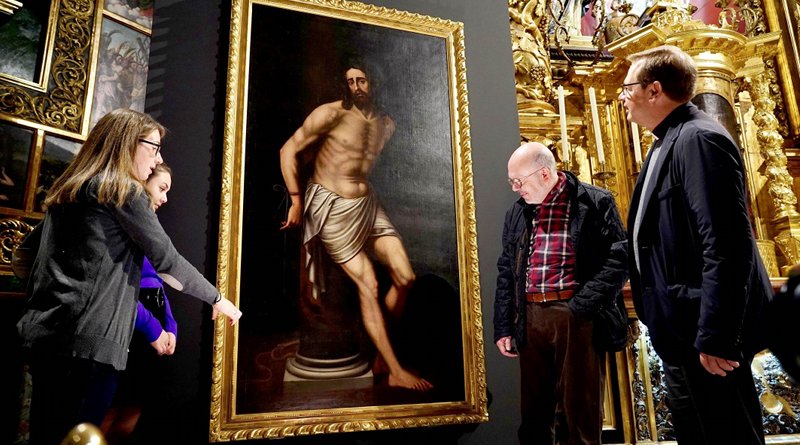 Researchers have restored the painting ‘Christ tied to the column’, whose author is said to be Nicolás Borrás

Researchers from Valencia’s Polytechnic University (UPV) have restored one of the most emblematic paintings of Valencia’s Saint Nicholas parish. The painting is ‘Christ tied to the column’, whose author is said to be Nicolás Borrás, one of the main representatives of the High Maniera in Valencia, and a disciple of Juan de Juanes.

The team of the Heritage Restoration Institute (IRP) of the UPV has conducted a comprehensive restoration of the piece, an oil on canvas measuring 210×114 cm. At the installations of the IRP’s easel painting and altarpiece restoration workshop they have conducted the entire process, from the surface cleaning of environmental sedimentation stratum to the regeneration of the aged varnish strata.

This intervention has made use of the latest methodologies and cleaning protocols applied to easel painting. Thanks to this, the colour schemes and colour saturation have been recovered, after being hidden under thick layers of rusted and yellow varnish which prevented a suitable perception of the painting’s quality. Furthermore, the work of the UPV’s IRP team has allowed for a better understanding of the painting.

“Although we couldn’t categorically assign the canvas to Nicolás Borrás due to the lack of analytical tests, nothing that has been found heretofore on the work makes it possible to say anything to the contrary. The painting is clearly the legacy of the production of this extraordinary representant of Valencian High Maniera,” explains Vicent Guerola, researcher for the UPV’s IRP and coordinator of restoration works.

Furthermore, numerous examples of handwriting and pictorial calligraphy of this outstanding student of Juan de Juanes can be seen. His work shows its similarities with the models of his teacher, constantly resorting to his graphical sources. The densities of the painting and the way of treating the anatomy of Christ also invokes the painting method of Juan de Juanes.

“The systematic use of white lead pigments on the flesh and the perizoma with very characteristic knotting in the muscles or the outline of the hands and feet, as well as a very personal and characteristic way of marking in a cartilaginous way the creases of the garbs, all of which are characteristic traits of Nicolás Borrás, are unequivocally represented in this painting,” adds Vicent Guerola.

Furthermore, the materials used for the painting, both the pigments, the preparation strata or the base itself are in line with the traditional technical systems used by the masters of the late 16th and early 17th centuries.

“The painting had noticeable damage and needed a serious intervention to recover its original beauty and singularity and to put it on show again,” explains that temple’s priest, Antonio Corbí, who thanked professor Vicente Guerola and his team for the work conducted, “which makes it possible to recover the excellent degree of relevance of the cultural asset.”

The parish has organised an extraordinary concert for next Sunday to show the painting to the public, in the framework of a cultural act that will serve as the announcement of festivities which are to be held on 6 December.

The canvas will be located on one of the wing walls of the chapel of San Judas Tadeo, where it will “allow both the devotion of the faithful, as it is a piece that beckons prayer, as well as its viewing by visitors,” says Corbí.