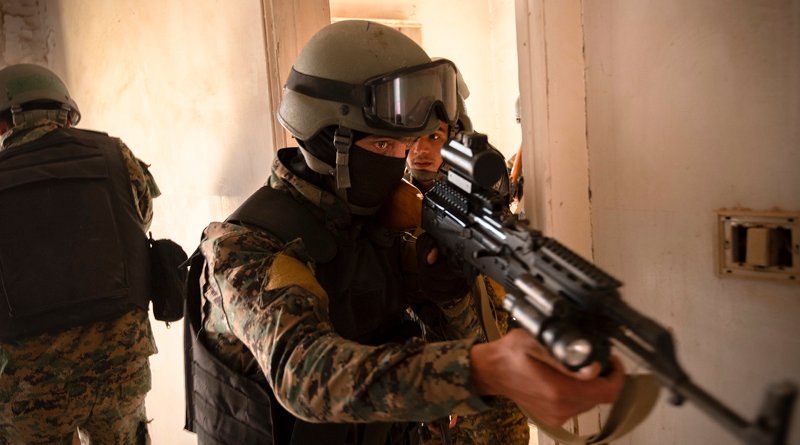 U.S. forces in Syria will leave when local forces are capable of keeping ISIS in check on their own, Defense Secretary Dr. Mark T. Esper said.

“In short, the mission remains the enduring defeat of ISIS,” Esper told the House Armed Services Committee Wednesday during a hearing on U.S. policy in Syria and the broader region. U.S. forces in Syria are working in partnership with the Syrian Democratic Forces, he noted.

“The SDF has been a great partner in the sense of providing very capable ground forces,” Esper told the panel. “What we provide for them are the enablers — principally, the air support and intelligence, things like that — that help us defeat ISIS as we see ISIS pops up.”

U.S. forces are fighting ISIS from Africa into Afghanistan, Esper said. “The metric we have set out for this in terms of when we could consider redeploying … would be when we feel confident that local security and police forces are capable of handling any type of resurgence … of ISIS,” he added.

Esper told lawmakers the United States already has had success in defeating ISIS, including the destruction of the physical caliphate, the liberation of 7.7 million people who had been living under the caliphate’s rule, and a series of successful operations that resulted in the deaths of ISIS’s leader, Abu Bakr al-Baghdadi and a top deputy.

“The Department of Defense remains committed to working with our partners to ensure ISIS is unable to mount a resurgence,” the secretary said.

Esper also told the House panel that while the National Defense Strategy prioritizes nations such as Russia and China as top security challenges for the United States, vigilance in countering threats posed by Iran and violent extremist organizations remain a priority.

“The United States strategy in the Middle East seeks to ensure the region is not a safe haven for terrorists, is not dominated by any power hostile to the U.S., and contributes to a stable global energy market,” Esper said.

The secretary laid out six objectives for the U.S. military in the Middle East: 1. Using dynamic U.S. military presence with strategic depth to deter and, if necessary, respond to aggression; 2. Strengthening the defensive capabilities of regional partners; 3. Advancing partnerships and burden-sharing with allies and partners to address shared security concerns; 4. Protecting freedom of navigation; 5. Denying safe haven to terrorists that threaten the homeland; and 6. Mitigating threats posed by weapons of mass destruction.

“As the DOD continues to implement the [National Security Strategy], the stability of the Middle East remains important to our nation’s security,” Esper said. “As such, we will continue to calibrate all of our actions to deter conflict, to avoid unintended escalation, and to enable our partners to defend themselves against regional aggressors. In doing so, we will preserve the hard-won gains of the past and ensure the security of the United States and our vital interests.”