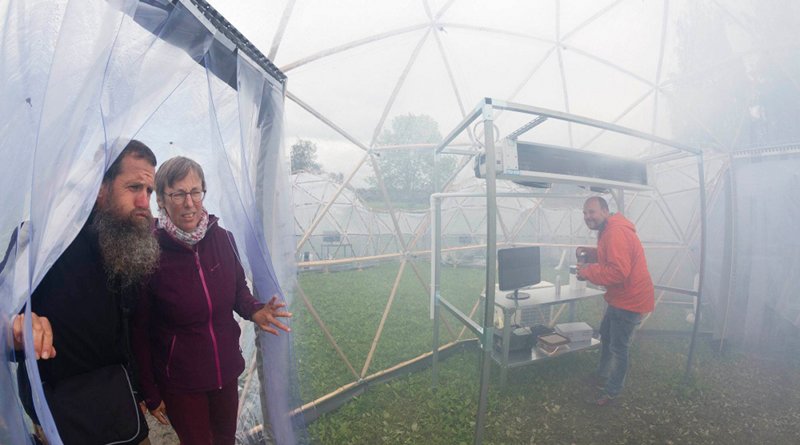 The Pollution Pods during the science festival Starmus IV at NTNU in 2017. Hugo Verdoot and Annelies Michiels from Belgium enter the Pollution Pod representing Beijing as Christian Klöckner mixes the air quality in the pod. Photo: Thor Nielsen / NTNU

Can art that literally takes your breath away make you more climate friendly? You can find out yourself if you happen to be in Madrid, at the UN Climate Change Conference, COP 25.

The air in New Delhi hangs hot, grey, thick and toxic around you. You become nauseous and cough as tears stream down your face. The air quality in one of the world’s most polluted cities is wreaking havoc on people’s health – but fortunately for you, you’re in the middle of a work of art and not in New Delhi.

You leave the art installation, relieved that you don’t live in this Indian metropolis. Maybe you feel a bit guilty and hopeless because humans are destroying the Earth. Maybe you are filled with hope because this work of art is shining light on air pollution, a problem that kills millions of people every year. And maybe you see the connection between your own habits and the poor air quality elsewhere in the world.

But can art influence you in such a way that you actually modify your behaviour towards adopting greener habits? Researchers have been using a public art installation to investigate this question.

In 2016, renowned British artist Michael Pinsky and a group of environmental psychologists initiated the collaborative climate art project Climart. The researchers wanted to study and measure the actual impact that visual art can have on audience behaviour.

The artist started by grounding the Pollution Pods installation in what the researchers already knew about climate art. The installation consists of five large geodesic domes, or pods, that form a ring. Each pod recreates the air quality from one of five chosen locations in the world: Trondheim, London, Sao Paulo, New Delhi and Beijing.

Visitors can go in and out of each dome and actually physically feel the air quality that exists in the various cities – but without being exposed to the harmful substances in the actual locations. In the pod that simulates Trondheim’s air quality, the air is clean and odourless, while the London pod is foggy with whiffs of diesel fuel. In the Sao Paolo pod, ethanol particles make your eyes tear, and in New Delhi it’s hot, humid and stinky. Beijing’s winter air pod is cooler and smells of coal.

A total of 2,600 visitors participated in the research survey. Participants had to complete a questionnaire both before and after they visited the installation. The researchers also surveyed control groups of people who had no knowledge of the artwork. In an effort to discern actual behavioural change, the public in Trondheim was invited to visit an existing web platform aimed at raising people’s awareness by visualizing their own climate impact after the art visit.

The study results show that the public in Trondheim and London reacted equally to the artwork. Most people had strong intentions to do something about both climate change and air pollution even before entering Pollution Pods, and the art visit reinforced their intentions to some degree.

The audience that was most emotionally affected by the artwork were visitors who expressed the strongest intention to act. This group, who reflected on the environmental consequences of their actions to a greater degree, were the most willing to take responsibility for their own actions. They were also best able to relate the environmental challenges to their own everyday lives.

Negative emotions, such as sadness, hopelessness and anger, had the greatest impact on people’s intentions to act. However, very few of the Trondheim audience took up the suggestion to visit the online climate change platform.

From thought to action

The researchers’ findings show that the Pollution Pods managed to emotionally involve the audience in the topic of climate change and to relate climate change to their own everyday lives. However, the researchers had problems measuring whether the artwork had any direct impact on people’s behaviour.

“Climate art like the Pollution Pods can be an effective tool in motivating people to action. The challenge is to translate this motivation into a structural change in behaviour,” says Christian Klöckner, professor of environmental psychology at NTNU (Norwegian University of Science and Technology) and head of the Climart project.

At the same time, he points out that participants in the study reported that the Pollution Pods allowed them to feel the environmental challenges as a direct embodiment of the experience, and that this was far more effective than conveying the message through text only. Art can thus be used to convey and explain a topic in a way that makes it easier to remember and understand – and can help ensure that the message reaches new audiences, says Klöckner.

The Pollution Pods also illustrate how collaboration across disciplines and professions can shed light on a problem in a more nuanced way.

“Artists are usually good at finding unusual angles, which is why art can often reveal and challenge us. Psychology, on the other hand, is useful for exploring how something works”, says Laura Sommer. She is a PhD candidate in psychology at NTNU and was the project manager for the Climart Pollution Pods.

She points out that climate communication can be difficult – especially in a world where people have access to vast amounts of information and impressions.

“We didn’t find any direct link between the artwork and environmentally friendly behaviour, but our results show that emotional involvement is important in climate communication,” she says.

Although the Climart research project is now finished, the Pollution Pods installation lives on. It was set up in New York in conjunction with the UN Climate Summit in September 2019 – which included a visit by climate activist Greta Thunberg.

The work was also showcased at the TED2019 conference in Vancouver, Canada; at the World Health Organization conference in Geneva, Switzerland, and at an exhibition in Melbourne, Australia – as well as at a number of other locations around the world. The exhibit is now in Madrid at the UN Climate Summit from 2-13 December 2019.