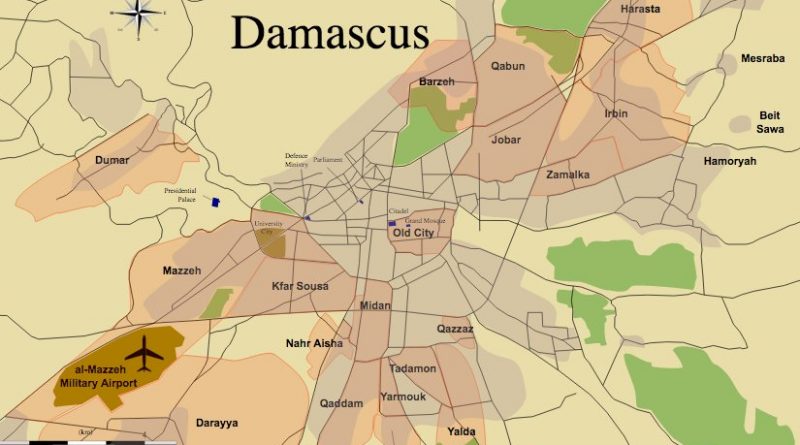 Location of Mezzeh Military Airport in Damascus, Syria, in brown at the bottom left. Map by MrPenguin20, Wikipedia Commons.

Israel launched a missile attack on the al-Mezzeh military airport west of Damascus, according to Syrian state media.

The Syrian government said the attack was a terrorist act, and vowed “repercussions.”

“Several missiles were fired from the Lake Tiberias area and landed in the surroundings of al-Mezzeh airport at 12:25 after midnight, causing a fire to erupt,” according to SANA, quoting a Syrian military official.

There was no information regarding casualties.

Syria’s Foreign and Expatriates Ministry has sent complaint to the United Nations regarding the attacks, in which the government claims that the attacks on Syrian territory “is part of a long series of Israeli aggressions against the sovereignty and independence of Syria and the sanctity of its territory,” SANA reported.

The same article claimed that the attacks would not have happened without the direct support of the outgoing US administration and the French and British governments.

Correction: The article and headline incorrectly stated that the attacks were the results of Israeli jets, as per earlier reports.