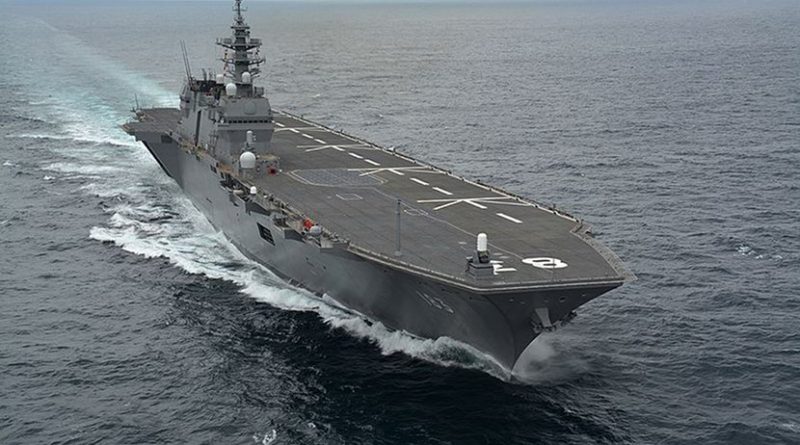 (FPRI) — With remarkably little fuss, the Japanese Diet approved the latest iteration of Japan’s National Defense Program Guidelines in December 2018. The new guidelines pave the way for the conversion of the Japan Maritime Self-Defense Force’s two largest warships, the Izumo and Kaga, into aircraft carriers.[1] Though officially classified as helicopter destroyers, the two ships already resemble light aircraft carriers and embark several anti-submarine warfare helicopters. What will ultimately complete their transformation into true aircraft carriers is Japan’s expected acquisition of up to 40 American F-35B short takeoff and vertical landing (STVOL) fighters, as the Yomiuri Shimbun reported in early 2018.

Practically, the conversion of the two ships will probably entail fitting them with heat-resistant flight decks, reorganizing their below-deck spaces to make room for new fuel and munition stores, and perhaps installing a “ski-ramp” to facilitate aircraft takeoffs. With some foresight (or perhaps forethought), the two ships were launched in 2013 and 2015 with hangar elevators big enough to accommodate F-35B fighters. Indeed, speculation that the ships would eventually carry fighter jets has swirled in Japanese media since 2017.[2] Once the ship conversions and fighter acquisitions are complete, it will mark the first time that Japan operates aircraft carriers since World War II, a time when the Japanese Imperial Navy pioneered the use of naval aviation.

While Japan has grappled with long-running territorial disputes with Russia and South Korea, it was China’s “unilateral, coercive attempts to alter the status quo” that spurred Japan to action. China’s nearly continuous air and sea provocations around the disputed Senkaku Islands (Diaoyu in China), together with the general “lack of transparency surrounding [China’s] defense policy and military power,” have deeply concerned Japan, the recent handshake between Chinese President Xi Jinping and Japanese Prime Minister Shinzō Abe notwithstanding.[3] As a result, Japan began to take precautionary measures to improve its security about a half decade ago. Those measures now include reviving its fixed-wing naval aviation capability.

However, even after their conversions are complete, Japan’s two aircraft carriers will represent only a modest improvement in its sea power. Neither ship will carry a large complement of aircraft. Comparing their size and displacement to those of the U.S. Navy’s bigger America-class amphibious assault ships, which were designed to carry 23 F-35B fighters, and the Royal Navy’s even bigger Queen Elizabeth-class aircraft carriers, which can embark over 24 F-35B fighters, Japan’s Izumo-class aircraft carriers will most likely field about a dozen of the fighter jets apiece.

Such small aircraft carriers naturally raise questions about their value, considering the high-intensity warfare scenarios in which they may need to operate. After all, the opportunity cost of operating aircraft carriers is high. They consume resources that could be used to bolster surface, submarine, or land-based naval air capabilities. In this case, Japanese leaders may have felt they had little choice. The threat from China had grown so large that it was becoming questionable whether Japan could credibly deter, let alone defend against, Chinese actions in the East China Sea.

Although Japan could use its naval aviation to boost its northern defenses, the Japan Air Self-Defense Force already operates F-15J fighter squadrons from nearby Chitose Air Base on Hokkaido. It is in the south where the Izumo and Kaga will be more valuable. Lying about 400 km from the nearest Japanese air base on Okinawa, the Senkaku Islands are particularly vulnerable. With Chinese ships constantly testing the maritime boundaries around the islands, Japan is understandably worried that China could suddenly seize them.

History offers an example of just such an incident: Argentina’s swift seizure of the Falkland Islands in 1982. In the ensuing conflict, carrier-based naval aviation played a crucial part in Britain’s military campaign to retake the islands. The Royal Navy used Sea Harrier vertical/short takeoff and landing (V/STOL) attack aircraft aboard its two aircraft carriers, the Invincible and Hermes, to provide air defense and close air support. Japanese forces will likely use the F-35B fighters aboard the Izumo and Kaga in similar roles.

Supporting that contention is the fact that Japan is unlikely to retrofit its Izumo-class aircraft carriers with catapult systems due to their considerable expense and below-deck space requirements. Without catapults, the Izumo and Kaga will be unable to launch dedicated attack aircraft with heavy ordinance loads. Little surprise then that Japan’s F-35B fighters will have payloads that are roughly 25 percent smaller than those carried by the U.S. Navy’s F-35C or F/A-18C/D fighters.

A bigger question, however, is whether Japan’s relatively small number of carrier-based fighters can adequately protect Japanese forces operating near the Senkaku Islands, which are well within the ranges of multiple squadrons of Chinese J-10 and J-11 land-based fighters (and perhaps fifth-generation J-20 stealth fighters one day). Plus, the Chinese navy could contribute dozens of J-15 fighters from two (and eventually three) aircraft carriers. And, of course, Japan’s aircraft carriers could themselves come under attack from Chinese anti-ship missiles.

To be sure, Tokyo is well aware of the dangers facing its forces. It has begun to prepare them to fight more efficiently and effectively. Within the last year, it decided to acquire nine more E-2D airborne early warning and control aircraft to better coordinate its carrier- and land-based fighters and four KC-46A aerial refueling tankers to extend their ranges.[4] Japan has also put satellites into orbit to provide more persistent surveillance over the region and adopted new technologies, such as lithium-ion batteries aboard its Sōryū-class submarines (reducing their acoustic signature while giving them longer underwater range), to give its forces an edge.

During the Cold War, the principal role of Japan’s maritime forces, apart from national defense, was to help the U.S. Navy protect the sea lanes of communication across the Pacific Ocean from Soviet submarines. Hence, Japan maintained a large number of destroyers and frigates equipped for anti-submarine warfare. Until their forthcoming conversions were revealed, one could have argued that Japan’s Izumo-class helicopter destroyers still fit into that defensive mold.

However, the steps that Japan has taken to strengthen its ability to defend its distant islands are gradually changing the character of Japan’s maritime forces. The revival of Japanese carrier-based air power is probably the most conspicuous sign of that change. In the years ahead, Japan may seek to create a somewhat more balanced fleet, one with a greater range of both defensive and offensive capabilities. At this point, it is hard to say whether Japan’s views on the use of force will change, too. But what is easier to envisage is that, if China continues its maritime pressure in the East China Sea, the Izumo and Kaga are unlikely to be the last aircraft carriers that Japan builds.

*About the author:Felix K. Chang is a senior fellow at the Foreign Policy Research Institute. He is also the Chief Strategy Officer of DecisionQ, a predictive analytics company in the national security and healthcare industries.