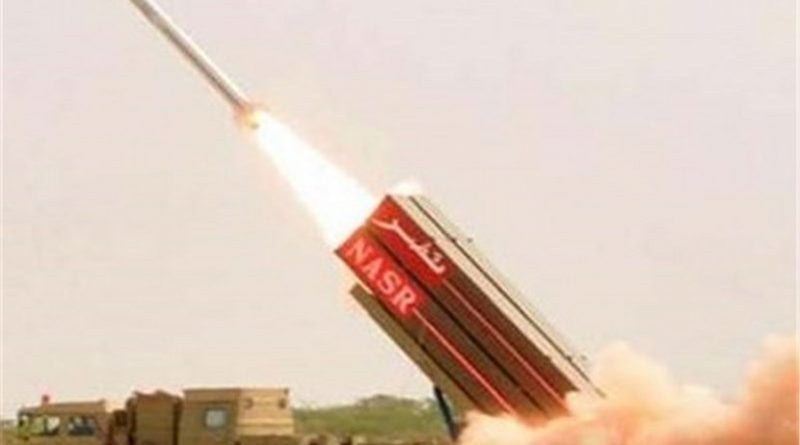 Quad salvo means that the four missiles were fired together from AR1A/A100-E Multiple Launch Rocket System (MLRS) to enhance the operational efficiency of Army Strategic force Command. While single shots means one missile was fired from the vehicle. The aimed of letter tests were for testing inflight maneuverability, including the end flight maneuverability.

Nasr has shoot and scoot attributes which mean that the system has a capability of firing and moving away quickly to avoid counter targeting which would be contributing to the weapon’s survivability. The speed and low apogee of the Hatf-IX missile would make it difficult to intercept by all the Indian existing Ballistic Missile Defence system and could defeat S-400 air defence system which is in process.

In South Asia, security competition between India and Pakistan has been characterised by an action-reaction spiral. Pakistan took the path of nuclear weapons development in order to create balance against militarily superior India. In 2004, India adopted aggressive military doctrine, Pakistan rationally responded by developing Short Range Ballistic Missile Nasr which further strengthen the existing deterrence equation of the region. As Pakistan is not able economically to compete India conventionally, so it always took necessitating reactionary steps to maintain deterrence stability of South Asia.

The purpose of the development of Nasr is defensive because Pakistan would use it to secure its border from Indian conventional aggression. Pakistan Short Range Ballistic Missile Nasr has been criticized by international community that it would increase arms race in South Asia. But Pakistan developed Nasr to overcome the growing threats from the Indian offensive military doctrine.

Cold Start Doctrine (CSD) forces Pakistan to increase its dependence on nuclear arsenals. General Bipin acknowledged CSD in 2017, was followed by Pakistan’s Nasr test by improving its range from 60 to 70 km which puts cold water on Cold Start. Before official acknowledgement of CSD, Pakistan did not conduct any training tests of Nasr. Pakistan inducted the Nasr missile in its strategic arsenal in 2017 and its first training launch was held in July 2017 after the official acknowledgment of CSD from Indian side, shows that Pakistan developed Nasr only to deter India from initiating a conventional assault against Pakistan.

Pakistan does not want to indulge in an arms race rather react to those Indian developments which are threatening its sovereignty. This weapon system has augmented Full Spectrum Deterrence in line with Credible Minimum Deterrence, which means that Pakistan would deter conventional forces (India) by employing nuclear deterrence. Pakistan adopted assertive command and control system on Nasr which means it is centrally controlled which minimize the chances of accidental or unauthorized use.

The latest series of Nasr training tests were response to General Bipin 10th January 2019, statement, that the military is launching war games next month to test ‘structures geared towards sudden and swift offensives into enemy territory by Integrated Battle Groups (IBGs). These new structures will be “validated” in military exercises on the ground in May, 2019.

As IBGs are the center of Indian offensive military doctrine, which involves initiating rapid military offence from multiple fronts by exploiting the element of surprise and leaving Pakistan with neither the time to respond nor the defensive resources to stop those multiple attacks. Nasr tests are in response to this Indian military announcement as Pakistan solely developed Short Range Ballistic Missile Nasr to deter India from initiating conventional conflict. The recent Nasr tests have frightened Indian commanders because of its capability to defeat all Indian existing Ballistic Missile Defence systems and S-400 air defence system. Hence, deterrence is often in the minds of adversary. As long as Indian leaders continue to be deterred by Nasr, it will continue to be effective.