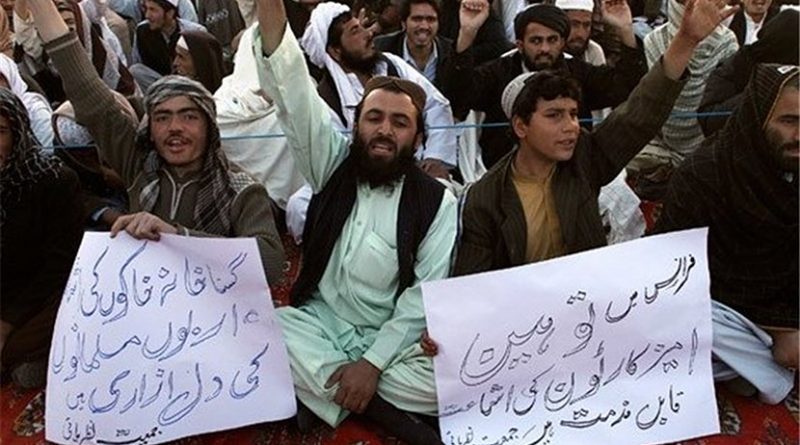 According to the European Court of Human Rights, the Prophet Mohammed may not be called a paedophile. This kind of statement also risks a fine in Switzerland, but some say the article behind it is outdated.

When the Christian Asia Bibi became the first woman to be sentenced to death for blasphemy in Pakistan, the country’s blasphemy laws became the focus of international attention. Although she was recently acquitted, critics said the laws were being used to repress Christian minorities or to get rid of undesirables. Pakistani Islamists in turn argued that it was the duty of every Muslim to kill blasphemers.

Blasphemy is also an offence in Switzerland. Offenders may not be at risk of execution, like in Pakistan, but they could still face a fine.

Article 261 of the Swiss Criminal Code says that “Any person who publicly and maliciously insults or mocks the religious convictions of others, and in particularly their belief in God, or maliciously desecrates objects of religious veneration… is liable to a monetary penalty.”

In Switzerland, this article does not seek to protect religious beliefs or God from insults, but focuses on protecting other people’s feelings. “This helps to maintain religious peace,” said Martino Mona, professor of criminal law and the philosophy of law at the University of Bern.

Switzerland has a long tradition of religious wars and conflicts, which is why the blasphemy ban was needed, says Mona.

“Countries that have a stronger tradition of religious tolerance and diversity…don’t typically have such bans,” she explains.

Across Europe, Germany, Italy, Spain, Greece, Austria, Poland and Russia make blasphemy an offence. But it is not outlawed in France, Great Britain and the Netherlands.

Over the last few decades, migrants have brought other religions to Switzerland, including Islam (5.1% of the present population), Hinduism (0.6%) and Buddhism (0.5%). Maintaining religious peace has therefore become more relevant.

“Switzerland would thus be demonstrating a clear commitment to the right to freedom of expression and would also be helping to stop countries such as Pakistan, Saudi Arabia, Iran and Russia from providing justifications for their laws that are hostile to freedom,” the group says in a statement on its website.

Mona is also of the option that the Swiss article is no longer in keeping with the times and should be abolished.

“Abuse and mockery are in my opinion not punishable,” he says. Opinions, he adds, should only be banned when they directly invoke hatred and violence.

In France, blasphemy is not an offence, but in Switzerland, the cartoonists at the French satirical magazine Charlie Hebdo – targets of a 2015 terror attack – would have been at risk of a fine for mocking the Prophet Mohammed.

Would a fine, with its symbolic value, have hindered the attack by Islamist gunmen on journalists at the magazine?

“No, just the opposite,” Mona argues. “Blasphemy bans actually do more to support religious fanatics in their beliefs that they should get rid of blasphemers.”

It would be naïve to believe that these fanatics would be would be content with, in their view, mere symbolic fines, he adds.

“Attacks have even prompted several countries to get rid of their existing bans or to strengthen the existing admissibility of blasphemy,” Mona says.

Defamation of religion not protected by freedom of expression

But the European Court of Human Rights has lent its support to blasphemy bans. According to an  October 2018 judgement, defamatory criticism of religion is not protected by freedom of expression.

An Austrian woman was fined for remarks made during a public seminar, when she questioned whether the Prophet Mohammed was a role model for today’s Muslims and said that she thought his marriage to the six-year-old Aisha was an example of paedophilia. She expressed an opinion that Mohammed had lived a life that did not correspond to modern social standards.

The Austrian woman’s argument that the comments had to be tolerated as part of a lively discussion was rejected by the court. It is not permitted “to pack incriminating statements into the wrapping of an otherwise acceptable expression of opinion” and then invoke freedom of expression, it said.

Mohammed is not allowed to be called a paedophile

Statements based on untrue facts do not enjoy the protection of freedom of expression, the court continued. It considered the statement that the Prophet Mohammed was a paedophile to be untrue. Paedophilia is a general sexual preference. Without historical context, the outcome was a value judgement without sufficient factual basis, the court argued.

Mona is sceptical about this kind of conviction. “Criminal law should not be used to protect religious feelings. In my opinion, people have the right to talk nonsense and say offensive things, as long as they don’t stop others from saying what they think.”

Blasphemy bans are used in some countries as a tool for strengthening the state religion. Switzerland is not a neutral country in terms of religion. The Swiss Constitution starts with the preamble: “In the name of Almighty God!” This refers to the Christian God.

The Protestant, Roman Catholic and Christian Catholic (Old Catholic) churches are the recognised national churches. As such, the cantons make instruments of public law available to the churches, such as the right of taxation. Many cantons also publicly recognise Jewish communities, but recognising Muslim communities remains controversial.swiss

There is a separation of church and state in the French-speaking cantons of Geneva and Neuchâtel, so there are no recognised churches as in the German and Italian-speaking parts of the country. In Geneva, the population voted on February 10 to revise its law on the principle of secularism in the canton. The law was controversial because it bans public officials, as well as politicians and teachers, from wearing symbols of religion such as the veil.

Home » Should Switzerland End Its Ban On Blasphemy?

2 thoughts on “Should Switzerland End Its Ban On Blasphemy?”