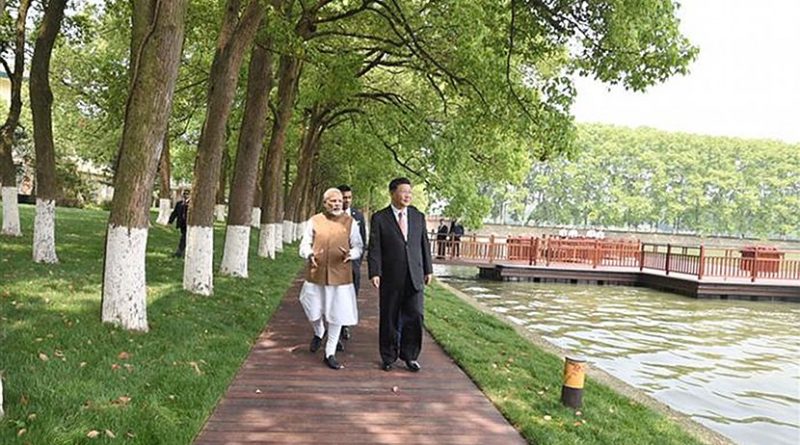 China in the wake of the Wuhan Summit following India’s determined postures in the Dokalam Stand-off in face of China’s provocative road-building in Dokalam, may have defused further escalation only to the extent of averting a potential ‘Hot War’ but the Cold War continues to prevail all across the wide spectrum of China-India relations.

China in the wake of the Wuhan Summit has not offered any dramatic gestures to win over and work towards removal of India’s decades of distrust of China’s intentions and actions which has dominated China- India relations ever since China’s military Occupation of Tibet, through the 1962 War and  decades of congealed lines of massed armed confrontation between the Indian Army and Chinese Army on the icy heights of the Himalayas stretching from Ladakh to Arunachal Pradesh.

Did the Wuhan Summit mark a Game-changing moment in China-India relations or was it a more tactical political expedient? Has the Wuhan Summit led to any de-escalation in the armed confrontation of troops of both nations along the Himalayan Frontiers? Has China even remotely signalled the bare minimum in terms of re-setting China’s policies in South Asia, particularly in relation to Pakistan?

Brief answers to the above questions before detailed analysis suggest that the Wuhan Summit has not been a ‘Game-Changer Moment’ in the adversarial relations between China and India. It was a mere political expedient. In the wake of the Wuhan Summit no visible reductions have taken place in terms of troops levels of the confronting Chinese and Indian troop levels on the Himalayan frontlines. China has made no significant movement in resetting its South Asian policies in terms of ‘balanced relations’  with India and Pakistan.

The more substantial answers to the above questions can be found only by referring to the geopolitical situation hovering over both the countries in the middle of this decade in the run-up to the Dokalam Standoff and the Wuhan Summit. Thereafter, a brief examination of China’s decidedly and pro-Pakistan actions having serious implications for India’s security need to be examined.

But before that a few words about the Wuhan Summit would be in order. The Wuhan Summit was an ‘Informal Summit’ as both China and India termed it and this implied that there was no structured agenda or as some quoted officially claimed by both sides having no scripted outcome. Obviously, China for major reasons and India for lesser reasons opted for a route of ‘managing the contradictions’ hat bedevilled China-India relations rather than any long range visionary ‘Game Changing Dramatic Turnaround’. Of course this was necessitated by the geopolitical dynamics in motion in the middle of the current decade.

Geopolitically, the overall global environment was obviously not in favour of China chiefly because of China’s aggressive brinkmanship in the South China Sea and the East China Sea. This had polarised the Asia Pacific against China’s aggressive instincts in blatant disregard of International norms, conventions and UN Conventions. China was economically slowing down while its defence budgets were escalating. Then with advent of US President Trump in 2016 in Washington all indications pointed towards hardening of US policies towards China. Realistically, at this time China was besieged from both within and without. In 2019 one can see the evidence in the ongoing US-China Trade Wars.

In contrast, India geopolitically could be stated to be on the upswing with being counted in capitals of the world especially those of Major Powers as an Emerging Power with strong potential to emerge as an existential counterweight to China’s revisionist power impulses. Its minimal credible nuclear deterrence was in place and moving towards ICBMs capabilities and nuclear submarines. Economically, the economy was registering good rates of growth. In relation to China, while power asymmetries did exist but India was reducing the differentials.

The most notable tectonic geopolitical shift in India’s favour has been strengthening of the US-India Strategic Partnership evolving since the turn of the Millennium. Imperceptibly, India has tilted towards the United States with both nations having strategic convergences centred on China’s not so peaceful rise. The United States seems committed to building up India’s power potential impelled by its perspectives of India as an existential counterweight to China.

Many in the strategic community would like us to believe that China’s military power is approaching Superpower equivalents. It may be so academically but as argued in my Book ’China-India Military Confrontation:21st Century Perspectives ( 2015) that China can never reach the status of a Superpower because of its equally stupendous national vulnerabilities and with its power-projection limited to Western Pacific, notwithstanding its Nuclear Triad.

In 2017 the year preceding to the run-up to the Wuhan Summit let us ponder on China’s two major disruptive specific events specific to South Asia and which shook India’s confidence in China’s so-called peaceful rise which rhetoric does not befool all who scrutinise China’s intentions. The first one was China launching the $460 billion China Pakistan Economic Corridor (CPEC) and the second event was the Dokalam Military Standoff foisted in the Sikkim Region. China’s intentions in both these cases seriously impinged on India’s sovereignty and national security interests.

China’s CPEC project violated India’s sovereignty as in its upper reaches the CPEC traversed the region of Pakistan Occupied Kashmir which is legally part of India . The CPEC in military terms permits with Pakistan’s acquiescence significantly allows China to turn the flanks of India’s military defensive deployments in Ladakh and Jammu and Kashmir. It would also permit China to reinforce Pakistan militarily in the event of Pakistan getting into a Hot War with India.

China forced the Dokalam Military Standoff on India and avoidably so. Retrospectively, one could even suggest that China’s aggressive actions on Dkalam were intended to test India’s military resolve to safeguard its national security interests. Sequentially, Dokalam coming after China’s military provocations in Ladakh by intrusions/transgressions into Indian territory in the previous two years did not speak well of China’s earnestness in improving relations with India.

Dokalam would not have discredited China in Indian public opinion if China had not been oblivious to the strategic reality that India of 2014-18 strategically and militarily was not the India of 1962. To that extent China should have been surprised by PM Modi’s determination and tenacity and those of the Indian Army as India faced China’s military provocations for 73 days without being cowed down.

China had to devise the Wuhan Informal Summit as a face-saver as in the wake of the Dokalam Military Standoff, India had given enough indications that PM Modi would not attend the Beijing Summit in May 2018.

China must recognise that if it sincere and genuine in fostering the Wuhan Spirit then China must learn to walk the talk to convince India that it is determined to recast China’s Pakistan-centric policy formulations in South Asia.

China’s shielding in the United Nations Pakistan Army’s state sponsored terrorism in India through Jihadi terrorist groups like JeM Chief Masood Azhar is abhorrent in terms of respect for civilised norms. More significantly, it is decidedly an Anti-Indian hostile step in intent and action. More so that China’s action goes against the majority view of all the other UN Security Council Permanent Members in supporting India’s stand.

China is also for years stoutly opposing India’s membership of the Nuclear Suppliers Group. In essence, China’s action here is aimed at dwarfing India’s ascendancy on the global power trajectory. Perceptionaly and otherwise this Chinese adamancy only sharpens the adversarial contours that presently defines China-India relations but is also counter-productive for trustworthy China-India relations.

Concluding, the foregoing analysis shorn of diplomatic niceties suggests that China has only indulged in rhetorical flourishes in extolling the so-called Wuhan Spirit. China tried for decades to restrict India strategically within South Asian confines. China has failed as India breached this box-in by China and has extended its wings all the way to the Western Pacific. China needs to recognise that it cannot be trusted by India and within India until it stops viewing India through the Pakistani prism. In the ongoing power games that China is playing in South Asia, it is the China-Pakistan Axis that will be the ultimate losers in the long run.