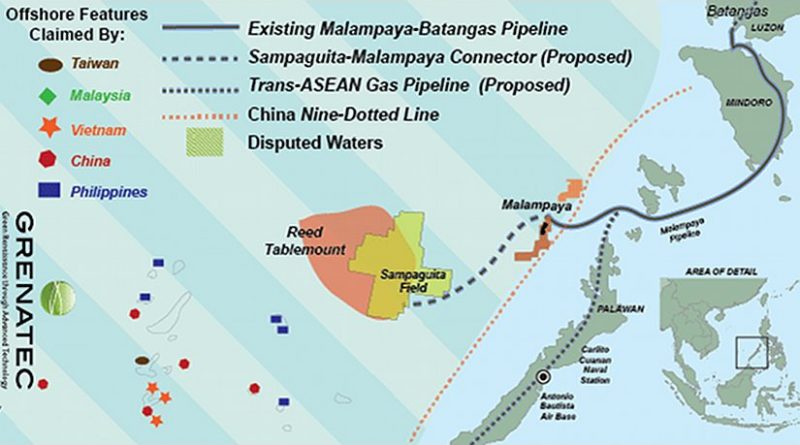 Reed Bank off Philippine Palawan could become the South China Sea’s second Joint Development Area (JDA). The first would be off Triton Island in the Paracels.

The Sampaguita Field within Reed Bank could be developed as a JDA connected to southern Luzon via an extension of the existing Malampaya pipeline.

A Chinese-Philippine JDA in the Spratly Islands would reassure Southeast Asia’s smaller countries about China’s intentions.

For years, talks have been going on between Philippine oil and gas explorer Philex Petroleum Corp., and China National Offshore Oil Company (CNOOC).

CNOOC’s been cool, claiming such cooperation acknowledges Philippine jurisdiction. A JDA skirts this problem. Under a JDA, two countries agree to postpone resolution of jurisdiction over a disputed area while they cooperate to develop the resources within it.

An agreement between the two would bind China and the Philippines more closely together, and benefit both sides. This would occur through a combination of carrots and sticks.

The carrot for China would be increased political legitimacy in the Spratlys. The stick for China would be the Philippines’ ability to provide greater access to its strategic military bases to the US Air Force, Army and Navy in the absence of a more cooperative relationship with China.

For the Philippines, the carrot would come through gaining a deep-pocketed investor in the form of CNOOC that can help bring to market new domestic gas supplies via the Malampaya pipeline, now running dry.

The stick for the Philippines would be the possibility China progressively takes over the Spratly Islands through incremental territorial seizures that meet no resistance from an obsequious Association of Southeast Asian Nations (ASEAN) or a fence-sitting America.

At present, Philippine-Chinese diplomacy regarding Reed Bank is suspended pending an anticipated May ruling by a UN Tribunal in the Hague on China’s territorial claims to virtually all the South China Sea.

Another distraction is the Philippines’ May 9 presidential election.

Look for movement after those two events occur. Should China reject the ruling or authority of the arbitration court, the Philippines’ next president can expand access to Philippine bases by US military forces.

Two Philippine military bases are ideal for this. They are the Carlito Cuanan Naval Station and the Antonio Bautista Air Base. Both are located on the Philippine island of Palawan. Both lie much closer to Reed Bank than any of China’s militarized atolls such as Fiery Cross.

Both the Carlito Cuanan and Antonio Bautista military bases can provide valuable logistics for US ‘freedom of navigation’ patrols in the Spratlys accompanied by the Philippine Navy and Air Force.

Worse, China’s credibility and goodwill among her neighbors has been significanty dented by petulant Mao-era justifications of its military building in the South China Sea. These have included non-sequiturs such as labelling critics ‘warmongers.’

Perhaps the biggest blowback from China’s territorial aggressiveness in the South China Sea may be mistrust of funding from China’s newly-created Asian Infrastructure Investment Bank.

A legitimate worry is that Chinese-funded roadways, power lines, pipelines or airports built with AIIB loans could be claimed in the future by China ‘indisputable Chinese territory.’

Confidence between China and her neighbors can be raised through agreeing to JDAs in contentious areas of the South China Sea like the Paracels and Spratlys.

These JDAs can then be linked into a larger Asian energy infrastructure. That infrastructure would deepen economic cooperation, make everybody richer and reduces the unilateral benefit of war.

The timing is right. Asia needs, literally, trillions of dollars of new energy infrastructure of every kind to deliver oil, gas and electricity from production centers to consumption centers. This includes everything from solar and wind energy from remote northern and western China, to hydro power to oil and gas in offshore areas.