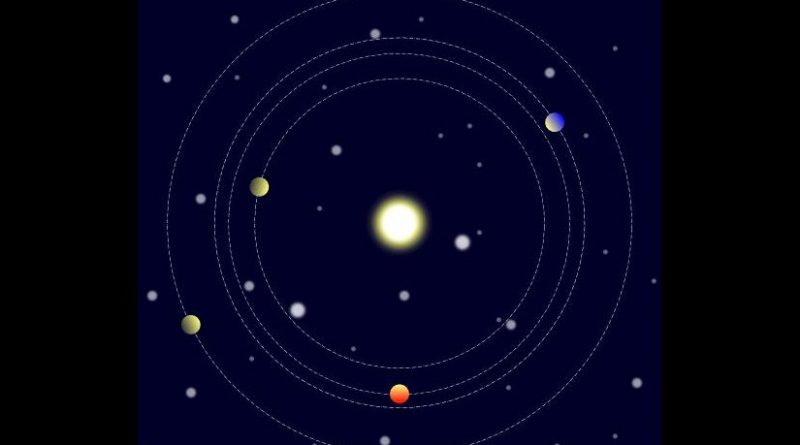 This animation illustrates the Kepler-223 planetary system, which has long-term stability because its four planets interact gravitationally to keep the beat of a carefully choreographed dance as they orbit their host star. For example, each time the innermost planet (Kepler-223b) orbits the system's star 3 times, the second-closest planet (Kepler-223c) orbits precisely 4 times, and these two planets return to the same positions relative to each other and their host star. The orbital periods of the four planets of the Kepler-233 system have ratios of exactly 3 to 4, 4 to 6, and 6 to 8. The ratio of these orbits is so precise that they provide a stabilizing influence for the planetary system.

The search for planets orbiting other stars in our galaxy has revealed an extraordinary family of planets whose orbits are so carefully timed that they provide long-term stability for their planetary system. A paper describing the formation of this planetary system by a research team that includes a Penn State University astrophysicist will be published in the journal Nature on May 11, 2016.

“The Kepler-223 planetary system has unusually long-term stability because its four planets interact gravitationally to keep the beat of a carefully choreographed dance as they orbit their host star,” said Eric Ford, a professor of astronomy and astrophysics at Penn State and a member of the research team. Each time the innermost planet (Kepler-223b) orbits the system’s star 3 times, the second-closest planet (Kepler-223c) orbits precisely 4 times. Thus, these two planets return to the same positions relative to each other and their host star.

Throughout the Kepler-233 system, the dance is much more elaborate. “The orbital periods of the four planets of the Kepler-233 system have ratios of exactly 3 to 4, 4 to 6, and 6 to 8,” Ford said. The ratio of the orbits of the four planets is so precise that they provide a stabilizing influence for the planetary system. “The precisely timed orbits of these planets places strong constraints on how they could have formed,” Ford said.

“Our analysis shows that a slow, smooth, migration of the system during its formation and evolution would be able to place these planets into the delicately balanced configuration that we observe today.” An example closer to home on Earth is the synchronization that a side-by-side group of undisturbed mechanical metronomes achieve over time, even though they each begin ticking at a different frequency. “The Kepler-223 system is one of the best examples of a system that provides such strong clues about how its planets could have formed,” Ford said.

Studying systems like Kepler-223 is important because they provide a rare opportunity to test models of planet formation. Ford said that the research team’s results have implications for many other planetary systems. The team performed numerical simulations of planetary migration that generated the Kepler-223 system’s current architecture, which is similar to the migration suspected for planets of our outer solar system, Jupiter, Saturn, Uranus, and Neptune. “Kepler found lots of systems with multiple super-Earth and/or sub-Neptune-size planets orbiting close to their host star, but the vast majority of these systems are not in a special resonant configuration like that of Kepler-223, Ford said. “Many of these systems may have formed similarly to Kepler-223, but then later became destabilized, perhaps by a more distant massive planet or perhaps by the cumulative effect of the scattering of many smaller planetesimals left over from the planet-building process.”

The scientists used data from NASA’s Kepler telescope to measure how much starlight each of the four planets block as they pass in front of their star, and to detect slight changes in each of the planets’ orbits. Combining observations from Kepler and the Keck Observatory, the team was able to infer the planets’ sizes and masses.

Ford’s contributions to the research included improving the computational efficiency and quality of the statistical analysis, which enabled the team to provide statistically rigorous constraints on the planets’ masses and orbits. “Often, advanced statistical and dynamical modeling is required to account for the rich array of astrophysical effects detected by the Kepler observatory. For systems with strongly interacting planets, like Kepler-223, such analyses require a combination of efficient statistical algorithms and significant computing resources,” Ford said.

“Several faculty, postdoctoral researchers, and students at Penn State’s Center for Exoplanets and Habitable Worlds are actively engaged in performing detailed analyses of the rich treasure trove of data from Kepler’s most exciting discoveries, such as Kepler-223,” Ford said. At Penn State, researchers associated with the Center for Astrostatistics and the Institute for Cyberscience are leaders in developing and applying advanced statistical and computational methods that are important for this and other data resulting from science research. Penn State’s new interdisciplinary Statistical Modeling Data Science program is beginning to train undergraduates to apply the theoretical machinery of modern statistics to the search for answers to questions involving very complex or massive amounts of data — known as “big data.”