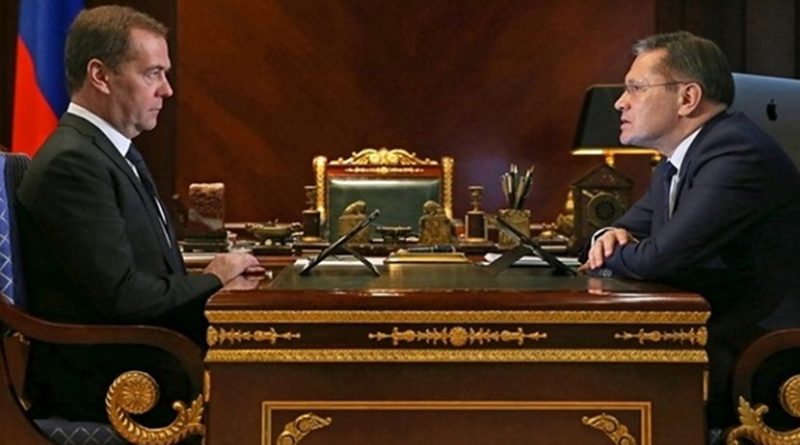 Medvedev and Likhachov at their meeting on 6 May. Photo Credit: Russian PM’s Office

Rosatom expects to double revenue from its overseas business, from USD6.6 billion last year to USD15 billion by 2024, its director general, Alexey Likhachov, has told Russian Prime Minister Dmitry Medvedev. In their meeting, on 6 May, Likhachov said foreign projects were the “key theme” of the state nuclear corporation’s future growth.

According to a transcript of their conversation published by Medvedev’s office, Likhachov also said the “open part” of Rosatom’s revenue had for the first time exceeded RUB1 trillion and that investment was also at a record level of one-quarter of a trillion rubles. The share of the state budget in the corporation’s finances was gradually decreasing and being replaced by its own funds, he added.

Rosatom’s supervisory board met on 22 April and concluded that its strategic targets to date had been met, including the investment programme of nuclear power plant operator subsidiary Rosenergoatom for the construction of units both in Russia and abroad, he said. The corporation’s portfolio of overseas orders stretches 10 years ahead, he added.

It is also making progress with its new businesses. “It is important to emphasise here that more than 50% of the revenue from new businesses is provided by enterprises of the nuclear weapons complex, defence companies. This task was set by the President and the government,” he said.

Rosatom’s contribution to social funds, local budgets and the federal budget is growing and has reached a quarter of a trillion rubles, he said. Wages at the corporation have increased by more than 7% annually, “outpacing” the national growth rate, and there has been an annual increase of more than 9% in labour productivity.

Rosatom attaches “great importance” to training, he said, having created more than 11,000 high-tech jobs over the past five years. It aims to reach 25,000 jobs by 2024, he added.

Highlights of last year include the commissioning of Rostov unit 4 and Leningrad II unit 1, he said. In addition, construction of unit 2 at the Novovoronezh II nuclear power plant has been completed, with plans to synchronise it to the network and deliver its first pilot electricity between 9 and 12 May.

The “hit” of the past year was the country’s first floating nuclear power plant, for which it expects to complete the licensing process in July and to tow it to Pevek in August.

Since Atomflot became a subsidiary of Rosatom, its revenue has changed from being half the value of the contribution of state funds to almost RUB7 billion, with federal funding coming to an end in 2020, Likhachov said.

“I would emphasise that, since 2013, we have been spending state funds for Atomflot only on the production of fuel for icebreakers that are under construction,” he added.