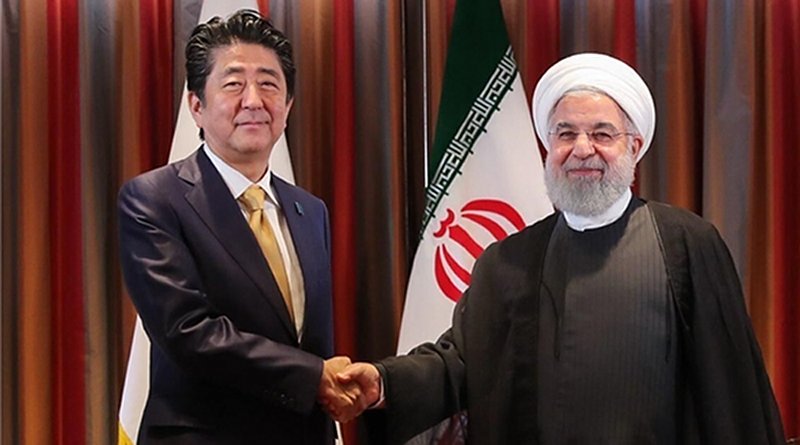 Iran’s President Hassan Rouhani slammed the US sanctions on his nation as an act of terrorism and “root cause of tensions in the region”, and told the visiting Japanese Prime Minister that Iran will continue with modifying its undertakings under the nuclear deal if it remains the only party complying with its terms.

Speaking at a joint press conference with visiting Japanese Prime Minister Abe Shinzo in Tehran on Wednesday, Rouhani noted the age-old ties between the two countries and appreciated the Japanese premier for giving a positive response to his invitation to visit Iran.

He further praised constructive ties and consultations with Japan in the past several years, and stressed that Tehran welcomes cooperation with Japan at all the bilateral, regional and international levels.

“We discussed investment in Iran’s Southern port city of Mahshahr and the port of Makran,” Rouhani said, and added that Japan’s willingness to continue buying crude from Iran ensures stability in growing ties between the two countries.

“We welcome Japan’s interest to continue purchasing Iran’s crude and settle financial ties between the two countries,” he said.

“In addition to bilateral ties, we also discussed regional security and detente,” Rouhani said, and voiced pleasure in the two countries’ interest in regional stability.

The president ensured his state’s policy has been built on peace and security at regional and global stage, but meantime, indicated that Tehran is fully prepared for all scenarios, implying that it would definitely not sit idly if it comes under attack by the US.

“I ensured Mr. Prime Minister we will not initiate any war with any country in the region, but if war is imposed on us, we will give a decisive response,” the Iranian president reiterated.

“Mr Shinzo voiced optimism in the present conditions and said he knows that propsects are bright,” he added.

Rouhani praised Japan’s support for the Joint Comprehensive Plan of Action (JCPOA), and said he has informed the Japanese premier that Iran is resolved to continue the present path of modifying its undertakings under the nuclear deal based on the contents of “Paragraphs 36 and 37” if the merits promised by the signatories to Tehran are not provided.

The president slammed Washington’s sanctions on Tehran and said, “I told Mr. Prime Minister that the sanctions imposed on Iran are a clear instance of economic terrorism.”

“Tensions in the region are rooted in the United States’ economic war against Iran,” Rouhani reiterated.

Yet, he appreciated Japan’s goodwill and care for regional security and stability, and asked for expansion of nuclear cooperation with Tokyo for peaceful purposes.

The Japanese premier appreciated Iran’s warm hospitality during the visit, and said he had wished to visit Tehran all throughout the last three decades after he accompanied his father, the then foreign minister, during a visit to Tehran.

Noting that this is the first official trip to Iran by a Japanese prime minister after 41 years, he expressed strong willingness to expand cooperation with Tehran in various areas, including medical grounds.

The Japanese premier further voiced concern over instability in the region, and said his country is willing to help to deescalate the present tensions.

Shinzo appreciated the religious Fatwa issued by Iran’s Supreme Leader Ayatollah Seyed Ali Khamenei that has placed strong religious ban on the acquisition, production, stockpiling and use of the Weapons of Mass Destruction, and voiced pleasure in Iran’s full compliance with the nuclear deal.

He failed to note the US sanctions and military threat to Iran by the deployment of thousands of troops in and around the Persian Gulf, and asked Iran to help him advance his mediation efforts.

Shinzo, heading a high-ranking politico-economic delegation, arrived in Tehran on Wednesday on a three-day visit to discuss bilateral ties and cooperation. According to Japanese media, mediation between Iran and the US is on his agenda.

The visit comes more than one year after Washington’s abrupt withdrawal from the landmark nuclear deal that led to the lifting of economic sanctions on Iran. Japan is not a member of the deal but has been a supporter.

Before making the trip official, Shinzo and Trump had a phone conversation on Tuesday about the Japaneses prime minister’s trip to Tehran.

The US president’s anti-Tehran top aide, Secretary of State Mike Pompeo, has recently claimed that Washington is ready to engage in talks with the Islamic Republic without preconditions, and his boss has reinstated harsh economic sanctions against Iran to force Tehran back to the table – a desire that has not yet come to reality. Washington has also escalated America’s military presence in the Persian Gulf – recently sending an aircraft carrier group, a squadron of B-52 bombers and additional Patriot air defense systems as a “message” to Iran. Trump claimed that the United States is not seeking armed conflict with Tehran, calling for negotiation with Iran to reach a new deal. The US president also introduced sanctions on third countries that would do business with the Islamic Republic. Dependent on Iranian oil, Japan is one such country.

In May, Iran announced it was suspending some of its commitments under the nuclear deal, setting a 60-day deadline for the five remaining parties to the deal — France, Germany, the UK, China and Russia — to take practical measures towards ensuring Tehran’s interests in the face of the American sanctions.

The Japanese Prime Minister is slated to meet Supreme Leader Ayatollah Seyed Ali Khamenei on Thursday. His trip is the first visit to Iran by an incumbent Japanese premier in 41 years, as Tokyo and Tehran have friendly ties and will mark the 90th anniversary of diplomatic relations this year. Japanese Foreign Minister Taro Kono also held talks with his Iranian counterpart Mohammad Javad Zarif hours before the Shinzo-Rouhani summit.

Once Japan signalled its willingness few weeks ago to do mediation between Iran and the US, Spokesman of Iran’s top security body – the Supreme National Security Council (SNSC) – Keivan Khosravi said last Thursday that Shinzo’s efforts to get the US back to the nuclear agreement and remove Washington’s extraterritorial sanctions are the two principles that can guarantee the success of his upcoming visit to Tehran.

“Iran-Japan relations have always enjoyed a balanced and stable level and progress in political and economic spheres,” Khosravi wrote in a memo to FNA.

“Japan’s approach in area of foreign policy has mainly been based on support for the legal and political norms approved by the international community,” he underlined, adding that Tokyo “has been in most cases immune to the tides and ebbs of extremism and inactivity in its foreign policy”.

“Preserving and enhancing the political and economic position of Japan in the international system, which is an asset of this country interwoven with the identity of its people, are among the principles that the Japanese fiercely adhere and follow up,” he noted.

“The upcoming visit of Abe Shinzo to Tehran is assuredly a significant event in the course of bolstering and expanding bilateral relations between the two countries in different areas,” the senior Iranian security official highlighted.

“Assuredly the highest executive official of this country will seize the opportunity to boost the political credibility of Japan,” Khosravi underscored.

“It is said that Abe Shinzo is visiting Iran as a mediator authorized by the US,” he highlighted, and stressed, “Efforts to return the US to the JCPOA and make up for the damages inflicted on Iran and removing Washington’s extraterritorial sanctions against our country, which are both from the accepted and reiterated principles of the international community, can act as a guarantee for this visit’s success.”