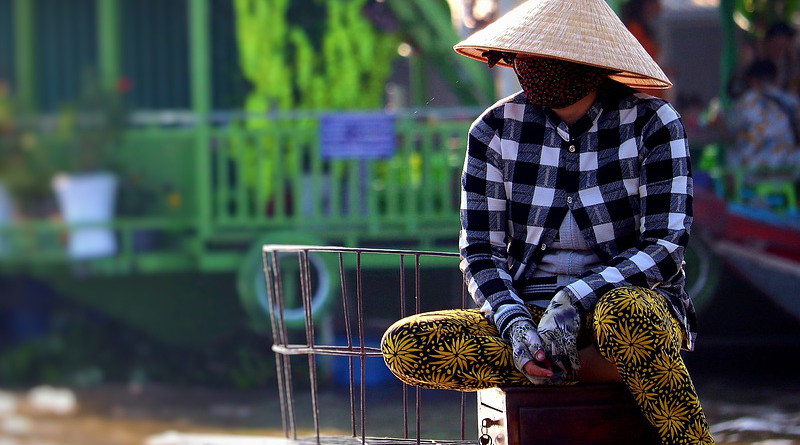 It is no secret that people in major cities are bearing the brunt of COVID-19. This is even more pronounced in the metropolises of the global south, where millions of urban poor engage in precarious informal employment to survive, and live and work in crowded conditions.

In many Asian cities, COVID-19 has exposed deepening inequality and growing impoverishment among the urban poor. Many vulnerable informal workers, often ignored by governments, have scrambled together self-help practices to combat the onslaught of the pandemic.

In Hanoi, Vietnam, and Manila in the Philippines, there are patterns emerging in the strategies street workers are employing to survive, which could help city governments address the needs of the urban poor.

In Manila, partnerships with non-government organisations (NGOs) and local state offices have been playing a critical role in crisis management. A case in point is Metro Manila Vendors’ Alliance’s (MMVA) collaboration with an NGO in delivering fresh fruit and vegetables to customers.

While this partnership only lasted a few weeks, MMVA has sustained the operation by participating in the Market on Wheels project, which is run by the Quezon City government, a component city of Metro Manila. The alliance formed 10 teams with specific schedules to visit different barangays (villages) using jeepneys (mini buses). MMVA vendors who continue earning money share relief with fellow street workers who have been out of work since mid-March.

In Hanoi, many street workers also switched to mobile trading to sustain their livelihoods. Since informal outdoor markets were forced to close, petty traders chose to stroll from alley to alley yelling names of goods they offer to make an income.

Existing informal networks of small-scale farmers, wholesale traders, and vendors have enabled many street workers to generate income, while also ensuring urban consumers have had access to affordable fresh produce.

Besides these informal ties, some generous individuals have also provided poor workers with free rice and food. The long lines of people waiting to receive aid shows how low-level horizontal support and sharing have helped the vulnerable meet their urgent needs.

For other street service providers whose work is deemed non-essential, social media has served as a platform where they can advertise services that they can still undertake and take orders from customers.

Getting online orders using Facebook has also been a key tool for street vendors in Manila. “Under our We Deliver Fresh Fruits and Veggies Project, vendors take online orders from their suki (loyal customers), then they drop off the products at the buyers’ residences”, Flora Assidao-Santos, MMVA coordinator, explained.

Further, in informal markets in Hanoi, buyers are reminded to socially distance by white lines painted on the streets by local authorities. Customers without facemasks are refused service. In Quezon City, street vendors enforce their own spatial distancing measures in their designated market spaces and constantly wash hands with alcohol-based sanitisers to maintain hygiene.

These mutual-aid initiatives highlight the importance of solidarity economy, a development strategy whereby people and NGOs engage in social enterprises to enhance wellbeing, generate incomes, and contribute to local economies.

Research shows that pandemic shutdowns are intensifying joblessness in Vietnam and the Philippines and that informal workers receive inadequate welfare support from governments to balance this loss of work.

While enforcing lockdown is vital to saving lives, it is also important to support practices that enable the poor to earn a living in these tough times, and the acts of self-regulation being taken by street workers can be a good place to start for policymakers. In this regard, city governments can explore several policy options to support a solidarity economy, both during and after the COVID-19 crisis.

Second, a call for strategic NGO-public partnerships as an alternative to private-public partnership – which often excludes civic groups and people’s organisations – in the development process is crucial for strengthening solidarity-based practices.

Third, local governments can collaborate with academics in conducting research on grassroots collective action and how these practices can inform policy-making and urban planning interventions.

As countries around the globe navigate the effects of COVID-19 crisis, the urban poor and their grassroots organisations have demonstrated their resilience. These diverse and mostly informal initiatives are rooted in local socio-cultural values of sharing and cooperation, and they challenge the dominant assumption that all economic transactions must be highly competitive in nature.

City governments need to promote solidarity-based strategies in their post-pandemic recovery plans or see the resourcefulness of their people go to waste.

Source: This piece was first published at Policy Forum, Asia and the Pacific’s platform for public policy analysis and opinion. Read the original here: https://www.policyforum.net/the-role-of-a-solidarity-economy-in-surviving-a-crisis/