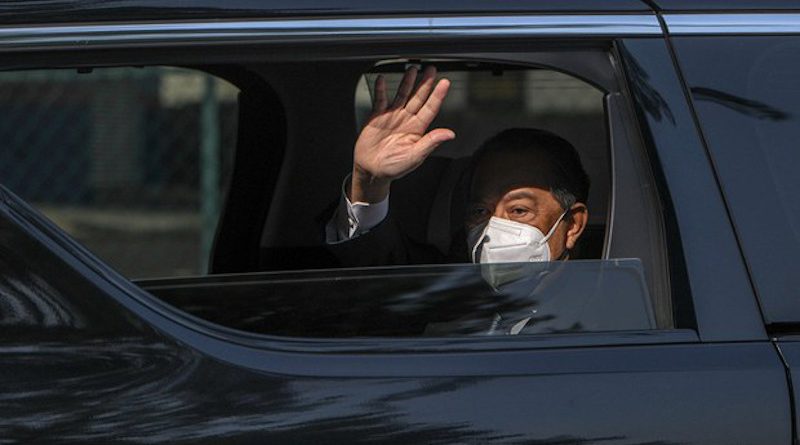 Prime Minister Muhyiddin Yassin’s government on Thursday announced a vote of confidence for Sept. 7, after Malaysia’s king reportedly urged him to hold one next week.

Communications and Multimedia Minister Saifuddin Abdullah announced the date for the first such vote that could seal the fate of Muhyiddin’s unelected 17-month-old government. But the minister did not comment on reports that the monarch had urged a vote for some time during the third week of August.

“For now, that is the date and a notice has been issued by the Dewan Rakyat [lower house] Speaker Azhar Azizan Harun for it to be held on Sept. 7,” Saifuddin told a virtual press conference.

Muhyiddin “is cognizant of the importance of the vote, and he also understands that there are people who want this vote to be held earlier than September. As far as I’m concerned, the official date is still Sept. 7,” the minister said.

When asked whether the cabinet on Wednesday had discussed the possibility of a confidence vote earlier than September, Saifuddin said “there are many possibilities in politics, however the official date is Sept. 7.”

Almost all opposition parties have said Muhyiddin should resign or call an emergency parliamentary session to hold a confidence vote because the king on July 29 had reprimanded the PM’s government for allegedly misleading the legislature.

Muhyiddin’s tenuous grip on power weakened further on Aug. 3 after the United Malays National Organization – the largest party in the ruling coalition – claimed that enough of its lawmakers had withdrawn support to force him from power.

On Wednesday, some local media groups reported that King Al-Sultan Abdullah Ri’ayatuddin Al-Mustafa Billah had that day urged Muhyiddin to hold a confidence vote ahead of the regular parliamentary session, which is set to begin Sept. 6.

Meanwhile, a source in parliament – who spoke on the condition of anonymity due to the sensitivity of the matter – said the palace had sent a letter to the lower house speaker this week asking how many MPs supported Muhyiddin.

The letter came after the PM had told the king last week that he had majority support and would prove it in parliament.

Malaysia’s parliament has 222 seats, two of which are vacant following the deaths of MPs. Muhyiddin needs the support of a simple majority of lawmakers – 112 – to retain power.

Muhyiddin had commanded the support of 114 lawmakers before UMNO said some of its MPs had withdrawn support to him.

UMNO had said 12 of its MPs had pulled support from Muhyiddin, while the king last week told the PM eight had withdrawn their backing. Since then, two additional UMNO lawmakers have withdrawn support for Muhyiddin.

That brings the number of MPs supporting the PM to 104, but only based on public declarations by UMNO lawmakers. The situation could change by the time the confidence vote rolls around.

“Such statements have no effect in constitutional law. The floor of the Dewan Rakyat [House of Representatives] is the proper place to test the confidence,” he told state news agency Bernama.

“You see, even if 30 or 40 people [are] making statements outside the Dewan [house], it amounts to nothing.”

‘Confidence motion for PM is normal’

For his part, Muhyiddin said he was not worried about the confidence vote, Bernama reported.

“The confidence motion for the prime minister is normal in Parliament, but what should be considered is the country’s current situation and problems,” he told reporters while on a visit to Johor state.

“Can the country handle more problems should there be a change [of government] or political chaos? I’m not anticipating that … but it may affect the national recovery plan and other efforts such as the vaccination program.”

The PM was referring to Malaysia being in the throes of a huge rise in COVID-19 infections.

Malaysians meanwhile are fed up with politicians’ maneuverings amid the public health crisis. Many are particularly angry with Muhyiddin’s government for what they say is its mismanagement of the pandemic and lopsided priorities, which include clinging to power.

The Coalition for Clean and Fair Elections (Bersih 2.0), a local grassroots watchdog, foresees only more political shenanigans until the confidence vote next month.

The group said last week that a delay in the vote could lead to parties offering MPs backdoor enticements and concessions for support during the confidence vote.

As a local daily’s headline said – referring to an unnamed opposition member’s comment that a certain coalition was aggressively pursuing lawmakers – “MP shopping spree is on.”

Hadi Azmi in Kuala Lumpur contributed to this report.