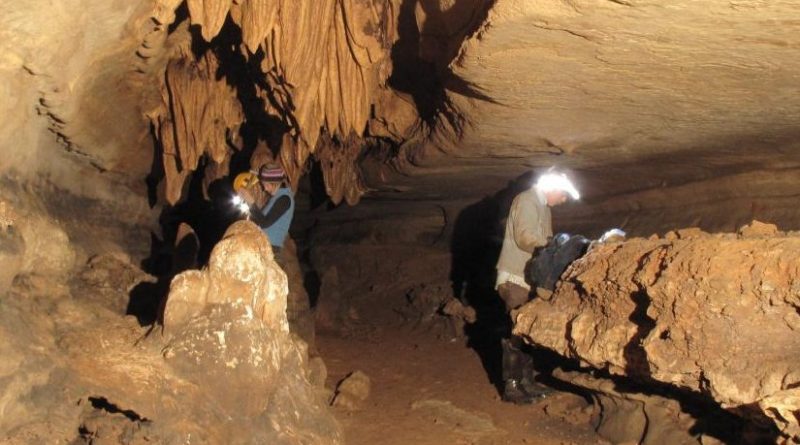 This is a view of the upper passage of Donnehue's Cave showing a ceiling crevice filled with large stalactites, some feeding large stalagmites to the left. A thick flood deposit lies to the right. Credit: Sam Frushour

Stalagmites rising from the floor of a cave in southern Indiana may contain traces of past earthquakes in the region, according to a report published September 13 in the Bulletin of the Seismological Society of America.

The rock formations in Donnehue’s Cave, and others like them in local caves, could help scientists better understand the history of ancient seismic events in the Wabash Valley fault system of the Midwestern United States, said Samuel Panno, a University of Illinois and Illinois State Geological Survey researcher.

However, the stalagmites also contain traces of past climate events such as glacial flooding, and the BSSA study by Panno and his colleagues demonstrates the importance of untangling climate and seismic effects on stalagmite growth.

Stalagmites grow on cave floors from the accumulation of minerals that are precipitated from mineral-laden waters that drip from a cave ceiling. During this process, small to large stalactites that hang like icicles on the cave ceiling grow in the same manner. Earthquakes can leave their mark on stalagmites by shifting the ground in a way that changes the flow of the drip feeding the stalagmite–closing a crack through which the drip flowed, for instance, or knocking down a stalactite that fed a stalagmite.

“Then when you take a stalagmite and slice it down its middle the long way and open it up like a book,” Panno explained, “you can see these shifts in the axis of its growth.”

Using a variety of dating techniques to determine the age of the stalagmite and any surrounding sediments, scientists can then pinpoint the timing of these growth shifts and compare them to the timing of known earthquakes in an area.

Among the four Donnehue stalagmites in the study, the research team found a twin stalagmite pair that had stopped growing around 100,000 years B.P. and then resumed growing at around 6000 years B.P., overlapping in time with a magnitude 7.1 to 7.3 earthquake in the area. Another younger stalagmite began growing around 1800 years B.P.–coinciding with a magnitude 6.2 earthquake–and showed later shifts in its growth axis that overlap with other seismic events in the nearby New Madrid Seismic Zone.

These older earthquakes are known from other studies of soil shaking triggered by earthquakes, called paleoliquefaction, in ancient sediments. But seismic signs contained within stalagmites could potentially extend the evidence for these historic and prehistoric earthquakes, Panno said.

“Most of the evidence for paleoearthquakes comes from liquefaction features that are fairly easy to date,” he noted. “The problem is that you are doing this in sediments that are usually on the order of several hundred to up to 20,000 years old, so to go beyond that, to get older and older earthquake signatures, we decided to look into caves.”

For instance, some of the stalagmites show shifts in growth patterns that coincide with known episodes of flooding from the melting of glacial ice, and others contain thin layers of silt deposited by these floods. “We’re learning that you have to be really careful in where you sample these things, because the caves in southern Indiana, for example, tended to flood during the Pleistocene,” Panno said. “That flooding can move a stalagmite or knock down the stalactite feeding it and change its drip location.”

Panno is working with U.S. Geological Survey seismologist John Tinsley at other caves in the Midwestern U.S., including Indiana’s well-known tourist attraction Marengo Cave, to find other stalagmites, as well as related fallen stalactites that might bear signs of seismic history. They hope future studies will provide more solid evidence of how these formations could store information on the timing, magnitude and origin of past earthquake activity.

Home » Stalagmites In Indiana Cave May Record Past Earthquakes