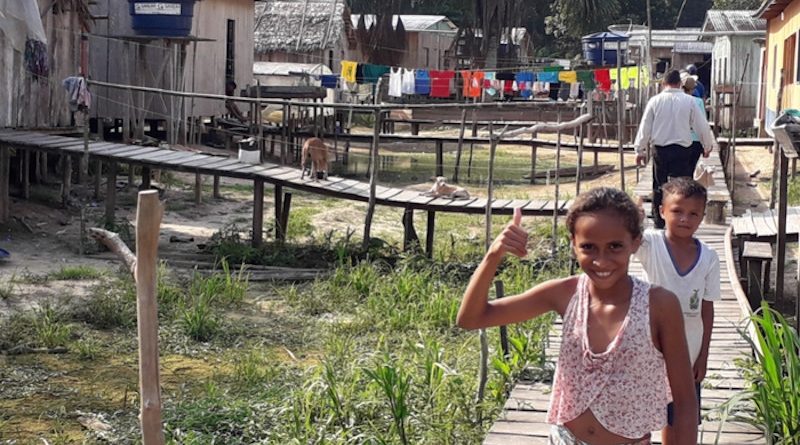 With the support of NGOs, universities and business, the inhabitants of small towns in the Amazon are practicing a self-sustaining circular economy in which waste is converted into inputs for production CREDIT: Michel Xocaira Paes

A novel form of citizenship and community action is on view in a few small towns in the Brazilian Amazon. According to a field survey conducted in Carauari – which is a two-hour flight or a five-day boat trip away from Amazonas state capital Manaus –, the townspeople are highly organized to practice a type of circular economy that converts waste into resources. The experience underway in the area can serve as an example for other Brazilian towns.

An article on the study appears in npj Urban Sustainability, a Nature Portfolio journal published by Springer Nature.

“Carauari lies on the Juruá River, with 28,000 inhabitants – 21,500 in the urban part and 6,500 in adjacent rural and forest areas. The federal government is not very present in the region, but local associations are partnering with non-governmental organizations, universities and companies to run a self-sustaining economy based mainly on fishing of the pirarucu [Arapaima gigas], latex extraction, gathering of açaí berries [Euterpe oleracea], and vegetable oil production. These activities have achieved significant results in terms of conserving local biodiversity and wellbeing. They’re maintained by really good social organization, thanks to the involvement of grassroots networks such as the Carauari Rural Producers Association [ASPROC], the Uacari Sustainable Development Reserve Residents Association [AMARU] and the Middle Juruá Extractive Reserve Mixed Cooperative for Sustainable Development and a Solidary Economy [Codaemj],” said Michel Xocaira Paes, first author of the study. Paes is a researcher at Getúlio Vargas Foundation’s Department of Public Administration and its Center for Infrastructure and Environmental Solutions (CEISA-FGV).

These productive activities are integrated to form a circular economy, Paes explained. Waste from one activity is not a problem that pollutes the environment but converted into resources that fuel another activity. For example, the hulls of the seeds crushed to produce vegetable oil are composted, and fish guts are processed to make turtle feed.

“The communities produce some 100 metric tons per year of processed fish in accordance with the principles of sustainable management. The activity generates some 7,500 kg of waste, which is recycled and blended with residues from other processes, such as cassava flour production, to produce feed for freshwater turtles. This strategy is important to assure the economic feasibility of a community project to breed freshwater turtles, another successful conservation program underway on the Juruá,” Paes said.

“What I saw was an empowered community fully aware that a well-conserved environment is its key resource, and that the living forest is incomparably more valuable than dead timber or deforested land. What this population is doing by converting waste into inputs is transitioning very successfully from a linear degradative economy to a circular regenerative economy.”

Until the new model was implemented, both the pirarucu and the turtle were endangered species in the area. This threat has been averted thanks to community participation. “They’re getting good results by paying very serious attention to environmental conservation, associated with investment by partners such as NGOs, research institutions, universities and companies,” Paes said.

To collect the data used in the study, Paes took a 15-day boat trip along the Juruá, visiting several villages scattered through the area, with 50-100 households each.

The Carauari experience is an example of alternatives that can be used to implement a circular economy in many of Amazon’s small towns. “Co-management initiatives to protect local biodiversity and add value to production chains are ongoing in a number of places,” Paes said. “Integration of co-management and the circular economy is a way to strengthen and expand sustainable urbanization linked to agroindustry based on biodiversity and protection of the forest. Overexploitation of biodiversity products can be avoided by respecting very simple ecological principles, such as harvest and fish quotas, and determining periods and places where harvesting and fishing are banned.

“The Amazon is an extraordinary reservoir of resources such as water, forest, plants and animals. Destroying all this wealth by logging, mining and other predatory activities, not to mention clearing the forest for pasture, reflects a complete lack of vision for the present and future. The resources available should be used sparingly and intelligently. The knowledge needed for this to be done already exists.”

Paes is also a co-author of a handbook on innovative management of urban solid waste published recently by CEISA-FGV and now being distributed free of charge to municipal governments throughout Brazil.