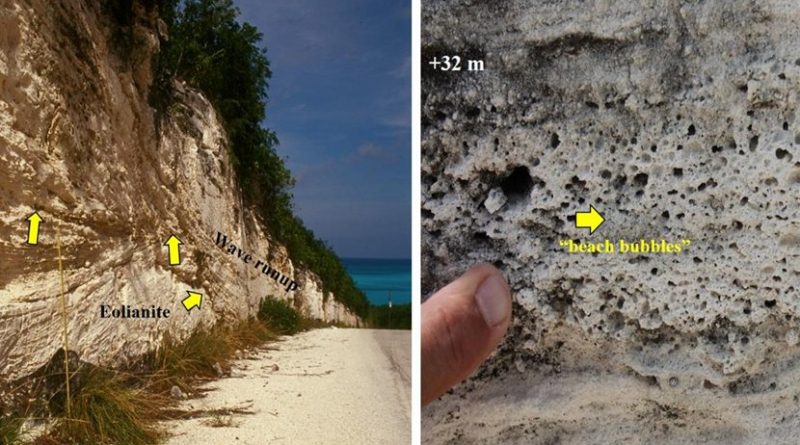 The image on the left shows eolian (lower) and runup bedding (upper) exposed in a roadcut on Old Land Road on Great Exuma Island (road elevation +23 meters). On the right are thick beds with fenestral porosity, or 'beach bubbles,' showing that massive waves ran up over older dunes exposed in a roadcut on Suzy Turn Road along the Atlantic Ocean east side of Providenciales, Turks and Caicos Islands, BWI. Credit: Marine Geology

While strong seasonal hurricanes have devastated many of the Caribbean and Bahamian islands this year, geologic studies on several of these islands illustrate that more extreme conditions existed in the past. A new analysis published in Marine Geology shows that the limestone islands of the Bahamas and Bermuda experienced climate changes that were even more extreme than historical events. In the interest of our future world, scientists must seek to understand the complexities of linked natural events and field observations that are revealed in the geologic record of past warmer climates.

In Bermuda and the Bahamas, the geology of the last interglacial (LIG; approximately 120,000 years ago) is exquisitely preserved in nearly pure carbonate sedimentary rocks. A record of superstorms and changing sea levels is exposed in subtidal, beach, storm, and dune deposits on multiple islands. Extensive studies by the authors over the past decades on these islands have documented stratigraphic, sedimentologic, and geomorphic evidence of major oceanic and climatic disruptions at the close of the last interglacial.

While perhaps more mundane than the megaboulders (found only locally on Eleuthera), the sedimentological structures found within chevron ridge and runup deposits across islands throughout the Bahamas and Bermuda point to frequent and repeated inundation by powerful storm waves, in some locations leaving storm deposits tens of meters above sea level.

During the last interglacial, sea levels were about 3-9 meters higher than they are now. The geologic evidence indicates that the higher sea-levels were accompanied by intense “superstorms,” which deposited giant wave-transported boulders at the top of cliffed coastlines, formed chevron-shaped, storm beach ridges in lowland areas, and left wave runup deposits on older dunes more than 30 meters above sea level. These events occurred at a time of only slightly warmer global climate and CO2 (about 275 ppm) was much lower than today.

The authors emphasize “the LIG record reveals that strong climate forcing is not required to yield major impacts on the ocean and ice caps.” In our industrial world, rapidly increasing atmospheric CO2 has surpassed 400 ppm, levels not achieved since the Pliocene era about 3 million years ago, while global temperature has increased nearly 1 °C since the 1870s. Today, ice sheets are melting, sea level is rising, oceans are warming, and weather events are becoming more extreme.

Drs. Hearty and Tormey conclude that with the greatly increased anthropogenic CO2 forcing at rates unmatched in nature, except perhaps during global extinction events, dramatic change is certain. They caution that, “Our global society is producing a climate system that is racing forward out of humanity’s control into an uncertain future. If we seek to understand the non-anthropogenic events of the last interglaciation, some of the consequences of our unchecked forward speed may come more clearly into focus…a message from the past; a glimpse into the future.”