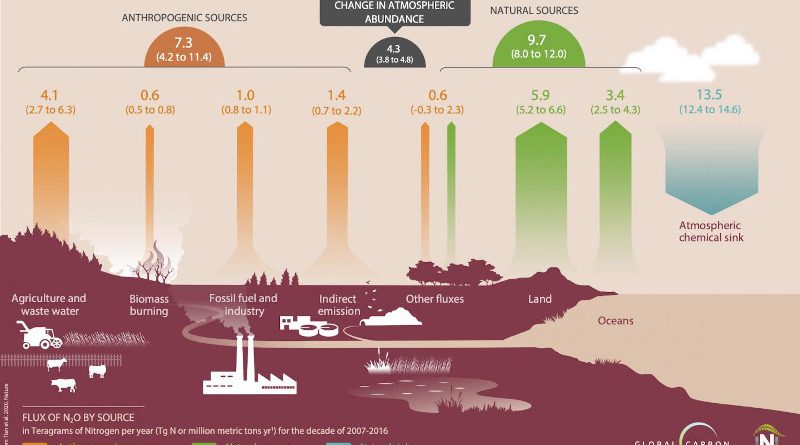 An international team of researchers – including Earth system scientists at the University of California, Irvine – recently completed the most thorough review yet of nitrous oxide from emission to destruction in the planet’s atmosphere.

In addition to confirming that the 20 percent increase in the amount of the greenhouse gas since the start of the Industrial Revolution can be totally attributed to humans, the team expressed doubt about the ability to reduce emissions or mitigate their future impacts.

In a study published this week in Nature, the researchers document the details of human-sourced N2O emissions and how they have intensified by 30 percent over the past four decades, the dominant share coming from synthetic nitrogen fertilizers and animal manure used in agriculture. The paper notes that emerging economies – particularly Brazil, China and India – are becoming major emitters of the gas as they increase their food production. Once released into the air, nitrous oxide remains for about 116 years.

The buildup of N2O, which is generated naturally as well as through human activities and is also known to deplete stratospheric ozone, creates a dilemma for nations working to put the brakes on runaway climate change, according to co-author Michael Prather, Distinguished Professor of Earth system science at UCI.

“Nitrous oxide emissions are increasing faster than any scenarios considered by the Intergovernmental Panel on Climate Change – so fast that if left unchecked, they along with carbon dioxide will push the rise in global mean temperature to well above 2 degrees Celsius from pre-industrial levels, the nominal goal of the Paris climate agreement,” he said.

Scientists estimate that to achieve this end-of-century objective, cumulative CO2 emissions should not exceed about 700 gigatons throughout the next 80 years; to limit global warming to an even more ambitious 1.5 degrees, this sum drops to 500 gigatons.

“There is some cautious optimism that these goals are achievable if we can curtail fossil fuel emissions and take steps to actively remove CO2 from the atmosphere,” Prather noted.

Nitrous oxide is a considerably more stubborn greenhouse gas, however. The study found that these emissions have always exceeded expectations, and with nitrogen use being tied to food production, there appear to be limited ways of significantly mitigating the gas’s release.

Further, unlike CO2, N2O is not photosynthesized by plants, nor is it chemically reactive enough to be sequestered through geoengineering methods. Prather said that the path to controlling N2O emissions is through more efficient use of fertilizer and the land on which livestock are raised.

According to him, if current nitrous oxide emissions continue, they will be equivalent to about 230 gigatons of cumulative CO2 emissions by the end of the century – almost half of the total CO2 emissions allowed to remain within a 1.5-degree global temperature increase.

“The most optimistic scenarios call for N2O emissions to be cut to the equivalent of 178 gigatons of CO2,” Prather said. “But our paper shows that this will be difficult to achieve because N2O emissions are not tied to the carbon sector but to agriculture, which must continue to expand with population and gross domestic product growth.”

He said the study is an important step in confronting the challenge presented by this uncooperative greenhouse gas.

“Compared to the well-established understanding of the contributions of carbon dioxide and methane to climate change, nitrous oxide had long been assumed to be the most ‘uncertain’ of greenhouse gases,” Prather said. “With this paper, we can confirm that N2O sources and sinks are now well-defined and attributed, so tackling the task of reducing emissions can be accompanied by appropriate checks and validation procedures.”

He said that the often-forgotten, third-most-important greenhouse gas may become a long-term threat to controlling climate change.