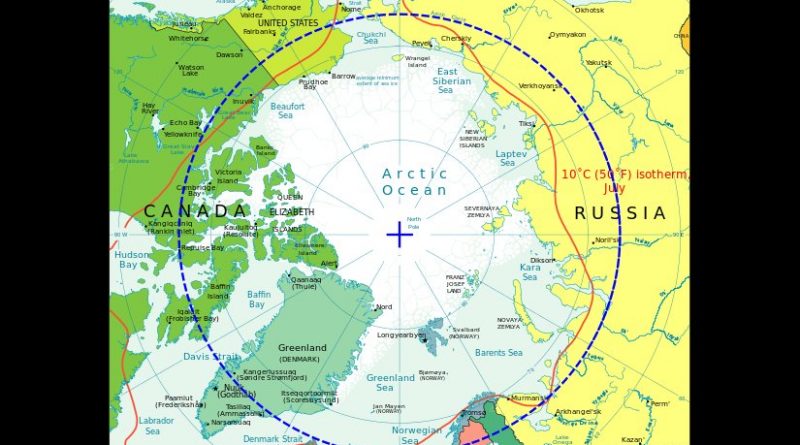 Over the past decade, Moscow has been projecting its power, and boldly testing the cohesion and determination of the North Atlantic Treaty Organization (NATO), the European Union (EU), and their closest allies in many different regions either considered unstable or contested for their strategic value. Some of these clashes took place immediately after the Soviet Union dissolved while others occurred during the turn of the century and closer to (even up to) the present day. Violent political and ethnic conflict has occurred in the former Soviet republics but also well beyond the borders of the Russian Federation as it exists today. Not all of those conflicts have proven decisive; many remain in stalemate or are simply “frozen.” A non-exhaustive list of those conflicts includes: Moldova, Georgia, Armenia, Azerbaijan, Transnistria, Abkhazia, South Ossetia, Crimea, Novorossiya, and Syria.

The Arctic attracted headlines more than half a decade ago when Russia planted a flag at the bottom of the Arctic Ocean. Russia has also been intensifying its military flights that violate European and North American airspace in addition to sending ships to the Caribbean, South Asia, and testing United States (US) coastal security. Much of the world’s attention has been focusing on the EU’s ongoing migrant crisis, the “Arab Awakening,” the rise of ISIS in the Middle East, and the current multifaceted conflict in Syria and Iraq. But Moscow’s interest in the Arctic has remained in place. Many analysts argue that war is brewing. Others maintain that while he is willing to test his adversaries, Putin clearly recognizes which issues would be suicide for Russia.

Will Russia and Canada come to blows over the Arctic? If so, what are the stakes, and is Canada ready?

Interest in claiming Arctic territory is primarily driven by the quest for Arctic resources. Until recently, the resources of the Arctic were deemed too difficult and expensive to develop. But with increasing access and soaring energy prices, the Arctic’s wealth, which is conservatively estimated to contain up to 25 percent of the world’s remaining oil and gas reserves, including over 100 billion barrels of oil, is being explored with ever greater fervor; even despite Royal Dutch Shell PLC’s recent decision to hit the stop button on its multi-billion dollar search for oil in Alaska’s Chukchi Sea. Nonetheless, these resources, which have not yet been exploited, are estimated at some $20 trillion – 15 times that of Canada’s entire economy. The oil is far more attractive on the Russian side because of the current state of the country’s infrastructure in the region, including numerous harbor facilities. Compared to Russia’s 17 points of safe harbor, Canada’s Nanisivik is still in the planning phase.

Senator Lisa Murkowski stated that the Northwest Passage was completely ice-free in 2008 for the first time in history. The absence of ice on this normally dangerous route captured the attention of many countries. Even China, India, Italy, Japan, Singapore, and South Korea have been admitted to the Arctic Council as observers 2013 due to their growing interests. As interest in the Arctic and its issues grows, the inadequacy of existing instruments and institutions fosters legal, resource, as well as military and defense contestation. The Arctic Council focuses principally on issues of climate change/impact and biodiversity yet is ill-equipped to address issues pertaining to Arctic militarization. There is the Nordic Defense Cooperation (NORDEFCO) union, which consists of Denmark, Iceland, Sweden, and Finland, but the group of nations does not preside over Arctic interests in relation to Canada exclusively.

In response to the ice-free summer, Canada announced its intentions to establish an Arctic military training facility and deep-water port on the Northwest Passage. Additionally, Ottawa reported that it would undertake the construction of a handful of ice-strengthened patrol boats and icebreakers that would be in operation by 2014. The aim was to assert sovereignty in the Arctic. That plan has fallen drastically short of expectations in Ottawa and came to be known as Canada’s ‘Arctic inaction.’ The single icebreaker that was to be built came with the enormous price tag of $720 million (which eventually rose to $1.3 billion) and an expected delivery date of 2017. The Royal Canadian Navy (RCN) is simply not ready for future military conflict in the Arctic despite the Arctic/Offshore Patrol Ships (A/OPS) project initiated under the leadership of Stephen Harper. The A/OPS initiative was also a dismal failure. Moreover, The RCN has not been present in the Arctic for well over five decades. Since the 1950s, the Canadian Coast Guard (CCG) has been tasked with “protecting” the Arctic.

Delays and budgetary constraints have left Canada exposed to Russia as its immediate rival in the region. Noting Putin’s imperial ambitions, Canada’s new Liberal government can hardly turn its attention from the high north and what should be one of Canada’s most important foreign policy areas. The changes evident in the building program of the Russian navy demonstrate that at least one critical element of Russia’s armed forces has been and continues to be dimensioned approximately to the country’s most critical needs, and along lines that enables it to preserve its strategic dividends in this particular part of the world. That is not to say that the Russian military would likely hold a monopoly in military terms over the entire Arctic region, but certainly there is a gradation of power and strategic control, the bleeding point of which is Russia’s current legal and political territory.

Moscow is currently directing some of its resources toward the renewal of its old military bases and even building new ones to support its current and future Arctic endeavors. In its new doctrine, the Arctic is a naval priority. The Kremlin has also recently stated that it will strengthen its naval forces in the Arctic and Atlantic regions in response to NATO military exercises that have been held close to Russia’s borders. Against a backdrop of Canadian attempts to sort out its budgetary problems and no vision for the immediate future of Canada’s Arctic security, Moscow announced that its navy will be receiving a new fleet of icebreakers. In early 2015, the largest Arctic war games ever took place with roughly 35,000 Russia troops, 50 surface and sub-surface ships, and over 100 aircraft. Russia’s plans also include upgrading the airfield on Novaya Zemlya to accommodate modern fighter aircraft as well as sophisticated S400 air defense systems. Moreover, a newly formed 6,000 troop military group comprised of a couple of motorized infantry brigades will be stationed in the Murmansk area in the Kola Peninsula and the Yamal-Nenets Autonomous Region. When the military is ready to move into the north, this is a good indication that critical infrastructure will either follow or is already in place.

Right now Russia owns 22 icebreakers with another 19 specialized ships held by Russian industry, and about 25 ice-capable attack submarines. By contrast, only three out of four of Canada’s decrepit Victoria-class submarines are available for operations. These boats are essentially worthless and have been holding the RCN back through ballooning upkeep costs and commitment to a $1.5 billion life-extension plan to enhance the functionality of the aging fleet. Completing scrapping the program, in favor of just one or two newer submarines, and committing its new boats exclusively to Arctic role would be a positive step for the Canadian government. Commander Jeff Bierley, of the US Navy submarine Seawolf explained that the “submarine is the best platform to operate in the Arctic because it can spend the majority of its time under the ice.” Nearly three decades ago, the Canadian government concluded that it needs 10 nuclear-powered submarines if it were to consider enforcing its claim to Arctic sovereignty at all feasible. Today it has none. But even small, non-nuclear (i.e., diesel-electric) attack submarines would be incredibly effective at protecting Canada’s Artic waters and would pose a significant threat to larger nuclear submarines operating under the icecaps. Although outnumbered by the US fleet of 41 nuclear powered attack submarines, Russia’s warships will likely outclass the old and decaying Royal Canadian Navy for years to come. The sovereignty issue needs to be critically important to all NATO members and to all EU (even European) countries. Former Defense Minister Perrin Beatty once reasoned that, “NATO has to appreciate the fact that, if it is abhorrent for Europe to have a single square inch of European soil invaded by a foreign power, it is no less abhorrent for Canadians to contemplate a single square inch of their territory being penetrated in a similar way.”

Even though no open conflict has yet been witnessed between countries over the Arctic’s resources, a road map to violence is emerging. This is not based on the energy element or climate change but Russia’s military program alone makes a considerable contribution. Bearing this possibility in mind, Russia has begun a process that will equip its national foreign policy with the teeth necessary to actively seek to acquire economic interests in Arctic zones, as well as to defend claims made with regards to economic, political, and strategic elements. Even in spite of a strained economy, challenges inside Russia, commitments lying far from Russia’ borders, and a declining list of reliable allies, Putin is pressing forward with his Arctic ambitions and compelling Arctic states to face the reality of a militarized high north. What can be obtained in the Arctic is expressed in terms of what kind of resources one puts into it, be it military, human, financial, or political resources. These represent powerful new strings in the bows of those wishing to obtain ownership over the wealth of the Arctic. For Canada, the needs are everywhere, and while daunting, cannot be ignored or receive paltry responses for another three or four decades.

One thought on “Militarizing The Arctic: Is Canada Ready For A Literal Cold War With Russia? – Analysis”