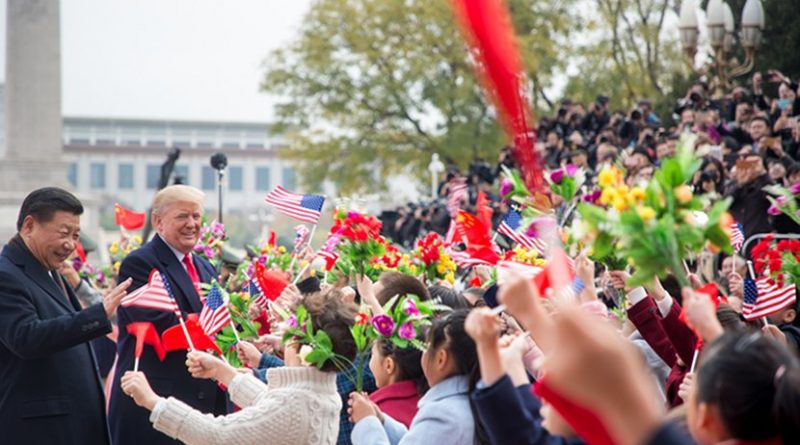 Nearly two years on, the Asia policy of US President Donald J. Trump’s administration is beginning to take shape. With the exception of its attempt to get North Korea to give up its nuclear weapons, it is mostly about China, or more accurately, what other countries can do to help it win its struggle with China for dominance in the region. Indeed, that seems to be the common prism through which a patchwork of US Asia initiatives is originating and being implemented. Its Asian allies and friends are beginning to see it this way and that US strategic policy toward them is much more about advancing its position vis a vis China than their own priorities.  They are responding accordingly.

Here is the context and their probable perspective.

US China policy is now clearly a mix of containment and confrontation. The new US National Security Strategy released in December 2017 https://www.whitehouse.gov/wp-content/uploads/2017/12/NSS-Final-12-18-2017-0905-2.pdf  characterizes the US-China struggle as “a geopolitical competition between free and repressive visions of world order… “. It also labels China as a “revisionist power” meaning that the U.S. thinks China wants to change the existing rules, norms and values that govern relations between nations. This is the “international order” that the U.S. helped build and now leads, and for which it is the principle arbiter and beneficiary. Following this lead, the US Congress passed the National Defense Authorization Act that identifies China as the primary threat to US security and proposes a “whole of government” counter-effort.

Doubts regarding the more strident tone and tenor of US-China policy were laid to rest by US Vice President Michael Pence’s 4 October ‘it’s us or them’ speech. https://www.whitehouse.gov/briefings-statements/remarks-vice-president-pence-administrations-policy-toward-china/ He bluntly criticized China across the board and declared that “China wants nothing less than to push the United States of America from the Western Pacific and attempt to prevent us from coming to the aid of our allies”.  Confirming the policy shift, US National Security Adviser John Bolton said “The recent policy of the Trump administration to act against China has taken the Chinese by surprise _ _ _” https://economictimes.indiatimes.com/news/defence/china-engaging-in-behaviour-that-is-troubling-japan-india-and-others-bolton/articleshow/66473844.cms

To combat the China ‘threat’, the official US strategy is to ” redouble [its] commitment to established alliances and partnerships, while expanding and deepening relationships with new partners that share respect for sovereignty, fair and reciprocal trade, and the rule of law.”  https://www.state.gov/p/sca/rls/rmks/2018/277742.htm This means the U.S. is increasing pressure on its allies and friends to support its new more belligerent China policy.

Its strategy is manifest in its grand vision of a “Free and Open Indo-Pacific”. https://www.youtube.com/user/statevideo.  The core principles of the ‘Free and Open Indo-Pacific’ include freedom of navigation, the rule of law, freedom from coercion, respect for sovereignty, private enterprise and open markets, and the freedom and independence of all nations. https://warontherocks.com/2018/03/unpacking-the-free-and-open-indo-pacific/   These are all elements of its new China policy.  So is its enhanced military and political relations with Taiwan. https://www.businessinsider.com/pentagon-official-tells-taiwan-to-modernize-its-military-facing-china-threat-2018-11 Within this framework, the U.S. is proposing – and pushing for – a renewal of the “Quad” – a potential security arrangement among the four large democracies of India, Australia, Japan, and the U.S. . To Asia, the intent of the Quad is to constrain and contain China’s burgeoning military power.  The U.S. is seeking to “reinforce India’s maritime capabilities as a net provider of security in the Indian Ocean region and beyond.”

Let’s look at some specifics. Although promulgated before Trump became President, the implementation of the 2015 US Asia Pacific Maritime Security Strategy https://dod.defense.gov/Portals/1/Documents/pubs/NDAA%20A-P_Maritime_SecuritY_Strategy-08142015-1300-FINALFORMAT.PDF complements its overall strategy regarding China. It declares that the U.S. is enhancing its defense posture in Southeast Asia. Its intent is to strengthen “our military capacity to ensure the United States can successfully deter conflict and coercion and respond decisively when needed.” To accomplish this, the U.S. is “working together with our allies and partners from Northeast Asia to the Indian Ocean to build their capacity to address potential challenges in their waters and across the region.”  Presumably this means first and foremost combating the China “threat”. The Strategy specifically warns that “we see countries developing new technologies that appear designed to counter [existing US] advantages.   This is a reference to China’s anti-access/area-denial strategy to keep the U.S. military out of its near waters in a conflict.

US policy initiatives toward Southeast Asia and allies like Australia and Japan are a derivative of its policy of containment and confrontation of China. They are dominated by what these countries can do to support this effort. The U.S. appeals to them to support its Freedom of Navigation Operations challenging China’s claims in the South China Sea—or to at least undertake their own. The U.S. wants them to join its maritime domain awareness network and is assisting them to do so.  It asks them to allow it to base or “rotate” its troops and equipment on their territory or to facilitate their presence and missions in the region by providing refueling locations for its planes gathering intelligences on China. For those that can, like Australia and Japan, the U.S. wants them to provide military assistance and training to key countries in the region to enhance their capacity to assist the U.S. in a time of need. Perhaps most important, the U.S. wants them to publicly welcome and support its political position and military presence in the region. So far the results are embryonic and mixed.

The U.S. is also making increasingly strident attempts to counter China’s growing soft power.  Because the US cannot hope to match China’s economic largesse, it’s soft power increasingly relies on the attraction of its economic and political values and the shared commitment of its allies and friends to democracy and the existing US led international order. Thus the U.S. has launched a campaign touting these values publicly condemns China’s value and behavior, and warning others of China’s nefarious intentions – in general and in particular in the South China Sea.  Moreover it has stepped up its “diplomatic” efforts to persuade Southeast Asians to support its policy. In January, US Secretary of Defense James Mattis visited Indonesia and Vietnam. His mission was to begin implementing the new US Defense Strategy that calls for expanding and transforming Washington’s network of alliances and partnerships in the Asia-Pacific into a “networked security architecture”. In late July/early August US Secretary of State Mike Pompeo attended the Shangri-la Dialogue and the ASEAN Regional Forum in Singapore. Aside from the lobbying he did there, he also visited Malaysia and Indonesia presumably pushing this policy that at base is aimed at China.

Ironically, the more the U.S. hardens its policy against China and increases its pressure for support from the region, the more its “soft power’ wanes. Its ‘allies and friends’ in Southeast Asia in particular do not want a confrontation between the U.S. and China – at least one that will involve or negatively affect them.

Their particular concern is that the intensifying competition for influence and military dominance in the region could spill over into their domestic politics with the U.S. and China each supporting its supporters and opposing its opponents.  This happened during the Cold War between the U.S. and the Soviet Union and it could happen again. They rightly fear that in the supposed words of Thucydides “the strong will do what they can and the weak will suffer what they must”.

So Southeast Asian leaders are doing the best they can to preserve a modicum of independence and security for their nations. They are hedging between the two. As former Australian Prime Minister Kevin Rudd puts it  “many US allies may decide to hedge their bets, waiting until it becomes clearer whether the US [policy] shift will be permanent and whether it will succeed.” https://www.foreignaffairs.com/articles/china/2018-10-22/how-avoid-avoidable-war Meanwhile they are increasingly aware that they are becoming pawns in a US-China ‘Great Game’ and that the policy of the U.S.  – – as well as that of China – –  towards them must be viewed through this prism.

This piece first appeared in the IPP Review. http://ippreview.com/index.php/Blog/single/id/830.html