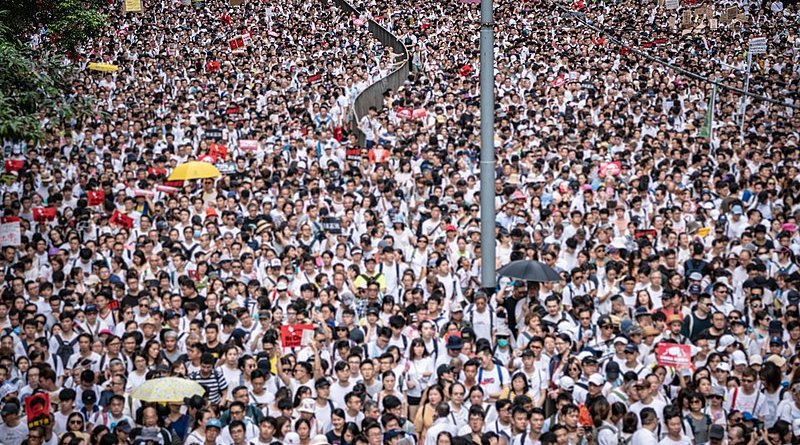 The ongoing protests in Hong Kong have seized the attention of international media and is an inflexion point in the ‘One Country, Two Systems’ model. What can we learn from the Chinese Communist Party’s own historical involvements in Hong Kong to understand how Beijing views this city today, particularly in its claims of ‘foreign interference’?

A common refrain from Beijing on the ongoing protests, demonstrations and marches regarding the proposed Extradition Bill that have rocked Hong Kong since March of 2019 is the claim that ‘external forces’ are driving the protests. The ‘black hands’ of foreign Western interference, it is purported, are supplying the knowledge, resources and finance to sustain the movement.

Indeed, the passing of the Hong Kong Human Rights and Democracy Act by the United States’ House of Representatives on 15 October 2019 certainly gives the mainland government more fodder for this view. The veracity of these allegations aside, we point to the often-elided historical antecedents of the Chinese Communist Party (CCP) in Hongkong to understand the frequent references to ‘foreign interference’ in the former British colony: the CCP’s own interventions in British Hong Kong.

Chinese ‘Foreign Intervention’ of the Past

In that way, worries of the mainland government regarding ‘foreign intervention’ in Hong Kong are partially due to the fact that it was once one of these political factions which partook in interference in the former British colony during the Chinese Civil War and the early Cold War. For Beijing, ‘foreign interference’ is also a mirror for the CCP’s historical self-projection of its role in overseas revolution. Because of the Chinese Civil War with the Kuomintang (KMT), the CCP clandestinely extended their recruitment of loyal subjects in Hong Kong between 1947 and 1949.

They established the Xinhua News Agency in Hong Kong in 1947 as a start of the Communist representation in this city. Under the wing of Xinhua, the CCP United Front Work Department and Propaganda Department made joint efforts to undermine potential rivals in Hong Kong by incorporating Communist sympathisers and isolating opponents. The CCP South Bureau also based itself in this city, and infiltrated the fields of labour, education and others.

Leveraging on Xinhua and South Bureau, the CCP gained a permanent foothold in Hong Kong so that they could work with any political groups who were not in favour of Chiang Kai-Shek. One crucial example was the attempt to win the hearts of the Chinese “Third Force” people throughout the late 1940s.

This departure, arranged by the CCP intermediaries, was done in order to create a symbolic image that the Communists claimed a more legitimate representation of Chinese government than the Nationalists, because it had obtained genuine support from the neutralist democratic parties.

CCP as a ‘Foreign Force’

Back then, in the eyes of London, the CCP represented one of the ‘foreign forces’ that might have threatened the interests of British colonial governance in Hong Kong in the aftermath of World War II. The British governor of Hong Kong − Sir Alexander Grantham − speculated that the CCP would use Hong Kong (especially through the ‘South Bureau’) as a regional (rather than local) web that would cascade its activities throughout South China, French Indo-China, and the Philippines.

Grantham was further concerned that the CCP would potentially plot the fifth column with overseas Chinese communities through a small group of Communist-trained agents and organisers in Southeast Asia, especially in British Malaya.

Of course, we are not claiming an equivalence between ‘foreign interference’ on CCP’s part, over what it sees as its (eventual) legitimate territory with purported ‘foreign interference’ in Hong Kong today. What is, nevertheless, important to recognise is that Beijing’s own history of ‘interference’ in Hong Kong during British rule has profoundly influenced the ways they see how this city can be manoeuvred by a large variety of internal and external forces.

This influence often interweaves with China’s historical mentality of ‘victimisation’, or in the CCP’s own phrase, “a century of humiliation”. And Hong Kong, in the political rhetoric of both the KMT and the CCP, was historically and is even today remembered as the beginning of this frustration.

The Treaty of Nanking & Its Implications

The Treaty of Nanking of 1842 had conceded the Island of Hong Kong from the Great Qing to the British Empire. In the following century, the Chinese continuously saw how the successive ‘unequal treaties’ from one to another, allowed their ports and territories to be mutilated, conquered and colonised by imperial powers from both the West and Japan.

For example, the Treaty of Shimonoseki in 1895 had given Taiwan to Japan. The Boxer Protocol of 1901 made an appallingly excessive silver indemnity to foreign powers who jointly suppressed the Boxer Rebellion, over a course of 39 years.

All these historical humiliations, in turn, played an indubitable effect in heightening the vulnerability of Hong Kong against the CCP’s own ‘intervention’ during the early Cold War, and feeding into the social-political milieu under which Beijing developed its policies towards the Pearl of the Orient.

More broadly, the CCP’s own historical experience has also shaped its policies towards Southeast Asia. One recalls, for instance, the extensive campaign in the early 1950s that called for the ‘return’ of Chinese business as well as technological emigrants from Indochina, for the purpose of building a ‘New China’.

The CCP also fought against the KMT for political allegiance from ethnic Chinese in Indonesia under Sukarno’s government, as much as in Hong Kong. In that way, the historical antecedents of interference in Hong Kong is not only germane for our understanding of the tumultuous moment in the city but is also, potentially, a broader reflection of China’s geopolitical aspirations in Southeast Asia.

*Dylan M.H Loh is an Assistant Professor at the Public Policy and Global Affairs Division, Nanyang Technological University (NTU), Singapore. Chen Hao is a PhD Candidate at the History Faculty, University of Cambridge and is also a visiting PhD scholar at the National University of Singapore (NUS). They jointly contributed this to RSIS Commentary.