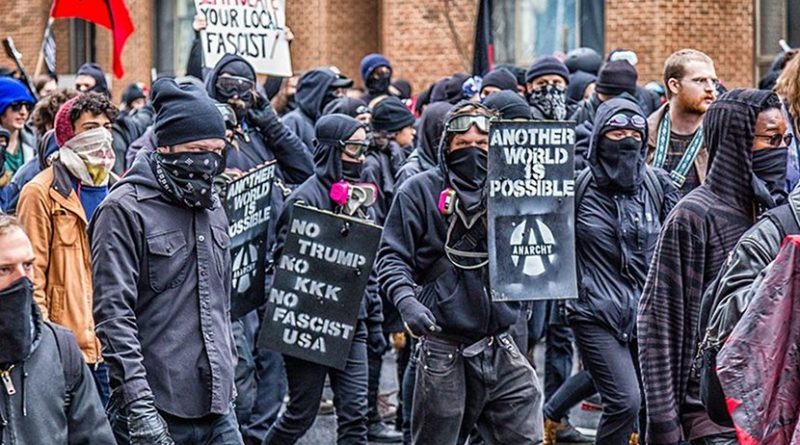 On May 31, 2020, President Donald Trump announced via Twitter that the United States will be designating “antifa” — this term is applied to an organization of loosely affiliated individuals who describe themselves and their ideological outlooks as “antifa”(shorthand for“antifascist”) — as a domestic terrorist group. Some media and law enforcement reports suggest that antifa members may be responsible for some of the violence and looting that has taken place amid the protests that have occurred recently in various U.S. cities. Further, some reports indicate that antifa members have been involved in peaceful protests as well.

This In Focus discusses the background of the U.S. antifa movement, whether or not members and their actions may be categorized as domestic terrorists and domestic terrorism, respectively, and issues around designating domestic groups as terrorists.

Antifa members view themselves as part of a protest tradition that arcs back to opposition groups in Nazi Germany and fascist Italy prior to World War II. U.S. antifa activism traces its roots back to antiracists who mobilized in the1980s while opposing the activities of racist skinheads, members of the Ku Klux Klan (KKK), and neo-Nazis. Founded in 2007, The Rose City Antifa in Portland, OR, is the oldest U.S. group to use “antifa” in its moniker.

Antifa groups in the United States gained prominence following violent clashes between white supremacists and their opponents, including antifa supporters, in Charlottesville, VA, on August 12, 2017.

The U.S. antifa movement appears to be decentralized, consisting of independent, radical, like-minded groups and individuals. Its tenets can echo the principles of anarchism, socialism, and communism. Members do not necessarily adhere to just the tenants of these philosophies, however.

Among many other things, they may also support environmentalism, the rights of indigenous populations, and gay rights.

Contemporary U.S. antifa adherents likely do not share a list of enemies, as the movement lacks a unifying organizational structure or detailed ideology that might shape such a list. Local groups do not necessarily listen to each other’s pronouncements and might aim their animus at enemies specific to their group.

Further, “fascism” is notoriously difficult to define. Thus, particular antifa groups may oppose different things based on how they identify who or what is fascist.

Some members are willing to commit crimes, some violent, to promote their beliefs, although much antifa activity involves nonviolent protest such as hanging posters, delivering speeches, and marching. As a core purpose, antifa groups track and react to the activities of individuals or groups they see as advocating fascist views, such as neo-Nazis, racist skinheads, whitesupremacists, and white nationalists.

While few concrete antifa principles exist across all groups, U.S. supporters have articulated four shared “obligations.” According to some adherents, antifa groups must (1) track the activity of fascist groups, (2) oppose their public organizing, (3) support antifascist allies attacked by fascists or arrested by police, and (4)not cooperate with law enforcement.

Antifa adherents believe that civil liberties protections provide safe harbor to ideas and people bent on harming vulnerable populations in the United States. Thus, antifa followers tend not to accept that the conventional government capacities will thwart the rise of fascist movements. They lack faith in the ability of law enforcement to investigate or prosecute fascists who break the law, especially during shows of force at public marches, and some are willing to engage in criminal acts — taking the law into their own hands — when confronting their foes or expressing their own ideas.

When it has occurred, interpersonal violence during demonstrations has ranged from street fights involving groups to“Nazi-punching,” which, as the term suggests, involves an individual assaulting a perceived enemy. Antifa followers have also caused property damage at protests. In some instances, antifa followers show up at protests prepared for physical skirmishes, carrying weapons as well as gear such as shields and helmets.

Violence by U.S. antifa members is not new. For example, in 2012 Anti-Racist Action (ARA; an antiracist group now known as The Torch Network or Torch Antifa ) attacked a meeting of the Illinois European Heritage Association, consisting of white supremacists from the National Socialist Movement and people from other groups. Brandishing items such as hammers, baseball bats, and police batons, the attackers entered a Chicago-area restaurant and assaulted meeting attendees.

Antifa movement literature emphasizes a number of ways to“take action.” The same movement source that describes antifa “obligations” urges followers to pursue some activities that appear to be fairly ordinary, lawful protest fare, as well as other activities that seem more confrontational.

Among its suggestions, it encourages adherents to do the following:

The Federal Bureau of Investigation (FBI) has expressed increasing concern about violence perpetrated by antifa supporters. In congressional testimony in November2017, FBI Director Christopher Wray said that the FBI was pursuing “a number of what we would call anarchist extremist investigations, where we have properly predicated subjects [people] who are motivated to commit violent criminal activity on kind of an antifa ideology.”

While the FBI has confirmed that antifa and other extremists are subjects of ongoing domestic terrorism investigations, it declines to designate any organization a “domestic terrorist organization.” Doing so may infringe on First Amendment-protected free speech — belonging to an ideological group in and of itself is not a crime in th e United States. Further, as previously stated, antifa is a decentralized movement, and law enforcement designation of antifa as a singular group may prove to be difficult.

In July 2019 congressional testimony, Director Wray said the FBI does not investigate ideology; it investigates violence. When it comes to characterizing ideologically inspired criminal actors for investigative purposes, the FBI occasionally confronts suspects who can be viewed as terrorists, but it is important to note that domestic terrorism is not a chargeable federal offense.

While an individual may still have committed criminal acts that are widely considered domestic terrorism, the individual cannot be charged with committing an act of domestic terrorism under current federal law. For example, Timothy McVeigh, widely considered a domestic terrorist in the United States, was convicted of murder, conspiracy, and using a weapon of mass destruction in the 1995 bombing of the Alfred P. Murrah Federal Building in Oklahoma City that killed 168 people. The FBI and other federal law enforcement must rely on their working definitions and available tools to appropriately investigate these incidents.

*About the author: Lisa N. Sacco, Analyst in Illicit Drugs and Crime Policy

Source: This article was published by CRS