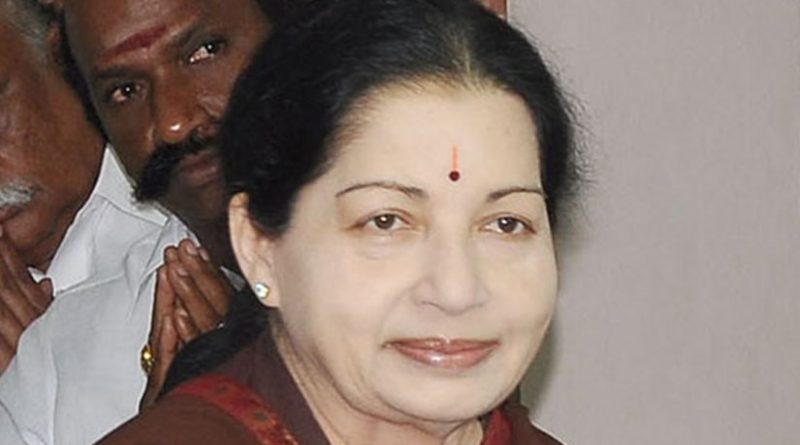 The passing away of J. Jayalithaa, the charismatic Chief Minister of Tamil Nadu removes a major political leader from the Tamil Nadu scene. The AIADMK party would find it very hard to replace her to carry on the legacy of the founder MGR. Her courage in adversity, total command over the party and her empathy with the poor enabled her to succeed time after time.

Tamil Nadu Chief Minister J. Jayalalithaa passed away on the night of December 5, after having been hospitalized at the Apollo Hospitals Chennai for multiple pulmonary and coronary complications for over two months. Her final resting place would be next to that of her mentor M. G. Ramachandran (MGR), overlooking the Bay of Bengal.

It has been a life of struggle, where all achievements have come out of hard effort and a strong will. Born to a Tamil Brahmin and an actress, her father passed away when she was only two, and her mother moved to Chennai in search of opportunities. She was a brilliant student at school, and also an accomplished dancer, winning the outstanding achievement award in her final year at school.

She wanted to study further and become a lawyer, she said, but her mother brought her into the film world. The unwilling girl became a star actress at the age at the age of sixteen, and then, for over fifteen years, was the most sought after lady lead for films for her beauty and talent. During this journey, she acted with MGR in over a dozen movies, and there were rumors of a relationship between the two.

In 1977, MGR became the Chief Minister of Tamil Nadu, leading his young party, the AIADMK to a thundering electoral success in Tamil Nadu. Until his death in 1987, there was no effective political opposition for him in the State. In 1982, he inducted Jayalalithaa into the party as ‘propaganda secretary’, and by 1984 had secured her a Rajya Sabha (upper house) seat in Parliament. She was popular in Delhi, and MGR used to consult her on all Delhi related matters. Other seniors in the party did not take to her, finding her somewhat aloof and imperious.

After MGR’s death in 1987, the party split into two factions, one supporting her, and the other, MGR’s wife Janaki. The split was short lived and it was evident that the people of Tamil Nadu had chosen Jayalalitha for wearing MGR’s mantle. She won a thundering victory at the State elections in 1991, becoming Chief Minister at the age of 43.

Her personal traits had been molded by her struggles in the film industry. Having no close family, she distanced herself from all but her close companion and live- in friend Sasikala, whose family had become like a second family for her. To the outside male world, she portrayed strength and decisiveness, ruling the party with an iron hand. She dismissed errant party men at will, confident in the support of the masses.

The elected party men knew that they were elected on her symbol, and that so long as she was around, she would be the leader. They called her Amma (mother), and personal sycophancy reached unheard of heights. She seemed to accept all this, perhaps with a tinge of contempt, and her imperiousness was often commented upon.

Towards the electorate, and especially the poor, she had a different face. MGR had been a populist Chief Minister, and launched several social welfare programms, most notable of which remains the mid-day meals programs for school children- a program that has been copied and emulated all over the country. In her stewardship, she extended populism to more and more programs and her promises extended to distribution of free rice and the creation of Amma canteens dispensing cooked food at heavily subsidized rates.

Ideologically, she was somewhat right of center, though with a strong populist streak. Economists have commented on the lack of attention to expenditure on infrastructure and industry, and the amount of public money being spent on freebies. Yet Tamil Nadu remains one of the more prosperous States in the country, leading in employment and GDP statistics.

It is the future that is somewhat uncertain. The AIADMK party has elected O. Paneerselvam, who has stood in for her earlier when she was arrested, as the Chief Minister, but he may not have the charisma to lead the party in elections. The administrative machinery of the state is very robust, and the arrangements following her death have been very orderly and well thought through. The State can carry on with the administrative machinery in place, but political leadership is necessary for future growth.

It is too early to speculate on the future, but it is true that Tamil Nadu has lost a strong, mercurial, but immensely popular leader. Her legacy would be all the good that she has done for the poor, especially women, who turned up in hundreds of thousands to pay their last homage to their beloved Amma.

About the author:
*Dr S Narayan is Visiting Senior Research Fellow at the Institute of South Asian Studies (ISAS), an autonomous research institute at the National University of Singapore. He can be contacted at [email protected] The author bears responsibility for the facts cited and opinions expressed in this paper.

Source:
This article was published by ISAS as ISAS Brief No. 457 (PDF)