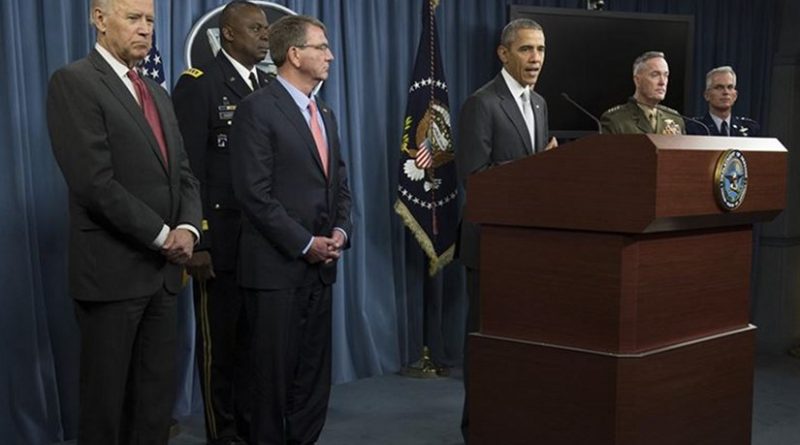 Although the court dismissed the complaint on jurisdictional grounds (discussed below) without reaching the merits of the challenge to the President’s authority, the case serves to highlight several ongoing issues related to Congress’s role in the ongoing military actions against the Islamic State, dubbed Operation Inherent Resolve.

As outlined in earlier CRS Reports, the Constitution allocates the power to carry out military operations to both the executive and legislative branches, but the breadth of Congress’s role in military operations has been the subject of longstanding debate.

Captain Smith argued that Operation Inherent Resolve exceeds the President’s commander-in-chief authority under Article II of the Constitution and the two existing statutory authorizations for the use of military force (AUMFs): the 2001 AUMF enacted in aftermath of the September 11, 2001 and the 2002 AUMF against Iraq.

The crux of Captain Smith’s complaint was the theory that, because Congress has not declared war or “specifically authorized” the use of force against the Islamic State, Section 5(b) of the War Powers Resolution requires the President to withdraw U.S. troops from hostilities no more than 60 days (or 90 days in certain cases) after they were introduced, which, in this case, was in mid-2014.

The Obama Administration initially cited the President’s constitutional authority under Article II as the sole legal basis for military operations against the Islamic State during the early months of the campaign, and before the timelines of the War Powers Resolution had arguably expired.

Since September 2014, however, the Administration has asserted that the 2001 and 2002 AUMFs already confer congressional authorization for the conflict—meaning no further congressional action would be required.

The 2001 AUMF authorizes force against the organizations that “planned, authorized, committed, or aided” the September 11 terrorist attacks, which has been interpreted to include al-Qaeda, the Taliban, and, at least in the context of wartime detention, other “associated forces.”

Captain Smith argued that Congress could not have intended to authorize operations against the Islamic State because that organization did not come into existence until three years after the September 11 attacks, and it severed ties with al-Qaeda eight years before the inception of Operation Inherent Resolve.

The Administration, which disputed the timing of the split with al-Qaeda, responded by contending that, regardless of when the schism occurred, terrorist organizations like the Islamic State cannot “control the scope of the [2001] AUMF by splintering into rival factions while continuing to prosecute the same conflict against the United States.”

The 2002 AUMF authorizes the President to use force to “defend the national security of the United States against the continuing threat posed by Iraq; and enforce all relevant [U.N.] Security Council resolutions regarding Iraq.” Captain Smith alleged that this authorization could not apply to the current conflict because the executive branch advised Congress by letter on July 24, 2014 that, “[w]ith American combat troops having completed their withdrawal from Iraq on December 18, 2011, the Iraq AUMF is no longer used for any U.S. government activities.”

The executive branch countered that, even though removing the threat posed by the Sadaam Hussein regime was the “primary focus” of the 2002 AUMF, that statute continues to authorize the President to use force for the related purposes of stabilizing Iraq and addressing terrorist threats that emerge from that nation. (Several earlier CRS articles explore these competing interpretations of the AUMFs and analyze the multiple proposals for new authorizations for use of force against the Islamic State introduced in the 113th and 114th Congresses.)

In addition to citing the existing AUMFs, the President argued that Congress “ratified” Operation Inherent Resolve “by appropriating billions of dollars in support of the military operations.” Although the Department of Justice’s Office of Legal Counsel has not issued a public opinion regarding the campaign against the Islamic State, it has, in the past, opined that appropriations measures can constitute authorization for the use of force if they “directly and conspicuously” focus on specific military actions.

The War Powers Resolution, however, appears to attempt to limit such an interpretation by stating that congressional authority to introduce U.S. forces into hostilities “shall not be inferred” from appropriations measures unless there is a specific statement of intent to the contrary.

Justiciability and Jurisdictional Hurdles to Adjudication of the Merits

While the challenge to the President’s legal rationale for Operation Inherent Resolve highlights the ongoing debate over the viability of the existing AUMFs, the court ultimately dismissed the case without reaching the merits based on two jurisdictional doctrines: standing and the political question doctrine.

First, the court concluded that Captain Smith lacked standing under Article III’s “case” or “controversy” requirement because he had not suffered a personal injury-in-fact that is concrete and particularized. Captain Smith argued that, under the 1804 decision Little v. Barreme, he had a duty to disobey orders that are beyond the legal authority of the commander-in-chief to issue, but the district court concluded that “there is no right, let alone a duty, to disobey military orders simply because one questions the Congressional authorization of the broader military effort.”

Citing several so-called “oath of office cases,” Captain Smith also alleged that he was forced to violate his oath to support and defend the Constitution by participating in an allegedly unauthorized conflict. But the court again disagreed, reasoning that, even if it were to be assumed there had been a violation of the War Powers Resolution, any violation was “based solely on the alleged actions of President Obama” in ordering the military operations rather than through the actions of individual servicemembers, such as Captain Smith, who were following orders of their superiors.

The court also distinguished certain Vietnam-era cases in which servicemembers were deemed to have standing to challenge their deployment. Unlike those past cases, Captain Smith did not claim his deployment was involuntary or that he faced the potential for serious bodily injury.

Second, the district court concluded that Captain Smith’s complaint presented a non-justiciable political question. Under the political question doctrine, federal courts will not resolve certain controversies when the resolution is more properly within the political branches—the legislative and executive. The government argued that decisions related to whether the Islamic State is an “associated force” under the 2001 AUMF and whether it forms part of the “continuing threat posed by Iraq” in the 2002 AUMF are questions that the courts are not equipped to answer and are better reserved for politically accountable government actors.

Captain Smith, on the other hand, cited the Supreme Court’s 2011 statement in Zivitofsky v. Clinton that statutory interpretation is a “familiar judicial exercise” for his position that the court need only analyze whether the President has correctly interpreted the AUMFs to allow the campaign against the Islamic State. The court ultimately adopted the government’s position, concluding that Captain Smith not only asked the court to interpret the 2001 and 2002 AUMFs—a traditional judicial function—but also to “second-guess the Executive’s application of these statutes to specific facts on the ground in an ongoing combat mission halfway around the world.”

Captain Smith may appeal the dismissal of his case to the United States Court of Appeals for the District of Columbia Circuit within 30 days. As hostilities against the Islamic State continue, and, in certain cases, intensify, the legal issues raised in Smith v. Obama, and the potential need for a new AUMF, may continue to be of interest to Congress.