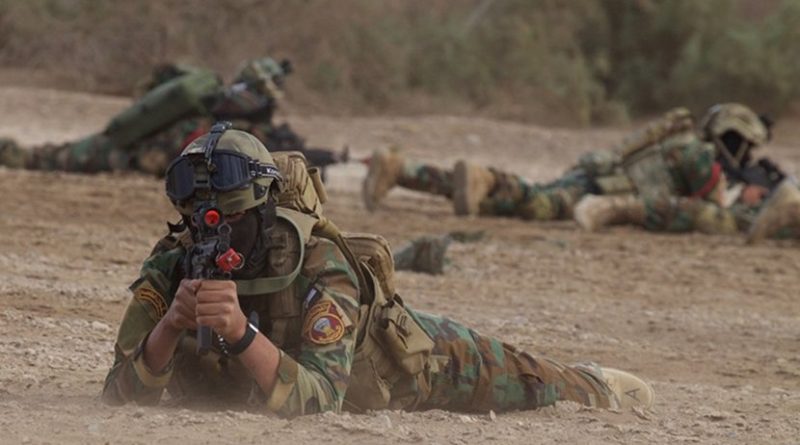 While Iraqi security forces and Syrian Democratic Forces have destroyed the idea of an Islamic State of Iraq and Syria ‘Caliphate,’ much work remains to be done against the terror group, Pentagon spokesman Army Col. Robert Manning said.

Over the weekend, Iraqi Prime Minister Haider al-Abadi announced that Iraqi security forces — including Kurdish peshmerga forces — had defeated ISIS in his country.

Abadi is proud of his troops who fought pitched battles — from Beiji to Mosul to Fallujah to Ramadi to Hit to Qaim — to defeat the group, which once threatened Baghdad.

“Iraqi security forces, to include the peshmerga, fought against a determined enemy and sacrificed greatly since 2014,” Manning said. “We congratulate all those who fought and remember all those who died to liberate Iraq from vicious ISIS territorial control.”

Iraqi forces were caught off guard when ISIS swooped in in 2014 and the terror group stopped just 30 miles from the Iraqi capital. The Iraqi government asked for aid, and coalition forces led by the United States stepped up. Soon, service members from around the world arrived to train Iraqi security forces, provide supplies and equipment and provide air support that stopped ISIS in its tracks.

As Iraqi forces gained more confidence, they began attacking ISIS and pushing the terror group back.

At the same time across the border in Syria, Kurds and Arabs — sick of ISIS’ brutality — formed the SDF. Coalition support enabled the group to take the fight to ISIS in areas that were once the terror group’s stronghold.

Now, Iraqi security forces and the SDF have taken back all the territory once held by ISIS. U.S. officials said there are fewer than 3,000 ISIS adherents in Iraq and Syria, with most of those in Syria.

The SDF and Iraqi forces — with coalition support — have liberated 7.7 million people from ISIS over the past three years.

But now is not the time to declare victory and go home, Manning said. “Much work remains to ensure ISIS’s lasting defeat and the government of Iraq can count on continuing coalition support as we work together to erase the stain of ISIS and to strengthen the institutions of Iraq’s national defense,” he said.

Manning confirmed that SDF and Iraqi leaders met near their shared border Dec. 10. They reaffirmed a collective commitment as they continued clearance and security in their respective areas of operation. The meeting was held near the border crossing at Qaim, Iraq and Abu Kamal, Syria.

The representatives agreed to coordinate security along the border, and will establish a joint coordination center to ensure border security.

The SDF will continue operations to clear the northern and eastern side of the Euphrates River valley. Iraqi forces will patrol throughout Iraq to ensure there is no resurgence of the terror group or rise of a similar ideology.

There are still small numbers of ISIS adherents in Iraq and Syria. The Iraqi forces and the SDF will continue to root them out, Manning said.

Securing the border is important for both Syria and Iraq. ISIS gained a foothold in Iraq, in part, from adherents of the group infiltrating over the very porous border from Syria.