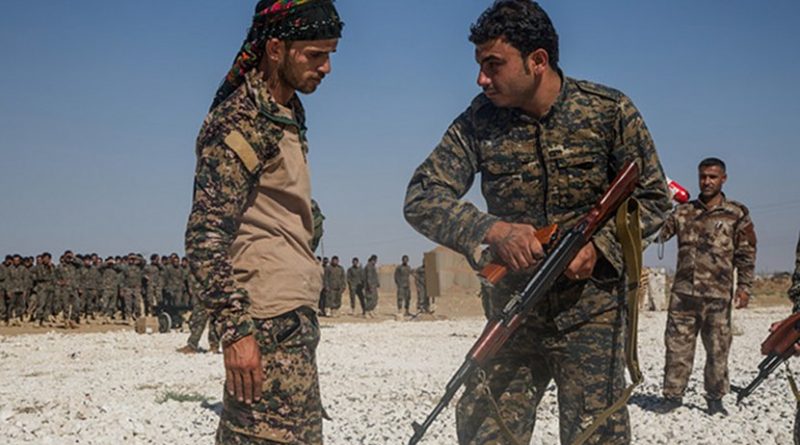 A trainee with the Pentagon-backed Syrian Democratic Forces learns how to use his AK-47-style rifle at a secret training camp. Photo: U.S. Army Sgt. Mitchell Ryan

On the campaign trail, in his speeches as well as on TV debates with other presidential contenders, Donald Trump repeatedly mentioned that he has a ‘secret plan’ for defeating the Islamic State without elaborating what the plan is? To the careful observers of the US-led war against the Islamic State in Iraq and Syria, however, the outlines of Trump’s ‘secret plan’ to defeat the Islamic State, particularly in Syria, have now become obvious.

As far as the fight against the Islamic State in Iraq is concerned, the Trump administration has continued with the policy of its predecessor. The Trump administration’s policy in Syria, however, has been markedly different from the regime change policy of the Obama administration. Unlike Iraq, where the US has provided air and logistical support to Iraq’s armed forces and allied militias in their battle to retake Mosul from the Islamic State militants, the conflict in Syria is much more complex that involves the Syrian government, the opposition-affiliated militant groups and the Kurds.

Regarding the recapture of Palmyra from the Islamic State by the Syrian government forces, a March 2 article in the Washington Post carried a rather paradoxical headline: “Hezbollah, Russia and the US help Syria retake Palmyra” [1]. The article by Liz Sly offers clues as to how the Syrian conflict has transformed under the new Trump administration. Further, according to a March 31 article [2] for the New York Times by Michael Gordon, the US ambassador to the UN, Nikki Haley, and the Secretary of State, Rex Tillerson, have stated on the record that defeating the Islamic State in Syria and Iraq is the first priority of the Trump administration and the fate of Bashar al-Assad is of least concern to the new administration.

Under the previous Obama administration, the evident policy in Syria was regime change, and any collaboration with the Syrian government against the Islamic State was simply not on the cards. The Trump administration, however, looks at the crisis in Syria from an entirely different perspective, a fact which is obvious from Donald Trump’s statements on Syria during the election campaign, and more recently by the statements of Nikki Haley and Rex Tillerson. Moreover, unlike the Obama administration which was hostile to Russia’s interference in Syria, the Trump administration is on friendly terms with Assad’s main backer in Syria, Vladimir Putin.

It is stated in the aforementioned article by Liz Sly that the US carried out 45 air strikes in the vicinity of Palmyra against the Islamic State’s targets in the month of February alone, which must have indirectly helped the Syrian government troops and the allied Hezbollah militia recapture Palmyra along with Russia’s air support.

Although expecting a radical departure from the six-year-long Obama administration’s policy of training and arming Sunni militants against the Shi’a-led Syrian government by the Trump administration is unlikely, however, the latter regards Islamic jihadists as a much bigger threat to the security of the US than the former. Therefore, some indirect support and a certain level of collaboration with Russia and the Syrian government against radical Islamists cannot be ruled out.

What has been different in the respective Syria policy of the two markedly different US administrations, however, is that while the Obama administration did avail itself of the opportunity to strike an alliance with the Kurds against the Islamic State in Syria and Iraq, but it was simply not possible for it to come up with an out of the box solution and use the Shi’a-led government and allied militias against the Sunni Arab militant groups, particularly the Islamic State. The Trump administration, however, is not hampered by the botched legacy of the Obama administration in Syria, and therefore it has been willing to some extent to cooperate with the Kurds as well as the Russians and the Syrian government against the Islamic jihadists in Syria.

Two obstacles to such a natural alignment of interests, however, are: first, Israel’s objections regarding the threat that Hezbollah poses to its regional security; and second, Turkey, which is a NATO member and has throughout nurtured several Sunni militant groups during the six-year-long conflict, would have serious reservations against the new US administration’s partnership not only with the Russians and the Syrian government but also with the PYD/YPG Kurds in Syria, which Turkey regards as an offshoot of the separatist PKK Kurds in southeast Turkey.

Therefore, in order to allay the concerns of Washington’s traditional allies in the Middle East, the Trump administration has conducted a cruise missiles strike on al-Shayrat airfield in Homs governorate on April 6 after the chemical weapons strike in Khan Sheikhoun, but that isolated incident was nothing more than a show of force to bring home the point that the newly elected president, Donald Trump, is a ‘powerful and aggressive’ president, while behind the scenes he has been willing to cooperate with Russia in Syria in order to contain and eliminate the threat posed by Islamic jihadists to the security of the US and the rest of the world.

It would be pertinent to mention here that unlike the dyed-in-the-wool politicians, like Barack Obama and Hillary Clinton, who cannot look past beyond the tunnel vision of political establishments, it appears that Donald Trump not only follows news from conservative mainstream outlets, like the Fox News, but he has also been familiar with alternative news perspectives, such as Breitbart’s, no matter how racist and xenophobic.

Thus, Donald Trump is fully aware that the conflict in Syria is a proxy war initiated by the Western political establishments and their regional Middle Eastern allies against the Syrian government. And he is also mindful of the fact that the militants have been funded, trained and armed in the training camps located in the Turkey-Syria border regions to the north of Syria and the Jordan-Syria border regions to the south of Syria.

Finally, Karen De Young and Liz Sly made another startling revelation in a March 4 article [3] for the Washington Post that: “Trump has said repeatedly that the US and Russia should cooperate against the Islamic State, and he has indicated that the future of Russia-backed Assad is of less concern to him.” Thus, it appears, that the interests of all the major players in Syria have converged on defeating the Islamic jihadists, and the Obama era policy of regime change has been put on the back burner for all practical purposes.