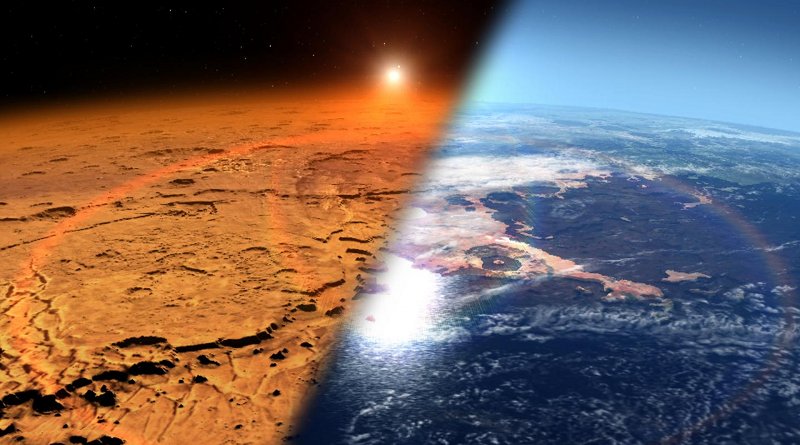 A type of Martian aurora first identified by NASA’s MAVEN spacecraft in 2016 is actually the most common form of aurora occurring on the Red Planet, according to new results from the mission. The aurora is known as a proton aurora and can help scientists track water loss from Mars’ atmosphere.

At Earth, aurora are commonly seen as colorful displays of light in the night sky near the polar regions, where they are also known as the northern and southern lights. However, the proton aurora on Mars happens during the day and gives off ultraviolet light, so it is invisible to the human eye but detectable to the Imaging UltraViolet Spectrograph (IUVS) instrument on the MAVEN (Mars Atmosphere and Volatile EvolutioN) spacecraft.

MAVEN’s mission is to investigate how the Red Planet lost much of its atmosphere and water, transforming its climate from one that might have supported life to one that is cold, dry, and inhospitable. Since the proton aurora is generated indirectly by hydrogen derived from Martian water that’s in the process of being lost to space, this aurora could be used to help track ongoing Martian water loss.

“In this new study using MAVEN/IUVS data from multiple Mars years, the team has found that periods of increased atmospheric escape correspond with increases in proton aurora occurrence and intensity,” said Andréa Hughes of Embry-Riddle Aeronautical University in Daytona Beach, Florida. Hughes is lead author of a paper on this research published in the Journal of Geophysical Research, Space Physics. “Perhaps one day, when interplanetary travel becomes commonplace, travelers arriving at Mars during southern summer will have front-row seats to observe Martian proton aurora majestically dancing across the dayside of the planet (while wearing ultraviolet-sensitive goggles, of course). These travelers will witness firsthand the final stages of Mars losing the remainder of its water to space.” Hughes is presenting the research on December 12 at the American Geophysical Union meeting in San Francisco.

Different phenomena produce different kinds of aurora. However, all aurora at Earth and Mars are powered by solar activity, whether it be explosions of high-speed particles known as solar storms, eruptions of gas and magnetic fields known as coronal mass ejections, or gusts in the solar wind, a stream of electrically conducting gas that blows continuously into space at around a million miles per hour. For example, the northern and southern lights at Earth happen when violent solar activity disturbs Earth’s magnetosphere, causing high velocity electrons to slam into gas particles in Earth’s nightside upper atmosphere and make them glow. Similar processes generate Mars’ discrete and diffuse aurora – two types of aurora that were previously observed on the Martian nightside.

Proton aurora form when solar wind protons (which are hydrogen atoms stripped of their lone electrons by intense heat) interact with the upper atmosphere on the dayside of Mars. As they approach Mars, the protons coming in with the solar wind transform into neutral atoms by stealing electrons from hydrogen atoms in the outer edge of the Martian hydrogen corona, a huge cloud of hydrogen surrounding the planet. When those high-speed incoming atoms hit the atmosphere, some of their energy is emitted as ultraviolet light.

When the MAVEN team first observed the proton aurora, they thought it was a relatively unusual occurrence. “At first, we believed that these events were rather rare because we weren’t looking at the right times and places,” said Mike Chaffin, research scientist at the University of Colorado Boulder’s Laboratory for Atmospheric and Space Physics (LASP) and second author of the study. “But after a closer look, we found that proton aurora are occurring far more often in dayside southern summer observations than we initially expected.” The team has found proton aurora in about 14 percent of their dayside observations, which increases to more than 80 percent of the time when only dayside southern summer observations are considered. “By comparison, IUVS has detected diffuse aurora on Mars in a few percent of orbits with favorable geometry, and discrete aurora detections are rarer still in the dataset,” said Nick Schneider, coauthor and lead of the IUVS team at LASP.

The correlation with the southern summer gave a clue as to why proton aurora are so common and how they could be used to track water loss. During southern summer on Mars, the planet is also near its closest distance to the Sun in its orbit and huge dust storms can occur. Summer warming and dust activity appear to cause proton auroras by forcing water vapor high in the atmosphere. Solar extreme ultraviolet light breaks the water into its components, hydrogen and oxygen. The light hydrogen is weakly bound by Mars’ gravity and enhances the hydrogen corona surrounding Mars, increasing hydrogen loss to space. More hydrogen in the corona makes interactions with solar-wind protons more common, making proton aurora more frequent and brighter.

“All the conditions necessary to create Martian proton aurora (e.g., solar wind protons, an extended hydrogen atmosphere, and the absence of a global dipole magnetic field) are more commonly available at Mars than those needed to create other types of aurora,” said Hughes. “Also, the connection between MAVEN’s observations of increased atmospheric escape and increases in proton aurora frequency and intensity means that proton aurora can actually be used as a proxy for what’s happening in the hydrogen corona surrounding Mars, and therefore, a proxy for times of increased atmospheric escape and water loss.”

This research was funded by the MAVEN mission. MAVEN’s principal investigator is based at the University of Colorado’s Laboratory for Atmospheric and Space Physics in Boulder, Colorado, and NASA Goddard manages the MAVEN project. NASA is exploring our Solar System and beyond, uncovering worlds, stars, and cosmic mysteries near and far with our powerful fleet of space and ground-based missions.