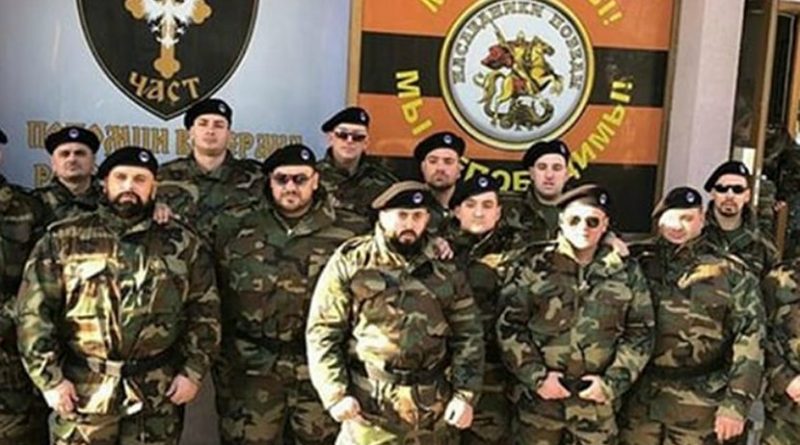 Zurnal published photographs of the militia on the streets of Banja Luka, posing in military fatigues. Photo: Žurnal

By Mladen Lakic and Danijel Kovacevic

The Russian embassy and the office of the Bosnian Serb president have dismissed reports of a Russian-trained Bosnian Serb paramilitary unit as scaremongering.

The presidency of Bosnian Serb’s entity Republika Srpska and Russia’s embassy to Bosnia in separate statements on Saturday dismissed as “dangerous” reports that Bosnian Serb paramilitary units are being formed under the joint auspices of the President of Republika Srpska, Milorad Dodik, and of Moscow.

“The [claim] that appeared on certain websites that President … Dodik with the support of Moscow is forming paramilitary units are extremely dangerous and are not in the function of informing citizens,” the presidency of Bosnia’s Serb-led entity said in a written statement.

“This is also confirmed by the fact that the author of the controversial text did not invite any verifiable facts that would indicate the accuracy of his allegations of the formation of such units in the Republika Srpska,” the statement added, noting that the cabinet of the Republika Srpska leader discarded such speculation.

On Friday, the local website Zurnal reported that a militia called “Serbian Honour”, which it said had been trained in the Russian-funded centre in Nis, Serbia, was in the process of setting up a paramilitary group that would used if need be against Dodik’s opponents.

The report included a picture of the group reportedly taken on Bosnian Serb entity’s “Statehood Day” on January 9 in Banja Luka, says one of the group’s leaders, Bojan Stojković, is a former Serbian paratrooper who trained in Moscow and had been awarded a medal there by a Russian general.

The report on the news site comes at a time of mounting concern in the West about Russian efforts to destabilise the Balkans in order to slow NATO enlargement in the region.

On Friday, Dragan Mektić, Bosnia’s security minister and member of the Serbian Democratic Party, the main opposition party in Republika Srpska, said the intelligence and security services were aware of the presence and activities of the group.

“There is information about this whole matter; we even managed to document certain things. In the end, you saw people in uniforms in the pictures; that it is enough for it to be taken seriously,” Mektic told BIRN on Saturday.

“I do not expect the Prosecution to work on this case, based on their previous work, but will send them documentation at the beginning of the next week, that is the only way we can work,” Mektic added.

He could not comment further on details in the report, he said. Last year, Mektic accused Dodik of being involved in different criminal affairs, but none of the accusations ended up in a court case.

Russia’s embassy to Bosnia on Saturday meanwhile dismissed the accusation as nonsense and fabrication.

“We do not consider it worthwhile to comment on this stupidity and series of ridiculous fabrications that have been transmitted by some media,” the embassy said in a statement.

Srdjan Puhalo, Banja Luka-based political analyst, told BIRN that whether true or not, any reports about paramilitary units would raise tensions in the country, especially ahead of general elections due in the autumn.

“This can also be seen as part of the election campaign. Above all, it is about creating a climate of distrust and fear, which is the result of the calculation of domestic politicians,” he said.

“Information about alleged paramilitary units often appears in Bosnia, but without any concrete evidence,” he added.

“Not so long ago, we had a similar story in the Federation [entity] when a member of the Bosnian Presidency, Bakir Izetbegovic, was accused of creating a private army,” he noted.

In November, the Serbian newspaper Vecernje Novosti reported that Izetbegovic is forming a secret military unit which also created tension even though no evidence for it emerged.

It turned out that the story was based on the activities of the Airsoft Club in Bosnia. Members said that a TV station based in Banja Luka had used pictures of their members to publish lies.

Turning to the group alleged formed in the RS, Puhalo continued: “This group in the RS is marginal. They have no influence; they do not matter except they look scary. However, they have now become famous.”