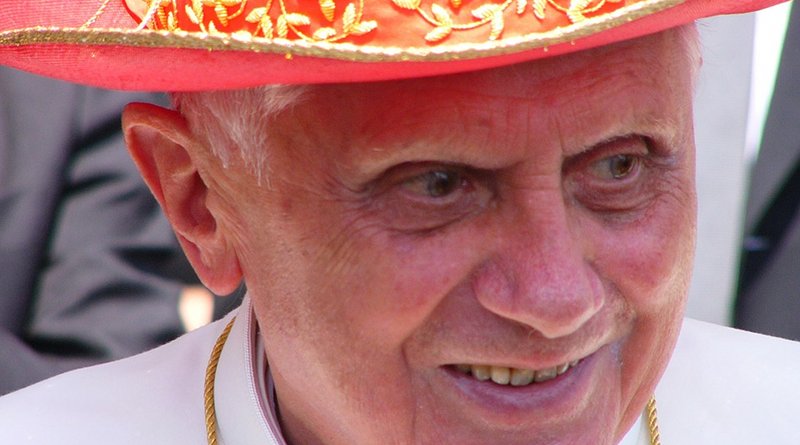 Cardinal Robert Sarah said Monday that claims Pope Emeritus Benedict XVI did not co-author with him a new book on priestly celibacy are “defamations of exceptional gravity.”

The publisher of the book told CNA that critics suggesting that the pope emeritus did not co-author the book, or authorize its publication, are wrong.

“Are these people really implying that Cardinal Sarah is involved in a conspiracy to distort the truth?” Father Joseph Fessio, SJ, editor-in-chief of Ignatius Press, asked Jan. 13.

“If Cardinal Sarah is telling [Ignatius Press] that the chapters from Pope Benedict are from Pope Benedict, we take his word for it,” Fessio said, adding that the publisher stands by its attribution of the book to both Sarah and Benedict.

The priest’s comments were a response to a tweet from Eva Fernandez, Vatican correspondent for COPE Radio, a radio station owned by the Spanish bishops’ conference.

Fernandez tweeted that “a source” close to Benedict XVI had told her that Benedict did not write the book with Sarah, or give authorization for its publication.

Fernandez said that Benedict “only made available a text about the priesthood on which he was working.”

Fessio, a long-time friend of the pope emeritus, told CNA that was untrue.

“Regarding Ignatius Press: we don’t do ‘fake news’” he told CNA.

The book, “From the Depths of Our Hearts,” will consist of chapters written individually by Benedict and Sarah, as well as an introduction and conclusion reportedly credited jointly to them in the French edition, although the text has not yet been published.

On January 13, Sarah tweeted a series of letters from Benedict XVI, that seemed to affirm that the pope emeritus wrote the chapter attributed to him and authorized its publication. The letters also seemed to indicate that Sarah had edited the text provided by Benedict.

“Attacks seem to imply a lie on my part. These defamations are of exceptional gravity. I give this evening the first proofs of my close collaboration with Benedict XVI to write this text in favor of celibacy,” Sarah wrote.

In the book, Benedict and Sarah argue that priestly celibacy is not merely an optional feature of Church life today, but an ontological necessity for the priesthood.

The introduction to the book says that it arose from a series of meetings in recent months between Benedict XVI and Cardinal Robert Sarah, “while the world was echoing with the din created by a strange media synod that overrode the real Synod.”

Some voices at the October 2019 synod made a case for the priestly ordination of married men in the Amazon region, ostensibly as a response to a lack of vocations. But other synod participants said that the lack of priests in the Amazon region is not caused by the obligation of priestly celibacy, and that the Church must pray for vocations and strengthen priestly formation in the region.

Cardinal Sarah was among the synod participants opposed to the idea of relaxing ecclesial discipline on celibacy.

Priestly celibacy is also on the agenda of the “binding synodal process” undertaken by the Church in Germany.

Responding to this ongoing discussion, Benedict and Sarah are releasing “From the Depths of Our Hearts,” published in English by Ignatius Press. It can now be preordered, and is due to ship Feb. 20. It is due to be published in French this week.

“At the foundation of the serious situation in which the priesthood finds itself today, we find a methodological flaw in the reception of Scripture as Word of God,” Benedict said.

Abandoning a Christological interpretation of the Old Testament has led to a “deficient theology of worship” among many modern scholars, who fail to recognize that Jesus fulfilled the worship owed to God, rather than abolishing it, he continued.

Looking at the history of the priesthood in the Old Testament, Benedict said that “the relation between sexual abstinence and divine worship was absolutely clear in the common awareness of Israel.”

He noted that the priests of Israel were required to observe sexual abstinence during their time that they spend leading worship, when they were “in contact with the divine mystery.”

Since the entire life of the priest in the New Covenant is “in contact with the divine mystery,” he said, it demands “exclusivity with regard to God” and becomes incompatible with marriage, which also requires one’s whole life.

“From the daily celebration of the Eucharist, which implies a permanent state of service to God, was born spontaneously the impossibility of a matrimonial bond. We can say that the sexual abstinence that was functional was transformed automatically into an ontological abstinence. Thus its motivation and its significance were changed from within and profoundly.”

The pope emeritus rejected the idea that priestly celibacy is based on a contempt for human sexuality within the Church. He noted that this claim was also dismissed by the Church Fathers, and that the Church has always viewed marriage as a gift from God.

“However, the married state involves a man in his totality, and since serving the Lord likewise requires the total gift of a man, it does not seem possible to carry on the two vocations simultaneously,” he said. “Thus, the ability to renounce marriage so as to place oneself totally at the Lord’s disposition became a criterion for priestly ministry.”

Just as the priests from the Tribe of Levi renounced ownership of land, priests in the New Covenant renounce marriage and family, as a sign of their radical commitment to God, he said.

This is seen in the Psalm prayed when a man entered the clergy before the Second Vatican Council, he said: “The LORD is my chosen portion and my cup; you hold my lot. The lines have fallen for me in pleasant places; yes, I have a goodly heritage.”

Benedict’s theological reflection is followed in the book by a set of pastoral considerations from Sarah.

“My bishop’s heart is worried. I have met with many priests who are disoriented, disturbed and wounded in the very depths of their spiritual life by the violent challenges to the Church’s doctrine,” Sarah said.

“I speak up so that everywhere in the Church, in a spirit of true synodality, a calm, prayerful reflection on the spiritual reality of the sacrament of Holy Orders can commence and be renewed.”

The cardinal called priestly celibacy “the expression of the intention to place oneself at the disposal of the Lord and of men and women,” adding that “Priestly celibacy, far from being merely an ascetical discipline, is necessary to the identity of the Church.”

Ordaining married men would create a “pastoral catastrophe,” risking the Church’s understanding of both the priesthood and itself, Sarah warned. “If we reduce priestly celibacy to a question of discipline, of adaptation to customs and cultures, we isolate the priesthood from its foundation.”

“This total delivering of himself in Christ is the condition for a total gift of self to all men and women,” he said. “He who has not given himself totally to God is not given perfectly to his brethren.”

While some exceptions exist – such as when some married Protestant pastors become Catholic and are able to be ordained priests – the shortage of priests in isolated areas is not such an exception, he said.  Ordaining married men in these communities “would prevent them from giving rise to priestly vocations of celibate priests,” which would create “a permanent state detrimental to the correct understanding of the priesthood.”

Sarah questioned whether the call for married priests among “isolated, poorly evangelized populations” is intended “to prevent them from discovering the fullness of the Christian priesthood.”

The cardinal said that he has met with isolated communities who were living the faith through prayer and scripture without the support of priests and sacraments, similar to the situation faced by some communities in the Amazon. He recalled their “unimaginable joy” at being able to participate in a celebration of the Mass.

“Allow me to state forcefully and with certainty: I think that if they had ordained married men in each village, they would have extinguished the Eucharistic hunger of the faithful,” he said. Ordaining married men would prevent young Churches from the experience of seeing themselves as the Bride of Christ and encountering Christ as Bridegroom through the radical encounter of a celibate priest, he said.

Sarah added that he would not be a priest today if it were not for his encounter with celibate missionary priests in his youth, because it was the radical nature of their lives that impacted him.

The cardinal also argued that “[t]he Eastern married clergy is in crisis,” pointing to comments by some members of these Churches noting tension between the priestly and married states, as well as the problem of divorce by priests.

He also rejected calls for female ordination, while encouraging a deeper study of “the feminine charism,” in order to properly recognize the role and contributions of women in the Church.

Concluding their work, Benedict and Sarah encouraged the discussion surrounding celibacy in the Church to be carried out with a proper understanding of the nature of the priesthood.

“It is urgent and necessary for everyone—bishops, priests and lay people—to stop letting themselves be intimidated by the wrong-headed pleas, the theatrical productions, the diabolical lies and the fashionable errors that try to put down priestly celibacy,” they said.

They called for priestly celibacy to be examined through a “fresh look with the eyes of faith.”

On Jan. 13, Andrea Tornielli, editorial director for the Vatican’s Dicastery for Communications, wrote an op-ed praising the book.

“Ratzinger and Sarah — who describe themselves as two Bishops ‘in filial obedience to Pope Francis’ who ‘are seeking the truth’ in ‘a spirit of love for the unity of the Church’ — defend the discipline of celibacy and put forth the reasons that they feel counsel against changing it,” Tornielli wrote.